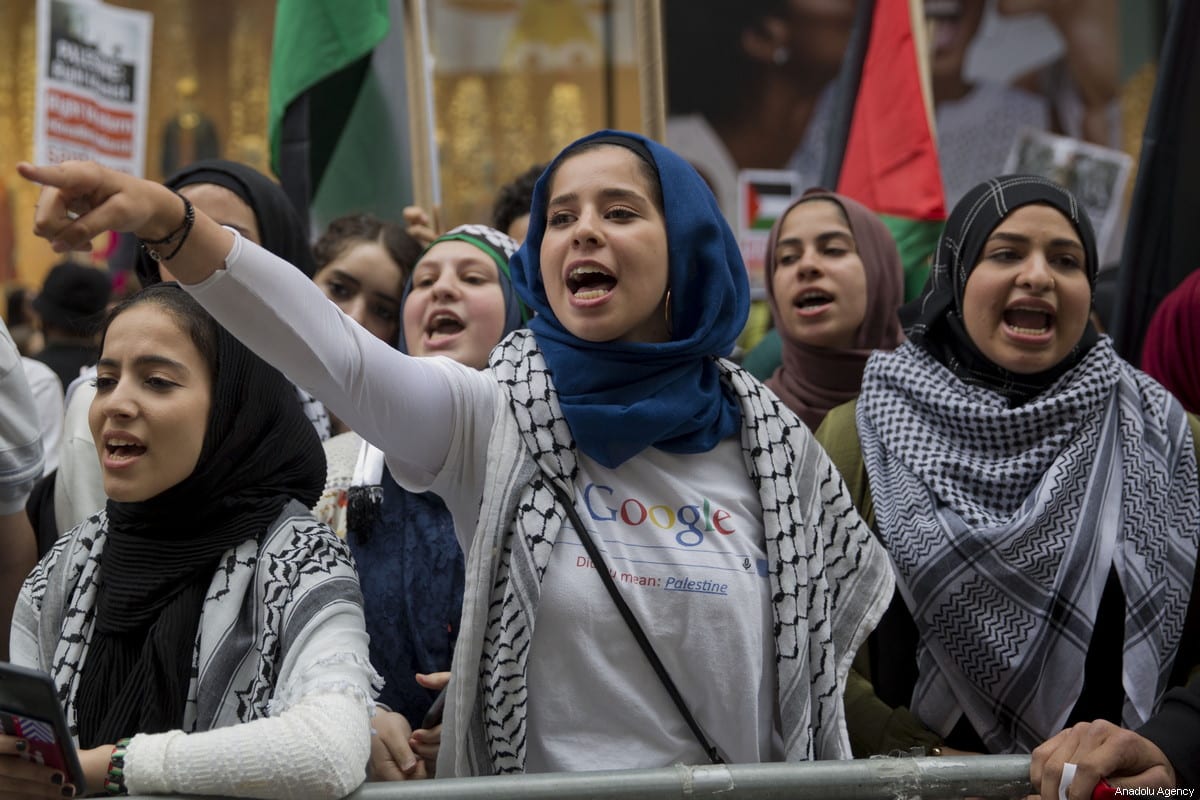 Women take part in a demonstration, organized to mark the 70th anniversary of Nakba, also known as Day of the Catastrophe in 1948, and against the Israeli violence in Gaza on May 18, 2018 at Times Square in New York, United States. ( Mohammed Elshamy - Anadolu Agency )

What do you get when you create a collaboration of activists who share a common cause against the abuse of women but who also come from varying backgrounds of social justice and civil rights activism, and then throw in the Israel-Palestine conflict for good measure? A full-blown war, that's what, driven by fanatics on both sides who readily tear apart a good cause for their own selfish agendas, and hurl racial epithets in the process.

That's what is happening with the Women's March, a worldwide movement launched spontaneously following the election of Donald Trump as US President, to protest against his open misogyny, a typical contempt and prejudice against women that most male politicians and corporate leaders manage to disguise from the public. However, Trump didn't disguise that or other typical traits among the world's male elite including racism, xenophobia and political hypocrisy.

The January 2017 Women's March brought together between 500,000 and 1,000,000 women and men, and was recognised as one of the largest single-day protests in US history. The organisers included women from across the political, ethnic and religious spectrum, including Jews, Christians, Muslims, Arabs, Israelis, Europeans, Africans, Hispanics, Asians and Americans.

Of course, when the collective eye is taken off the objective of confronting misogyny, then noble relationships can crumble quickly. Stereotypical "bickering" might be the most obvious cause at first glance. Dig a little deeper, though, and you can see that the disintegration is due to pressures from outside forces with agendas that are not as broad as defending the rights of women. Add to this some powerful lobbying by dark groups such as Zionists, anarchists and political fanatics emboldened by mainstream American News Media bias, and you have all-out war.

Palestine: Read all about it… but not in the mainstream media

It didn't take long for it to happen. A Women's March planned to take place in Chicago, America's second largest city racked by violence and racism, and dominated by male egos and corporate power, was cancelled as pro-Israel journalists from the New York Times, the Chicago Tribune and the Washington Post began tearing the leadership apart, not over women's issues, but the hyperbolic debate over Israel's human rights abuses and apartheid policies.

I know Sarsour, who has evolved many times as an activist, finally hitting the leadership lottery a few years back. She was once a foe of the two-state solution who launched a vicious attack against me when I expanded my public advocacy for Palestinian rights launching the Israeli-Palestinian Comedy Tour, which featured stand-up comedy performed by myself, an African American Jew and two Israeli comedians, in 2007.

Sarsour was on the front line of attacks against me when I was elected as a national board member of the American Arab Anti-Discrimination Committee. I had been an activist supporting the ADC since the group was founded in 1980 and attended the first founders' meeting along with James Abourezk, Ayoub Talhami and others in Chicago. I served for decades as its Chicago board member and spokesman.

However, in the past decade, a number of anti-peace haters have targeted moderate voices in the Palestinian activist community who support compromise over the alternative of continued violence, suffering and Israel's successful erasure of Palestinian identity. Such haters have battled to undermine the ADC.

Angered that I would dare to appear on a stage with actual Israelis – instead of just Jews, as other comedians were doing – I came under fire from the fanatical right. Sarsour and her cohort also falsely accused me of being behind an ADC effort to censor Syrian pianist Malek Jandali in 2011 because a song he planned to perform at the ADC's national convention that year appeared to be critical of the organisation's alliances with the Syrian government, relations of which I had no knowledge.

Having been a journalist behind award winning op-ed commentaries for decades, however, I was used to vicious attacks on myself personally. They actually empower me to charge forward.

Sarsour moved on to bigger fish but it's not surprising that her uncompromising ways hailed by the emotionally charged Arab and Muslim community have seen the focus on her as the spark for the latest assertions.

I may not agree with Sarsour's style, but she, like all advocates of Palestinian rights, stand on a foundation of factual righteousness. The Palestinian people have been brutalised viciously by Israel's official policies over the years; subjected to unprosecuted war crimes and escalating Apartheid discrimination; targeted for "extra-judicial" murders; and had their land and property confiscated in violation of every level of international law. These abuses are enabled by the intentional blindness of a prejudiced mainstream US news media, which not surprisingly doesn't distinguish between Sarsour and I.

The abuses by Israel's government against Palestinians can be compared cumulatively to the early Nazi persecution of Jews in Europe before the start of World War Two. What Israel's government is doing to the Palestinians is not the same as the Holocaust, though; that was an inhuman programme of unprecedented proportions in which Jews were targeted and exterminated methodically on an industrial scale. Nevertheless, that does not take anything away from the illegal and morally reprehensible treatment of the Palestinians by Israel.

Sarsour — and, indeed, most Palestinians — can't help herself. Another Palestinian activist who won a seat in the US Congress last month, Rashida Tlaib, was also among those attacking me.

READ: When Illness is a 'Death Sentence': The Victimization of Gaza Women

Extreme emotions dominate our lives, and tend to be driven by the extreme hardships and injustice faced by our people. A vicious world of racism and discrimination injures us all, forcing us to use every means possible to defend ourselves against the onslaught of media bias, libel and bullying from mainstream society. We are excluded, branded and denied equal rights until we place ourselves in the vanguard of the fight for justice.

While Sarsour and her allies were attacking me for my comedy appearances, they ignored the fact that the real threat was coming from Jews with extreme views such as comedian and actor Jackie Mason, who refused to allow me to open for him during appearances I had arranged through a Chicago comedy club in 2002. Mason originally thought I was "just" an Arab, but when he learned I was Palestinian and an activist who criticised Israeli brutality and illegal settlements, he launched a vicious campaign against me, and refused to speak with me during live appearances on national TV programmes including The Today Show, Good Morning America and CNN.

If Palestinians want to help their people, they need to be smart, strategic and cunning. Meeting with people like Louis Farrakhan of the Nation of Islam is not a wise move and takes our people in the wrong direction. It also opens the door to false accusations of anti-Semitism.