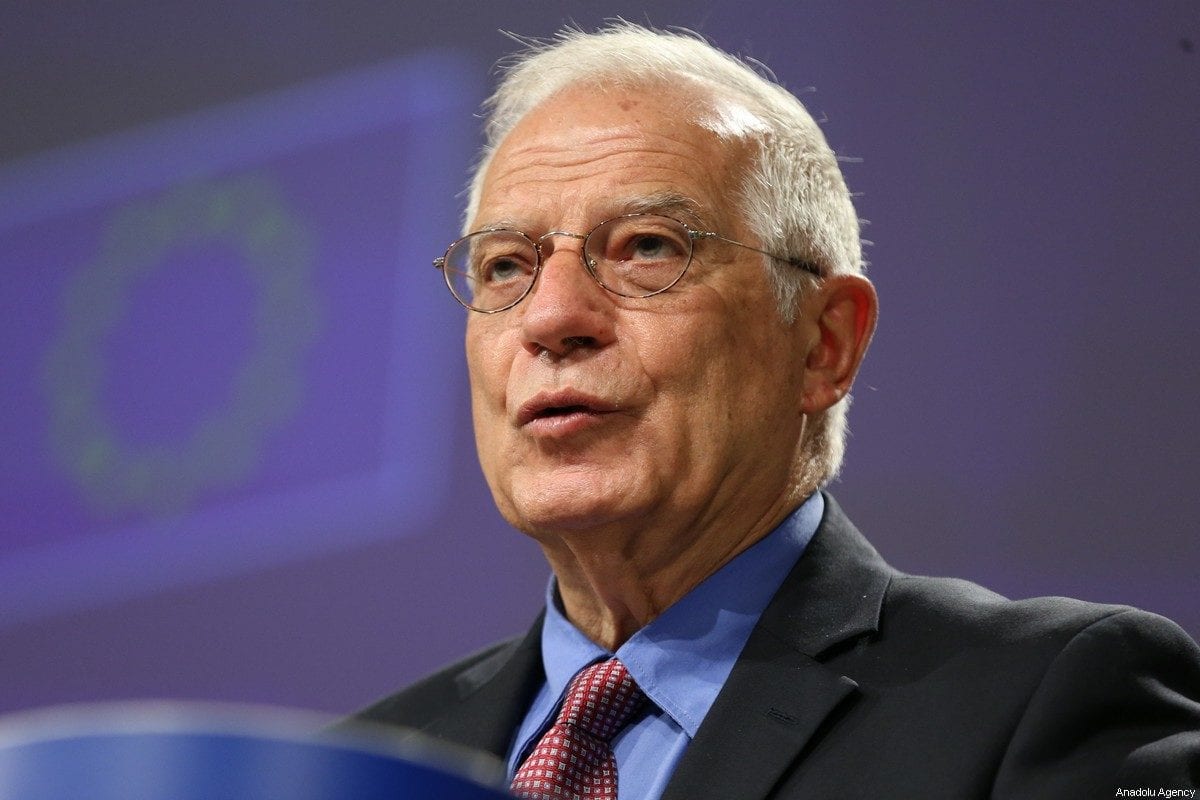 European High Representative of the Union for Foreign Affairs, Josep Borrell at a press conference in Brussels, Belgium on 9 June 2020 [Dursun Aydemir/Anadolu Agency]

It was not a half-hearted scramble by the EU to get Israel to abide by international law, but rather another manoeuvre biding time to rekindle suspended diplomatic meetings. Following a meeting of Israel's Foreign Minister Gabi Ashkenazi with his EU counterparts in Berlin, the bloc is seeking to reinstate the annual meeting of the EU-Israel Association Council. The call for this has the backing of the EU's High Representative for Foreign Affairs, Josep Borrell.

In February this year, reinstating the meetings was brought up as a parliamentary question in which member states opposed to the meetings were described as "harming the advancement of EU-Israel relations and progress towards peace and understanding in the Middle East." The meetings – the last of which was held in 2012 – were stopped due to Israel's ongoing settlement expansion. If the meetings are reinstated, the EU will be making a clear statement that it no longer deems colonial expansion to be an obstacle to peace.

The backdrop for this possible turn of events is the UAE-Israel normalisation agreement. Barring a few exceptions, Israel's decision to suspend, but not cancel, its annexation plans have been hailed as a breakthrough and an opportunity to restart negotiations based upon the two-state compromise. Instead of denouncing the agreement as an opportunity to cultivate Israeli impunity, the international community prostrated itself towards Tel Aviv at the news of an agreement that only postponed Israel's formalisation of its colonial — and entirely illegal — appropriation of Palestinian land. The UAE's normalisation of ties with Israel is now a turning point for the EU to consider renewing its own suspended, diplomatic ties with colonialism.

When speaking about reinstating the annual EU-Israel Association Council meeting in 2017, Borrell's predecessor Federica Mogherini ignored the contradiction between the EU's position on settlement expansion and Israel's ongoing expropriation of Palestinian territory. The deviation from a question asked regarding any concern for Israel's accelerated expansion focused on bilateral relations with Israel, further proving that the Palestinian people and their political demands are insignificant as far as EU foreign policy is concerned. Good relations with Israel take priority, at all costs. The Palestinians are pawns written into the two-state compromise, whereas Israel is elevated as an equal partner with the EU in an otherwise discriminatory and pro-colonial agenda.

Upon the recent announcement, Euronews reported that Europe is "ready to work with both countries going forward," with reference to Israel and the UAE. The Palestinian people were just hinted at through the EU's commitment to the two-state paradigm. Clearly, the bloc's occasional opposition to annexation was simply the EU paying lip-service to international law, much like the UN.

"The normalisation will be at the benefit of both, it is important for both and the region's stability," declared Nabila Massrali, spokeswoman for the EU Commission. Normalising Israel's suspension of annexation is equivalent to normalising Israeli Prime Minister Benjamin Netanyahu's decision to annex Palestinian territory at a later, as yet undisclosed, date. The EU should stop exploiting the Palestinian people for their diplomatic gains; one of the reasons behind the stalling of any agreement upon punitive measures for Israel has been revealed. If the Palestinian Authority has any shard of political conscience and self-respect left, it would do well to stop chasing the illusion of diplomatic allies in Europe. It doesn't have any.