Torture in Tunisia: 'I was sexually abused in the interior ministry's building'

Painful testimonies by Tunisians who suffered during the Ben Ali reign
November 23, 2016 at 4:58 pm | Published in: Africa, News, Tunisia 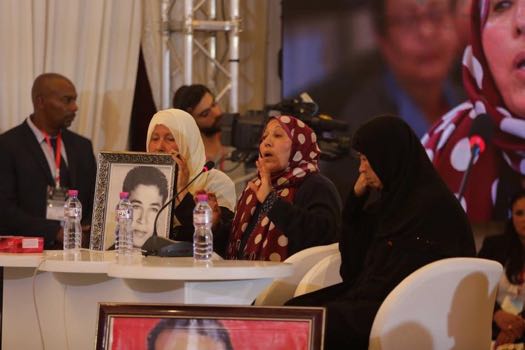 Relatives of torture victims on Day 1 of the public hearing of Tunisia’s Truth and Dignity Commission [ictj.org]
November 23, 2016 at 4:58 pm

The victims of despotic rule during the reign of Zine El Abidine Ben Ali in Tunisia have spoken, telling stories of bodily violations and torture to which they were subjected. These are the first testimonies of their kind made in public and historic hearings as part of the steps of transitional justice six years after an uprising brought to an end to Ben Ali's rule.

Local and foreign TV channels broadcast live the public hearings of victom in a measure described as historic for the country that is endeavouring to bolster the gains of its nascent democracy in the aftermath of free elections held in 2011 and 2014 and the introduction of a new constitution.

Sihem Bensedrine, the chairperson of the Truth and Dignity Commission, who oversees the process of transitional justice, said: "The hearing sessions constitute an important historic event for all Tunisians and will be taught to forthcoming generations, one after the other, and will bolster Tunisia's image in the world as one of tolerance."

Khalid Al-Krishi, the head of the Judgment and Reconciliation Committe, told journalists: "Through the hearing sessions we shall participate in exposing the reality of the violations (..) so as to turn this page over and proceed directly to national reconciliation."

He added that those who will testify during the open hearing sessions "do not represent just themselves" but represent "complete generations from all the political currents as well as human rights activists, journalists, trade unionists and students."

Torture in Tunisia: Unravelling the truth'

Torture in Tunisia: 'They removed the nails from my toes'

Torture in Tunisia: 'Their aim was to ensure prisoners were left mentally deranged'

In the first part of the confession hearings on Thursday night, some of the victims presented emotional confessions. There were also testimonies by families of young men who were shot dead by police during the uprising of 2011.

In 2011, a sweeping wave of anger against unemployment and corruption ended 23 years of the rule of Ben Ali, who then fled to Saudi Arabia. The smooth transition to democracy in Tunisia drew praise from the West after the new rulers of Tunisia reached an agreement that ended the exclusion of the former regime's officials from political life.

Yet, despite this agreement that paved the way for the return to government of a number of officials from the previous regime, many Tunisians believe that the perpetrated violations should not pass without accountability prior to moving toward reconciliation at a later stage.

One of the testimonies was by Sami Braham, an academic researcher who was detained after escaping and remaining on the run for a period of seven months during which he spent time hiding in cemeteries. His only crime was his opposition to the Ben Ali regime.

Braham said: "I was subjected to sexual abuse inside the interior ministry's building. I was subjected to all sorts of spiritual torture. That was degrading. They used to extinguish cigarette butts on my body."

Crying he added: "I just call on the torturers to confess and talk and I am prepared to forgive them … everything I hoped for was fulfilled the day someone called and said that Ben Ali has fled."

This week, Bensedrine said: "The purpose is not to seek gratification … there is no justification for such fears … Tunisians are tolerant, but only after responsibilities are determined."

In a talk on Thursday prior to the start of the testimonies, Bensedrine said: "From now on, Tunisia will never approve of human rights violations … today no voice is lounder than that of the victims' voices."

One of the testimonies was one given by a wife and a mother of a person who was killed under torture inside a police station during the reign of Ben Ali.

Fatimah, the wife of Kamal Al-Matmati, said that her husband was killed under torture inside the police station of Qabes on 7 October 1991, after having been suspected of affiliation to the Islamic movement.

Fatimah said she had no knowledge that her husband was killed until the eruption of the 2011 revolution. She added that for so many years she received no information whatsoever about her husband apart from the fact that he was kidnapped from his workplace.

The phase of public hearings comes after the government commission heard, in total secrecy behind closed doors, testimonies pertaining to 11,000 files over a period of three years.

Hundreds of local and foreign personalities have followed the public hearing sessions that are being held in the Sidi Bousaid district and more specifically within the premises of Alisah Club, the nightclub that used to be owned by Laila Ben Ali, the wife of the former president.

Sihem Bensedrine said that holding the sessions in the same venue that was once owned by the wife of the former president has a symbolic significance because this place was a symbol of corruption and despotism but has now returned to the people once more.

Bensedrine is a human rights activist who suffered constant harassment throughout the reign of Ben Ali. She was one of his fierce opponents and a well-known critic of his human rights record.

These sessions precede an international investment conference that will be held in Tunis at the end of the month to attract foreign investments and stimulate growth.

The Truth Commission says that these public hearings serve to promote the investment conference because foreign investors will learn that Tunisia is pursuing a course of transitional justice that aims to dismantle the system of despotism and corruption.

Other public hearings will be held on 17 December and then on 14 January. The dates symbolise the start of the uprising in Tunisia and when the former president escaped in 2011.

Public reconciliation sessions will be held on 17 December when perpetrators of violations or economic transgressions or human rights abuses will offer apologies to the victims of their actions.

Amnesty International issued a statement in which it described the hearings as "an historic opportunity to put an end to impunity from past crimes (…) and human rights abuses."

The organisation added that "such tradition of impunity still pervades reality" despite the recent "progress" in Tunisia.

Torture in Tunisia: 'They removed the nails from my toes'