In blow to Trump, US judges reject travel ban targeted at Muslims 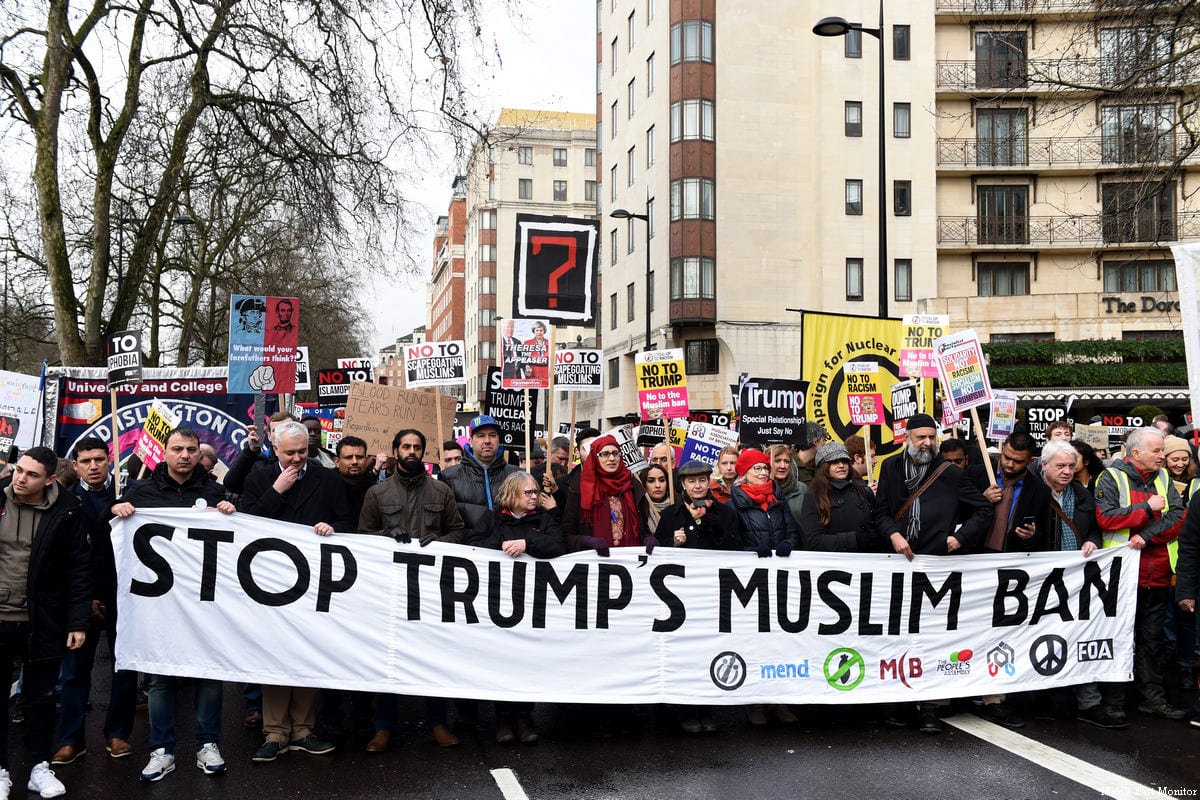 Protesters demonstrate against the US travel ban on seven Muslim-majority countries, in London, UK on 24 February 2017 [Kate Green/Anadolu Agency]
February 10, 2017 at 2:47 am

President Donald Trump suffered a legal blow on Thursday when a federal appeals court refused to reinstate a temporary travel ban he had ordered on people from seven Muslim-majority countries.

A three-judge panel of the 9th US Circuit Court of Appeals unanimously ruled that the Trump administration failed to offer "any evidence" that national security concerns justified the ban he launched with an executive order on Jan. 27.


Shortly after the court issued its 29-page ruling, Trump tweeted: "SEE YOU IN COURT, THE SECURITY OF OUR NATION IS AT STAKE!" He told reporters his administration ultimately would win the case and dismissed the ruling as "political."

SEE YOU IN COURT, THE SECURITY OF OUR NATION IS AT STAKE!

The Justice Department, which spoke for the government at oral argument on Tuesday, said it was reviewing the decision and considering its options.

The states of Washington and Minnesota challenged the order, which had sparked protests and chaos at US and overseas airports on the weekend after it was issued. The two states argued that Trump's ban violated constitutional protections against religious discrimination.

The court declined to evaluate those specific claims at this point, but said the government had failed to show that any person from the seven countries had perpetrated a terrorist attack in the United States.

The 9th Circuit ruling, upholding the Feb. 3 decision of US District Judge James Robart, does not resolve the lawsuit, but related only to whether Trump's order should be suspended while litigation proceeds. The ruling upholds the suspension.


Trump's Jan. 27 executive order barred entry for citizens from Iran, Iraq, Libya, Somalia, Sudan, Syria and Yemen for 90 days and imposed a 120-day halt on all refugees, except refugees from Syria who are barred indefinitely.

The three judges said the states had shown that even temporary reinstatement of the ban would cause harm.

Curbing entry to the United States as a national security measure was a central premise of Trump's 2016 presidential campaign, originally proposed as a temporary ban on all Muslims. He has voiced frustration at the legal challenge to his order.


US presidents have in the past claimed sweeping powers to fight terrorism, but individuals, states and civil rights groups challenging the ban said his administration had offered no evidence it answered a threat.

Two of the three 9th Circuit judges were appointees of former Democratic Presidents Jimmy Carter and Barack Obama, and one was appointed by former President George W. Bush, a Republican like Trump.

The government could ask the 9th Circuit to have a larger panel of judges review the decision "en banc," or appeal directly to the US Supreme Court, which will likely determine the case's final outcome.