'Dad, carry me' cries Syria child who has legs blown off by Assad regime

Syrian sources have confirmed that the child,'s name is Abdulbasit Ta’an Alstoof, who is approximately 8 years-old, lost both his legs by a regime barrel bomb attack
February 17, 2017 at 11:51 am | Published in: Middle East, News, Syria, Videos & Photo Stories

***WARNING: The following video contains graphic content that may not be suitable for all users***

Syrian social media activists have been circulating horrifying footage taken following an attack yesterday by the regime of President Bashar Al-Assad in northern Syria, showing a young child who has had his legs blown off in a barrel bomb attack perpetrated by the regime calling out to his father to carry him as people around him scream for an ambulance.

The attack happened in the district of Habeet in southern Idlib, one of Syria's northernmost provinces and also one of the Syrian opposition's last major territorial holdings which regularly comes under Assad regime attack, backed up by Russian airpower. 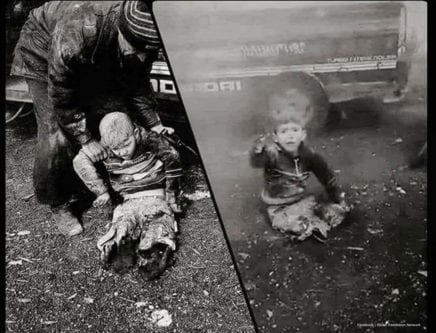 Syrian sources have confirmed that the child, Abdulbasit Ta'an Alstoof, who is approximately eight-years-old, was present during a regime barrel and thermobaric bomb attack targeting a residential block in Habeet yesterday. The attack killed four people, a woman and three of her children, as well as severely wounding seven others, including Abdulbasit.

The harrowing footage shows Abdulbasit being laid down on the floor as people shout for an ambulance to come to his aid, with Abdulbasit propping himself up and reaching out, screaming: "Carry me, daddy, carry me!"

Later on, a clearly traumatised Abdulbasit can be seen recuperating in one of the Syrian opposition's remaining field hospitals, frequently the target of Assad regime and Russian airstrikes. A man in the background can be heard trying to soothe him asking him about his health and wellbeing, as Abdulbasit stares on, horrified at what had just happened to him and the long-term impact that this will have on his life that had really only just begun.

The Syrian Revolution Network confirmed that the child suffered his horrific wounds following an Assad regime barrel bomb attack, and other activists caught the helicopter that conducted the bombing on camera.

Sources in Habeet confirmed that an Assad regime helicopter dropped two barrel bombs on a residential neighbourhood used only by civilians, with no armed factions present. The helicopter then departed the area, only to be replaced by a warplane that dropped a thermobaric bomb on the same area, leading to further casualties.

Thermobaric bombs, also known as vacuum bombs, are advanced and devastating weapons that cause immense shockwaves that can level entire buildings and decimate humans. Firing any weapons, but particularly such destructive bombs, on civilian areas is a war crime and a crime against humanity.

The Assad regime's latest attack that has irreparably destroyed Abdulbasit's life and others around him, comes despite the regime agreeing to a ceasefire with the anti-Assad opposition late last year, and despite ongoing peace talks in Geneva and Astana.