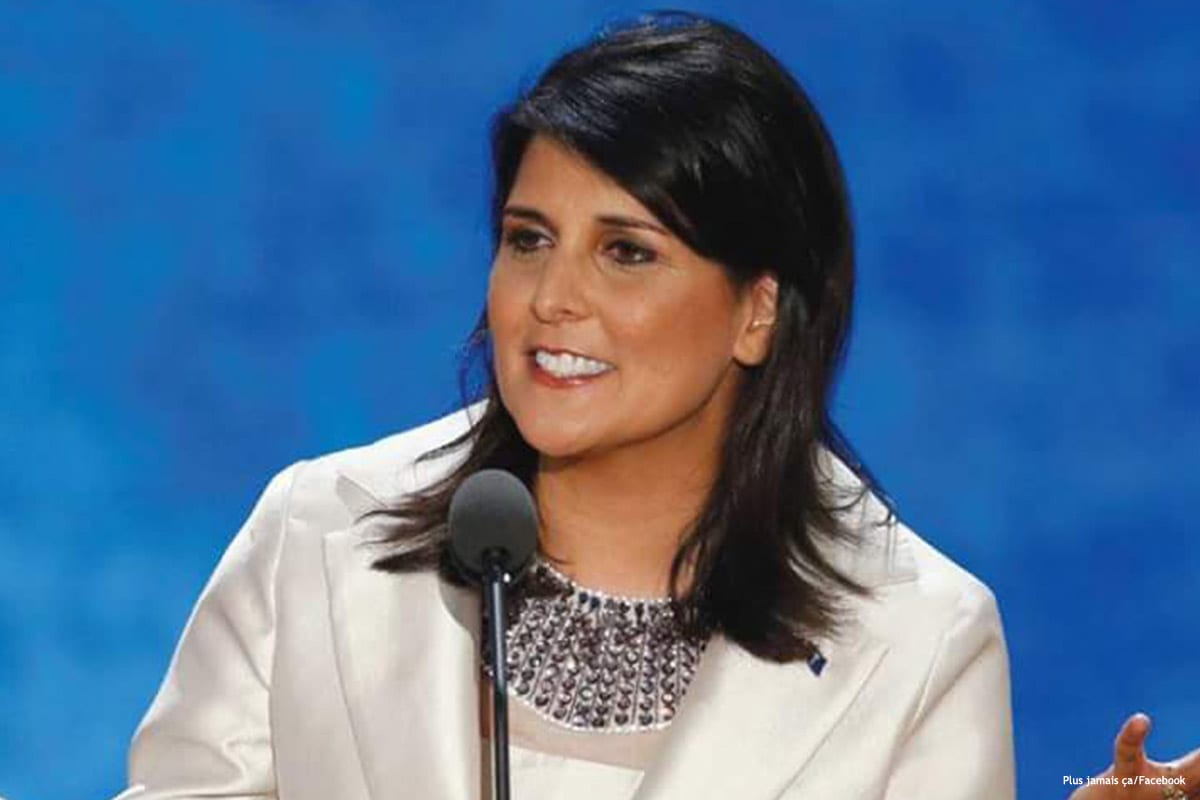 US Ambassador to the United Nations Nikki Haley said on Thursday the United States still supports a two-state solution to the Israeli-Palestinian conflict, a day after President Donald Trump suggested he is open to new ways to achieve peace.

Trump to Netanyahu: 'Both sides will have to make compromises'

"We absolutely support the two-state solution but we are thinking out of the box as well: which is what does it take to bring these two sides to the table; what do we need to have them agree on."

Haley's comments came after Trump said on Wednesday that he was open to ideas beyond a two-state solution, the longstanding bedrock of Washington and the international community's policy for a settlement between Israel and the Palestinians.

"I'm looking at two states and one state, and I like the one both parties like," Trump told a joint news conference with Israeli Prime Minister Benjamin Netanyahu. "I can live with either one."

Trump said that the United States would work toward peace but said he was leaving it up to the parties themselves ultimately to decide on the terms of any agreement. He said such a deal would require compromises from both Israelis and Palestinians.

Trump's announcement appeared to loosen the main tenet of US Middle Eastern policy dating back three administrations and stunned the international community, which has crafted it diplomacy based on the premise of a Palestinian state co-existing alongside Israel.

Haley also echoed Trump in her remarks Thursday, stressing that a peace deal was not for Washington to impose but could only come from the parties themselves.

@nikkihaley
You're doing a great job, Nikki! So proud of you!

"The solution to what will bring peace in the Middle East is going to come from the Israelis and the Palestinian Authority," Haley said. "The United States is just there to support the process."

Haley, a Republican who previously served as South Carolina governor, also criticized the United Nations and the Security Council on Thursday for what she called a bias against Israel.

Haley said the United States would not support any UN resolutions like the one approved by the Security Council in December calling for an end to Israeli settlement building, that passed only after the administration of former President Barack Obama chose not to wield its veto.

Analysis: The revised US position on Palestine-Israel is likely to create political chaos

French and British diplomats also repeated their longstanding support of the policy, in a show of how Trump's remarks on Wednesday had caused confusion.

"The UK continues to believe that the best solution for peace in the Middle East is the two-state solution," said British ambassador to the United Nations, Matthew Rycroft.

On Wednesday, UN Secretary-General Antonio Guterres had warned during a visit to Cairo that was no viable way to end the Israeli-Palestinian conflict other than the establishment of a Palestinian state co-existing alongside Israel.