Arab and Palestinian NGOs have demanded that the United Nations should review its decision to withdraw a report prepared by organisation's Economic and Social Commission for Western Asia (ESCWA), which accused Israel of "apartheid". 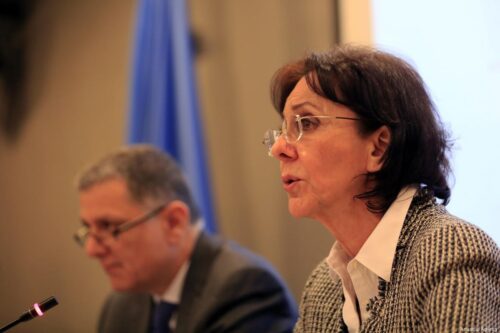 The NGOs sent a letter to UN Secretary-General António Guterres via the Office of the UN Special Coordinator for Gaza, at the end of a solidarity sit-in with ESCWA chief Rima Khalaf, who felt obliged to resign from her post following Guterres's decision to withdraw the report. The groups called on Guterres "not to bow to US and Israeli pressure" and to reject Khalaf's resignation. They praised her position in which she exposed the truth about what is happening in the occupied Palestinian territories.

The groups added that the decision to withdraw the report would lead to the non-enforcement of the principles of international law and international humanitarian law. "The report's withdrawal is incompatible with the principles on which the United Nations was created to lift injustice from the oppressed," one human rights activist told Quds Press.

On Wednesday, Khalaf reviewed a report prepared by her committee on Israel's practices towards the Palestinian people and the issue of apartheid. The UN document concluded that Israel had established an apartheid regime against the entire Palestinian people, particularly with a range of laws which "legalise" the seizure of Palestinian land.