Normalisation in exchange for a mirage

Regardless of what he says in his speeches and during his meetings with the Arab and Muslim rulers, who travelled to Riyadh from all over the world to meet him, one can say that American President Donald Trump will mainly focus on capitalizing on this turnout to make it a turning point in terms of legitimising the integration of Israel, as well as the Arab countries, into a new regional system constituting a new alliance. The alliance's main task will be to confront Iran and the Sunni Islamist political and military movements. According to Trump's logic, the formation of this system and allowing it to operate publically requires, first and foremost, the normalisation of relations between the Arab states and Israel.

It is clear that Trump is trying to provide reasons for the Arab governments to use to justify their acceptance of normalisation with Israel by claiming that this will be the first step towards achieving "the deal of the century" resolving the conflict between the Palestinians and Israelis. This means that Trump wants the Arabs to make a down payment before completing the "deal". 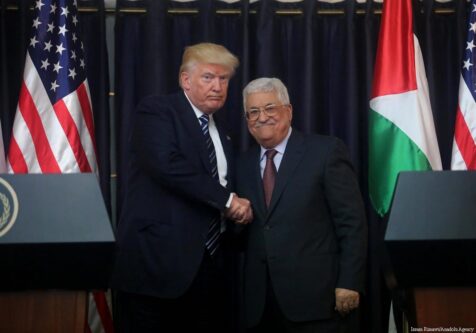 Unfortunately, there is evidence that Trump's mission will be easy, even easier than predicted by the most optimistic in Washington and Tel Aviv. According to America's Wall Street Journal last week, confirmed by an Israeli newspaper, the Arab leaders backed down from parts of the Arab Initiative to settle the conflict with Israel. According to these leaks, the Arabs relinquished the conditions laid by the initiative regarding normalisation with Israel. Hence, Israel is no longer required to withdraw from the occupied territories and agree to the establishment of a Palestinian state in exchange for normalisation. It is now enough for Israel to freeze construction in the remote settlements located outside of the large settlement blocs in the West Bank. Moreover, if the reported leaks are accurate, then this means that the Arabs are not only giving Israel the right to continue expanding large settlement blocs, which absorb over 80 per cent of settlers, but are also rewarding them in the form of free normalisation.

This move by the Arab countries is a blow to international systems and governments that regularly condemn construction in major settlement blocs, including the EU. There is no doubt that this position will be a harsh blow to some Israeli political forces and intellectual elites who confront the extremist right-wing government led by Benjamin Netanyahu and accuse it of threatening Israel's interests by continuing to expand settlements. At the same time, this development reinforces the Israeli right-wing discourse and will prolong Netanyahu's rule indefinitely, as he will be able to convince Israeli voters that the extremist approach adopted by his government will bear fruit without Israel being required to make any real concessions.

As for the down payments the Palestinians have to pay over the course of the "deal of the century", they seem impractical and endless. Although Trump publically admitted that the information given to him from his team regarding how far the PA has gone in its security cooperation with Israel was unbelievable to him, he is still demanding that the PA dry up the atmosphere of terrorism and deter Palestinians from joining resistance work. According to Israeli standards for the approach of "drying up of the terrorist environment" adopted by the Trump administration, the PA is required to stop incitement against Israel in curriculums, the media and in places of worship. According to the Zio-American logic, in order to deter the Palestinians from joining resistance work, the PA must cut off allowances given to the families of martyrs, prisoners and the injured.

Given his inferior view of the Arabs and Palestinians, Trump and his team have shown no sensitivity towards the calls made a few days ago by MK Bezalel Smotrich to expel the Palestinians from their land by killing their women and children, in accordance with a ruling issued by Rabbi Moses Ben Maimon who lived in the 12th century. 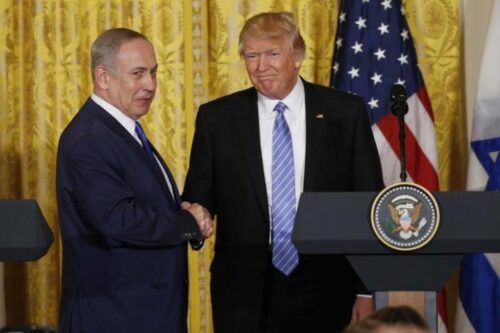 If this is what the Arabs and Palestinians will pay even before completing the deal, what will the Israelis pay when it is completed? The answer to this question given by the new American ambassador to Tel Aviv, David Friedman, one of

Trump's closest confidants, suggests that the Arabs and Palestinians will receive a mirage in exchange for their advance payments. The answer revealed by Freidman should sound the alarms in the corridors of the Arab decision-makers, as Trump stressed that he has no plan or vision for the "deal of the century" which he has talked so much about. However, he is committed to not pressuring Israel to accept any position (Israel Hayom, 12 May).

Even more troubling regarding the final "deal of the century" is that Friedman stated that Israel "will not be required to make any concessions" in order to achieve the deal.

However, if we ignored all of the above, it is sad and bitter that the Arab leaders, who are putting all bets on Trump, have paid little attention to the consequences of the scandals they are involved in, which may lead to an early end to their political lives. However, this will not occur before Israel enjoys the revenues of the down payments made by the Arab regimes and Mahmoud Abbas' PA in hopes of a deal that will not be.

Any free Arab concessions made to the right-wing government in Tel Aviv, which will also go to Trump, will be counterproductive, and will only contribute to strengthening Iran's regional standing, and will supply its propaganda machine with lots of fuel.