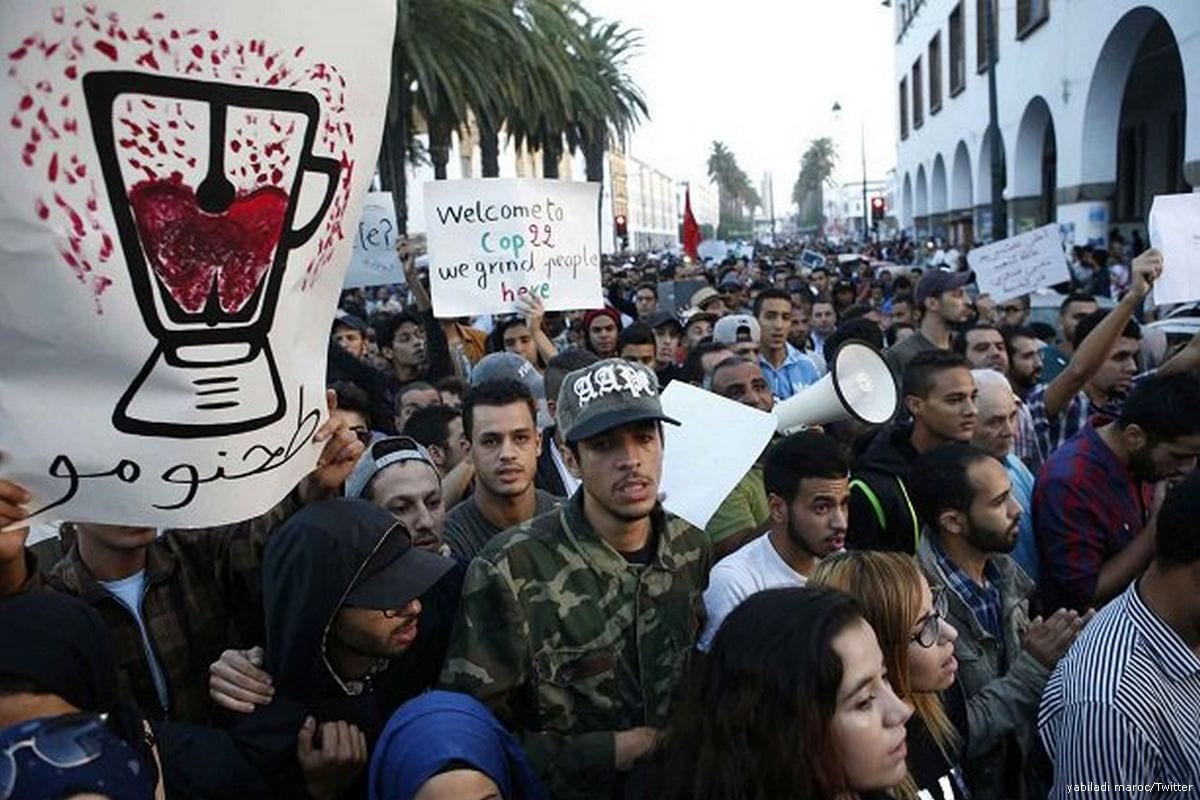 Moroccans protest after fishermen Mohcine Fikri was crushed to death in Al-Hoceima, Morocco on 8 December 2016 [yabiladi maroc/Twitter]
May 27, 2017 at 3:24 pm

Clashes erupted in a northern Moroccan city after authorities sought to arrest a well-known activist who has led recent demonstrations and who interrupted a Friday prayer sermon, activists and local residents said.

Political protests are rare in Morocco, but tensions in Al-Hoceima city have been simmering since October after the death of a fishmonger who was crushed inside a garbage truck while trying to retrieve fish confiscated by the police.

His death sparked outrage against "Hogra", a colloquial Derja Arabic term for deprivation of dignity because of official abuses or corruption, and prompted some of the largest protests since Arab Spring-inspired demonstrations in 2011.

Al-Hoceima and other towns in Rif region have a long history of dissent against the "Makhzen", the royal establishment in the North African kingdom where the king still holds ultimate authority despite ceding some powers to ease tensions in 2011.

According to activists present yesterday, a preacher in a local mosque criticised the so-called "Hirak" protests as "inciting unrest." In response, Nasser Zefzafi, leader of the "Hirak" movement, interrupted the sermon in the mosque.

"These are mosques of God, not of the Makhzen," Zefzafi said to chants of support among prayer-goers in a video widely circulated on social media.

Activists and local residents said people took to the streets around Zefzafi's home in the city, and clashes broke out between police and his supporters. They said there was a heavy security presence in the area that the activists said was an attempt to arrest him.

State news agency MAP confirmed an arrest warrant was issued for Zefzafi and an investigation had been opened into him and those with him during the mosque incident.

The Interior Ministry did not respond to a request for details on the incident. But the Ministry of Islamic Affairs, charged with overseeing Friday prayer sermons, denounced Zefzafi's actions as an "enormous disorder."

"The law stipulates sanctions against those who hinder religious rites," the statement read. "This incident constitutes vile behaviour."

The penal code punishes those who hinder religious ceremonies with a prison term ranging from six months to three years, and with fines.

"These sort of actions merit arrest, but I do not know whether or not authorities have arrested him," one government official told Reuters.

Zefzafi appeared on social media later where he released a video from an undisclosed location, assuring supporters he was free and urging them to remain peaceful.

"I asked the police why they're doing this," one activist told Reuters. "They told me there's a warrant out for Zefzafi's arrest."

One eyewitness said people were out on the street and security forces responded forcefully, and there was a heavy presence near Zefzafi's home.

Moroccan authorities usually police protests heavily, nervous about unrest since the 2011 demonstrations. During those protests, the king devolved some of his authority to an elected government in a constitutional reform.

Thousands of Moroccans marched under the watch of police in Al-Hoceima last week, waving banners proclaiming "Are you a government or a gang?"