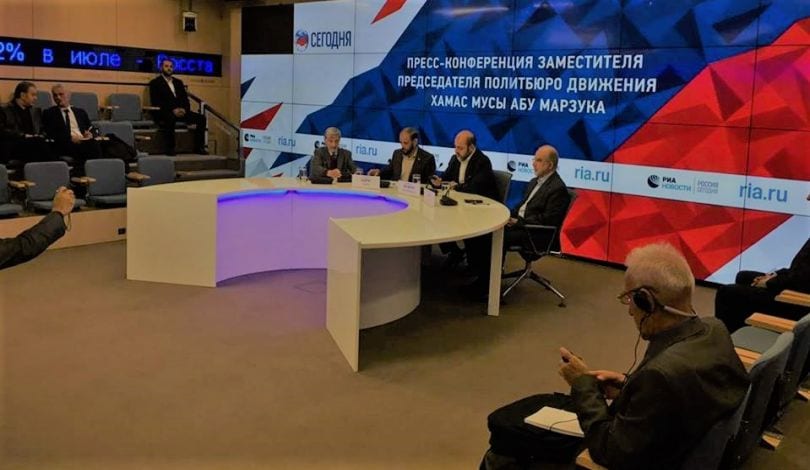 On Tuesday, a delegation from Hamas concluded a visit to the Russian capital, Moscow, which it described as "fruitful" in a statement issued on Thursday.

Hamas stated that the movement's delegation, headed by deputy head of the political bureau, Mousa Abu Marzook, met with Mikhail Bogdanov, Putin's envoy to the Middle East and Africa, the Russian deputy foreign minister, and other foreign ministry officials.

During the three-hour meeting, Hamas' delegation reviewed the developments of the Palestinian reconciliation and the latest developments in Cairo's meetings, including the decision to dissolve the administrative committee and invite al-Wefaq (consensus) government to come to Gaza Strip and approve to hold the general elections, according to the statement.

The statement pointed out that Bogdanov praised Hamas's "important" step and stressed Russia's appreciation for it, expressing his hopes to achieve Palestinian reconciliation and end the internal dispute.

Hamas stated that the Russian official expressed his country's readiness to receive and hold the consultations of the Palestinian factions and offer all the conditions necessary in order to achieve this.

Read More: Where did Hamas go wrong in Cairo?

The movement explained that its delegation presented a "full explanation" of the harassment which the citizens of the West Bank are being subjected to by the Israeli occupation, especially the settlements and the spread of barriers and arrests.

According to the statement, Hamas delegation reviewed the occupation's "tireless" efforts to judaize the city of Jerusalem, its actions against al-Aqsa Mosque and Christian sanctities, the demolition of Jerusalemites and changing the city's landmarks and population composition.

The delegation explained the situation of the Palestinian prisoners, the inhuman siege on Gaza Strip and the disastrous effects of the latest measures against Gaza at different levels.

Hamas' statement noted that the two sides (Hamas and Russian officials) had exchanged views about various regional and international issues and the Russian role in all those situations.

It is noteworthy that the communication between Hamas movement and the Russian leadership "has not stopped" over the past years, "but it has witnessed some apathy" as a result of the two parties different attitudes concerning Hamas' perception of the Syrian crisis.