Jerusalem is lost only in the eyes of the insolent 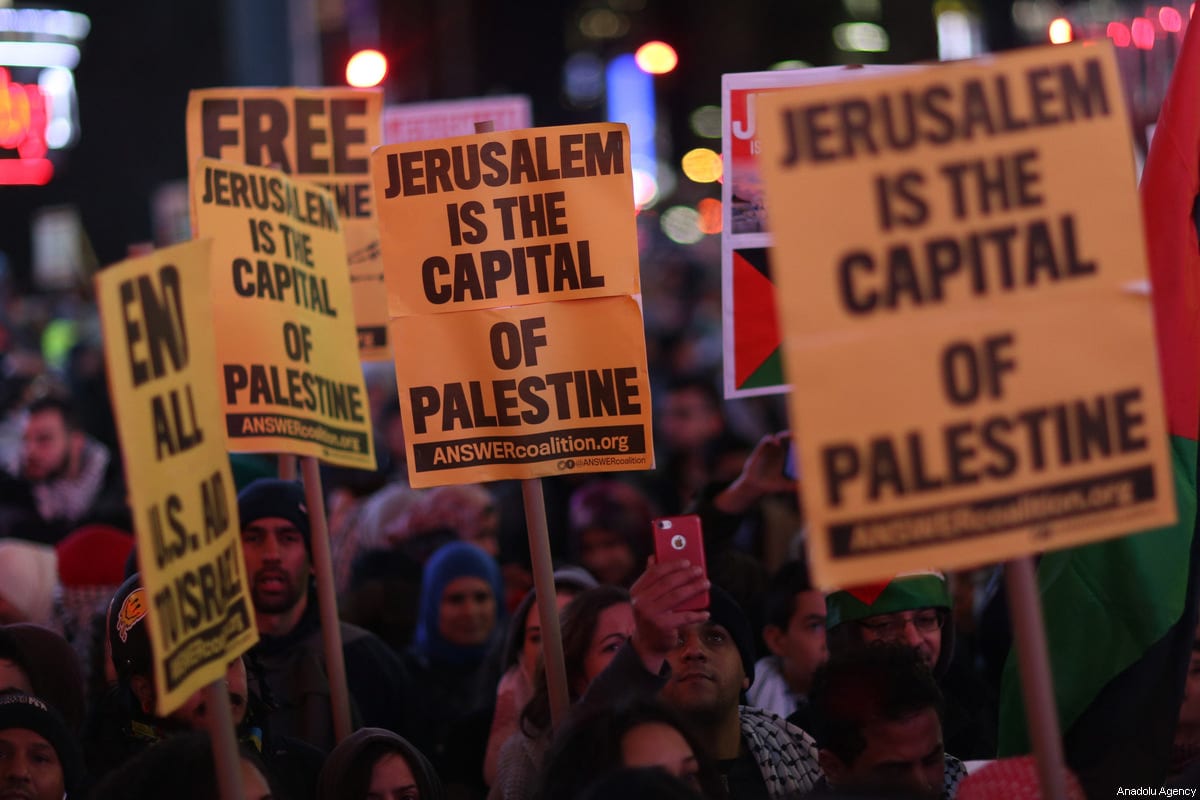 People attend a demonstration against US President Donald Trump's recognition of Jerusalem as Israel's capital, at the Times Square in New York City, US on 9 December 2017 [Mohammed Elshamy / Anadolu Agency]

The Muslim Brotherhood Supreme Guide in Egypt, Dr Mohamed Badie, said in court, "Palestine is our primary cause. Release us and we will liberate Jerusalem and Palestine." The judge's reply to him, "Jerusalem is lost and you are terrorists," expressed the government he represents. This exchange shows how Egypt's government is not concerned with Jerusalem, Palestine or the history of these places. It shouldn't be surprising that neither the land nor and its holiness of Palestine mean anything to this government. It has already demonstrated that it will concede its own, Egyptian land –the Sanafir and Tiran islands – to Saudi Arabia, So how can we expect this government to understand what Dr Badie meant.

Israel, of course, is aware of the Arab public and fears them, but they are reassured by the Arab governments and which guard Israel's borders. Who would believe that Egypt, the land of Al-Azhar, would arrest journalists who stood in front of the union and chanted in support for the Palestinian people Jerusalem? Who would have believed that Egypt banned all protests in the streets, allowing them only to take place within the gates of Al-Azhar and university campuses? These metal gates formed a barrier between the angry masses and the streets; gates the government thought would contain and control their anger.

Trump had requested that Arab rulers contain the anger of the masses after his decision to declare Jerusalem capital of Israel. Some of them listened to him and did so, and others ignored him and did the opposite – such as the Jordanian, Moroccan, Algerian, Tunisian, and Mauritanian regimes. Their people held huge protests that filled their streets. In addition to this, other Muslim countries participated, such as Turkey, Indonesia, Malaysia, and Pakistan, whose people took to the streets like crashing waves.

The question remains: can protests alone liberate Jerusalem? It is true that these protests expressed the anger of the Muslim public and their rejection of the reckless American decision, and they are important and necessary. However, these protests did not occur daily nor in a manner that would worry Israel. Rather, they quickly faded in all the countries and were limited only to the occupied Palestinian territories.

This is exactly what the occupation wanted; a temporary popular uprising that would blow off some steam and then everyone would go back to their own concerns and retreat back into their shells. Meanwhile, the Israelis would corner the Palestinian people, killing and arresting them as they please. This would strip Jerusalem of its Muslim and Arab nature, making it a purely Palestinian concern.

We are currently witnessing this in the uprising in the Palestinian capital and heroism of the courageous Palestinian people. Perhaps the most prominent of these acts of heroism is the martyrdom of Ibrahim Abu Thuraya, killed by the Israeli bullets as he raised the Palestinian flag and chanted for Jerusalem. He was a wheelchair-bound double amputee whose legs were amputated in the past because of another confrontation with the Israeli occupation forces. However, this did not stop him from continuing his struggle and fight against the enemy, even if he only had his tongue to fight back with. His courage made us all feel weak, while he remained strong.

However, this uprising is suffering the same fate as the protests, as there is no united leadership or party that is guiding or organizing its activities and channeling them in support of Jerusalem. This of course reminds us of the first intifada, which broke out on 7 December 1987, around the same time this intifada is occurring. However, the situation and people are different and the intifada was able to deal harsh blows to Israel because there was a leader that people agreed with or opposed named Yasser Arafat.

The people rallied behind him and he was able to move the public, not only the Palestinian public, but the Arab public as well. However, the current Oslo leadership, which resulted from that intifada which forced Israel to quickly reach a fake peace treaty with the Palestinians, provided Israel with things it could only dream of! It is enough that this authority recognised Israel, abandoned the concept of resistance and replaced with the option of peace as a strategic option. However, this achieved nothing over the past 25 years other than the loss of more Palestinian land, the Judaisation of historical Palestine, and the construction of more settlements on Palestinian land.

Those who have been given fake positions in this fake authority, that governs nothing, were happy with their seats. This authority's leadership only managed to make a revolutionary speech as the Muslim summit, but did not dare cancel the Oslo Accords, which is the cause of all the of the catastrophes suffered by the Palestinian people. On one hand, this authority enjoys the bright lights, car convoys, red carpets, and the receptions they receive during visits to foreign countries, but on the other hand, the ghost of Yasser Arafat's demise haunts them. 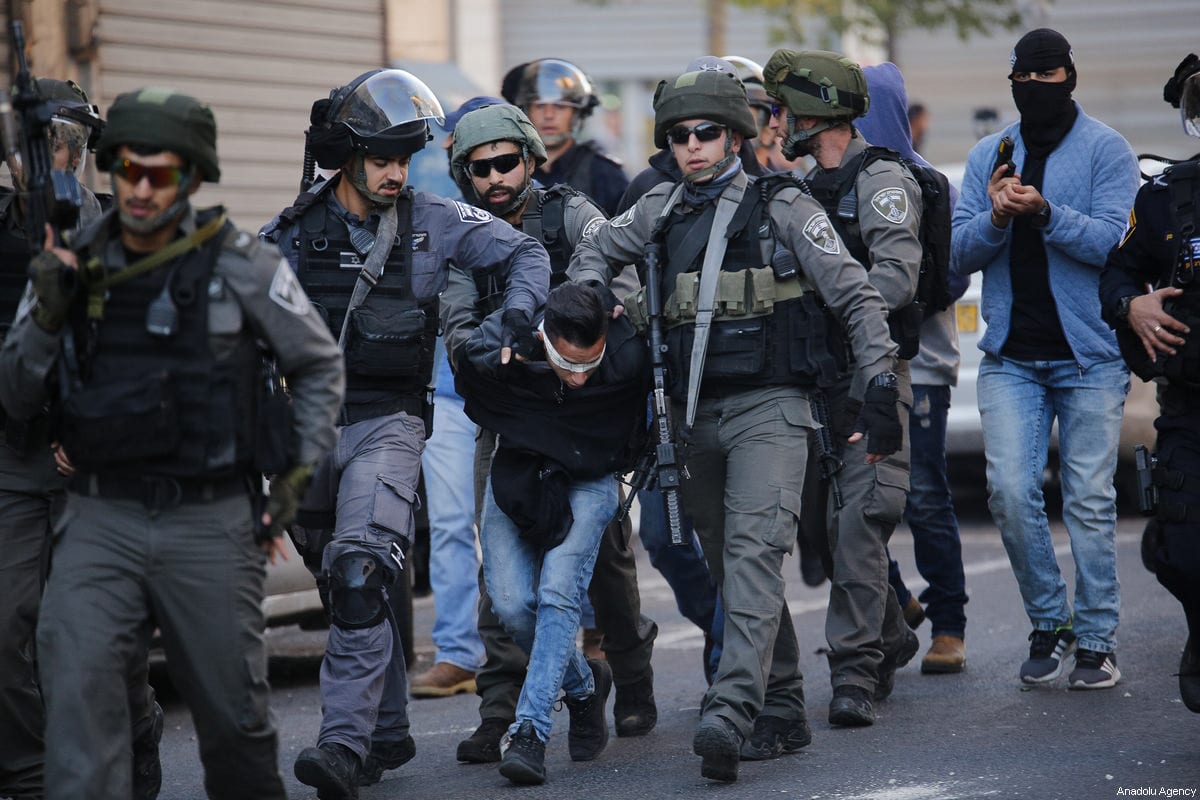 After having realised the trap he fell into and pulled the Palestinians into, Arafat wanted to fix the situation, but he was confined for two years and then his assassination. Abbas is afraid of suffering the same fate as Arafat. However, ever since he was in Tunisia, Abbas has not believed in resistance to liberate Palestine

However, we must give credit when credit is due. We must praise his refusal of Al-Sisi's request to attend the Muslim summit in Istanbul, as he and the Saudi Crown Prince tried to sabotage the summit with their countries' megre representation. Meanwhile, Bin Salman tried to pressure the Jordanian King Abdullah II not to attend. However, Jerusalem is an existential issue and therefore their attempts failed.

Despite all the hopes for the Istanbul summit and the sincere intentions of President Recep Tayyip Erdogan, who truly expresses the conscience of the nation, the summit did not result in decisive decisions that are appropriate for the situation and which please the Muslim public. This is especially since about 20 countries with relations with Israel attended the summit, but the closing statement did not even hint at the possibility of severing ties with Israel or summoning the Israeli ambassador for talks.

Read More: Double amputee shot dead by Israel was an inspiration in Gaza

The public was further frustrated by the fact that the summit emphasises the division of Jerusalem into East Jerusalem, making it the capital of Palestine, and West Jerusalem as associated with Israel. However, the Muslim masses consider Jerusalem to be a united city that cannot be divided. In short, the summit did not have any power cards to play or means of pressure or strength that would force the US to back down from its decision, and therefore, its decisions were weak and shocking.

While the Palestinian people have no true leadership that could have used Trump's decision as motivation to cancel the Oslo Accords and a chance to escape its unfair and shameful obligations, the Hamas leadership should not waste the opportunity to rid itself from the burden imposed on it by the ill-fated reconciliation with Fatah. It must not surrender to the pressure put on it from regional forces. In the eyes of the Muslim masses, Hamas is the only resistance left.