Abadi vows to protect Kurdish protesters against their autonomous rulers 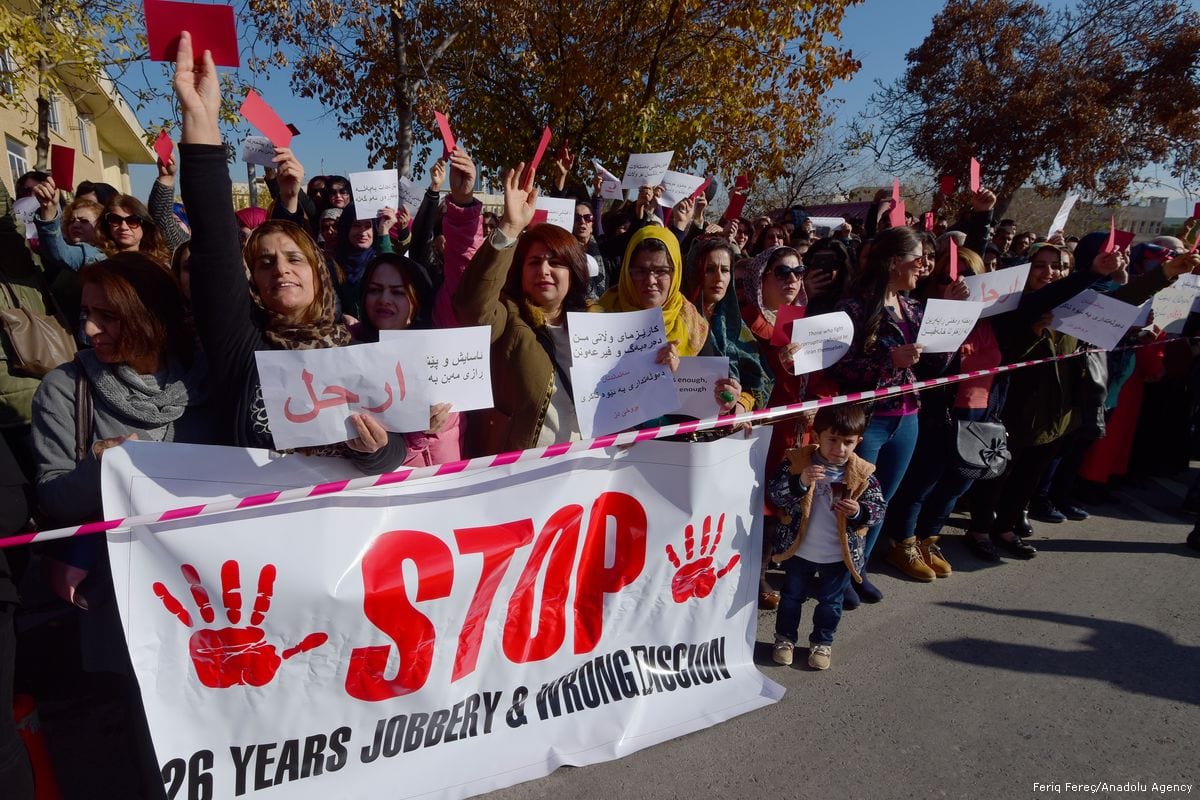 Thousands of public servants hold banners and shout slogans during a demonstration to protest corruption at public enterprises, in Sulaymaniyah, Iraq on 18 December 2017 [Feriq Fereç/Anadolu Agency]

For the fourth consecutive day, unrest has gripped Erbil, the largest city in Iraq's semi-autonomous north. In Sulaymaniyah, protesters have been on the streets for six days, marching defiantly against their political leaders for dishonouring their promises.

Disgruntled civil servants, teachers and students have voiced dissent — not for the first time — at having to bear the brunt of the consequences of political graft and incompetence in the Kurdish Region of Iraq (KRI). The failure of public services as well as unpaid salaries in the public sector have seen rage transformed into violence, which has been condemned by the party at the heart of it all, Iraq's Kurdish Democratic Party (KDP).

Clashes in Raniya, north-west of Sulaymaniyah, between protesters wielding AK-47 assault rifles and Kurdish security forces grew especially violent. Government offices belonging to the KDP, the Kurdistan Islamic Union and the Gorran Movement were attacked, with some being set alight. "What do protesters hope to gain?" has been a question parroted by politically-opposed sides.

While the demands of those whose salaries have dried up were welcomed as long as their protests remained peaceful, KDP officials condemned what they regarded as "uncivil" behaviour. The unrestrained use of violence by some, which resulted in five people being killed, according to Kurdish Rudaw TV, drew wide criticism from local activists for burning the communal bridges built over the past 14 years. Regional medical authorities reported that security forces shot at the crowds with rubber bullets and tear gas. "Kurdish ruling parties claim a 'foreign hand' to be behind protests [but] they have constantly failed to recognise their failure in governance," tweeted former Rudaw correspondent Yerevan Saeed.

Exploiting these political fissures is the Baghdad government of Haider Al-Abadi. The Iraqi Prime Minister emphasised the right of peaceful protest, despite that fact that similar upheaval prior to him taking office was called "unconstitutional' in the time of his predecessor Nouri Al-Maliki. Iraq's own "Arab Spring" back in 2012/3 was repressed mercilessly without any defence of behaviour that ought to be protected by the constitution.

Vowing not to stand by idly, Abadi presented himself as the national saviour of Iraq's Kurds, promising deliverance from oppression. The crackdown which the KDP has escalated over the past 24 hours was pre-empted by the government in Baghdad, whose approach is seeing (former Kurdish leader Massoud) Barzani-aligned political factions feeding directly out of its hands. A scapegoat will be needed after all to explain the orchestration or manipulation of chaos.

As an important ally of Britain, Theresa May's government called on the KRI to remain "united, in government, parliament and on the street" while simultaneously condemning press censorship. Yet these seemingly organic developments are more engineered than they first appear. 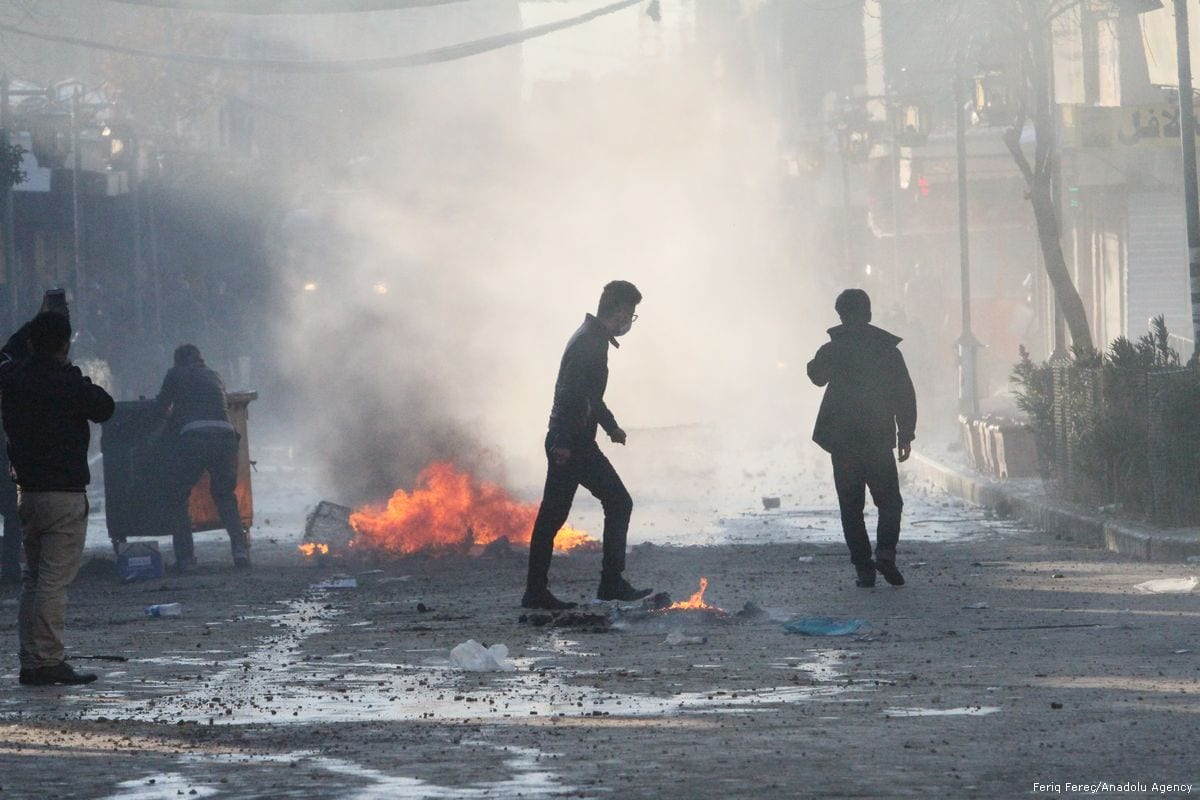 Demonstrators burn tires and block roads as they clash with riot police during protests in Sulaymaniyah, Iraq on 18 December 2017 [Feriq Fereç/Anadolu Agency]

Though last week's disruption opened another chapter of civil strife, it can also be read as a spasm of protest triggered by salary cuts set in motion by Baghdad's backlash against the KDP's decision to host a referendum on Kurdish independence. Baghdad's takeover of Kirkuk following the party's defiance and violation of Iraq's constitution reversed nearly every gain that America's occupation had granted the Kurds.

The takeover which Iranian Revolutionary Guard commanders had helped to mastermind left Iraq's northern borders vulnerable to greater infiltration by the same forces as oil fields held by the Kurds for over a decade exchanged hands once more.

This week's mass protests are one of several open doors through which Iran has crept. Iranian influence, many believe, is being channelled by way of Kurdistan's Gorran Movement. The movement's political debut in 2009 shook the domestic scene. Alongside calling for a "nationwide" protest yesterday to weaken the KDP's position, the final nail in the coffin was the party's withdrawal from parliament alongside the Islamic Komal Party.

Gorran's withdrawal strategy combined with calls for free and fair elections to form a new government will pile on the pressure in areas that could tip the balance of power in their favour with, of course, support from Tehran. The group's former ministers have long called for the KDP's powers which cost them their cabinet posts back in late 2015. That's when they demanded the powers of the then Prime Minister Barzani to be curtailed.

As the KDP struggles to get itself out of this mess, a new saviour, Abadi, has emerged, making the protection of Kurdish civilians his mandate, even though he has approved the moves to strangle economic activity in Iraq's semi-autonomous north. The noose has been tightened, but can the KDP survive? That's the big question.