Students march against Prevent at the University of Westminster

Yesterday, thirty students from a group called Westminster Students Not Suspects marched from the University of Westminster's Marylebone Campus to the Regent Street Campus, in protest at the way that the government's Prevent anti-terrorism strategy is being implemented at their university. They occupied the Regent Street building's lobby, and refused to leave until their demands were met.

The students claimed that the university only installed CCTV cameras in campus prayer rooms, shredded copies of the Qur'an, postponed almost every event organised by the Palestinian or Islamic societies (sometimes as late as the day before the event was scheduled to take place), and had stricter security checks for events arranged by these societies.

In 2015, British universities became legally obligated to implement the Prevent duty. Places like the University of Westminster must show that they are actively trying to stop students from being radicalised. However, the protesters at the march argued that the University of Westminster has been especially discriminatory in using the Prevent duty to target students according to race, religion and political orientation.

While the method of implementing Prevent at the University of Westminster may be more severe than most, students and activists have been speaking out against the strategy for years. Since 2015, for example, the National Union of Students campaign "Students not Suspects" has been arguing that Prevent takes away students' freedom of speech and targets minority students disproportionately.

Nevertheless, the organisers of yesterday's march argue that it was unique, because it was the first protest against the way that the strategy has been implemented at a particular university. According to some accounts, this was actually the first protest of any kind at the University of Westminster for almost a decade.

Read: Why students at SOAS and the University of Westminster are organising against Prevent 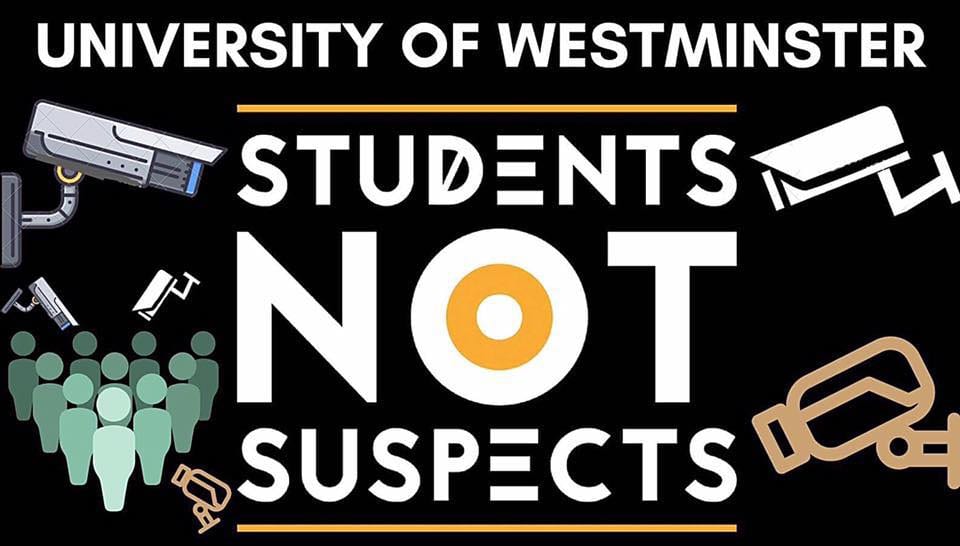 The Week of Action

The students called for three days of action. The week started with a crisis meeting hosted at SOAS, University of London. The meeting was meant to educate students on the ways that Prevent was being used to silence student activists from various London universities, and prepare students for the march at the end of the week.

Students then marched to five of the University of Westminster's campuses: Marylebone; the Cavendish and the Cavendish 101 Campuses; the Little Titchfield Street Campus; and the Regent Street Campus. The group also stopped for a short time in front of the BBC's Broadcasting House.

Students held two large banners with "Students Against Prevent" written on one, and "Justice for Palestine is Not a Crime" on the other. Other slogans included, "Who told you this was okay?", "Why are we still fighting for freedom of speech?" and "This is only the beginning".

At each campus, the students gave a copy of their seven demands to a member of the university's staff. These included that the university should uphold its obligation to protect freedom of speech; re-write its risk assessment forms; stop discrimination against societies based on their political opinion, religion or ethnicity; and withdraw the external speaker policy.

The march ended with an occupation of the Regents Street Campus lobby. The group of students sat in a row in front of the entry turnstiles and refused to leave until either their demands were met or the Vice Chancellor agreed to speak to them.

The meeting between students and university representatives

Shortly after the occupation started, representatives from the Student Union, Roland Dannreuther (Deputy Vice-Chancellor) and Kate Hayes (Director of Communications, Recruitment and External Affairs) agreed to meet the protesters in an adjacent café to talk about their demands and concerns. A time limit of 30 minutes was set.

Although Dannreuther had said that he wasn't sure why they were shredded but he knew that the Qur'ans were destroyed in a way that was "Sharia compliant", during the meeting Hayes argued that they were destroyed because the room was going to be cleaned and the books were left by the previous year's students. A Student Union representative added that the Qur'ans were destroyed because the prayer rooms were converted into multi-faith rooms, and they wanted to remove any religious iconography from them.

Another issue discussed was that the university had stricter criteria for the Palestinian and Islamic societies' events than those of other societies. For example, the official risk assessment flagged Janna Jihad, an eleven-year-old from Palestine, as a security risk, but said nothing about Katie Hopkins, who is famous for making racist comments, such as calling refugees "cockroaches" and calling for a "final solution" for Muslims.

A Student Union representative argued that the reason that the criteria was so strict for the Palestinian and Islamic societies was because the union had to examine events through a security lens and to determine if the event would harm the university's reputation. The rep added that because Mohammed Emwazi — the infamous "Jihadi John" — was once a student at the University of Westminster, the institution is under a lot of media scrutiny. As a result, the Students Union determines the risk of an event based on how the events might be interpreted by non-students, and if they are dangerous or have the potential to radicalise those who take part.

By the end of the meeting, none of the demands were met. However, the Student Union and the representatives agreed to meet again on Tuesday, 10 April.

"Today, students have stood united and defiant for the first time in ten years," commented Farah Koutteineh. "They did this to say that the university will not shred another Qur'an, that it will not censor our freedom of speech, and that we want freedom of speech and democracy at the University of Westminster. We will accept nothing less than for all seven of our demands to be met."