Women migrant workers come together against the kafala system in Lebanon 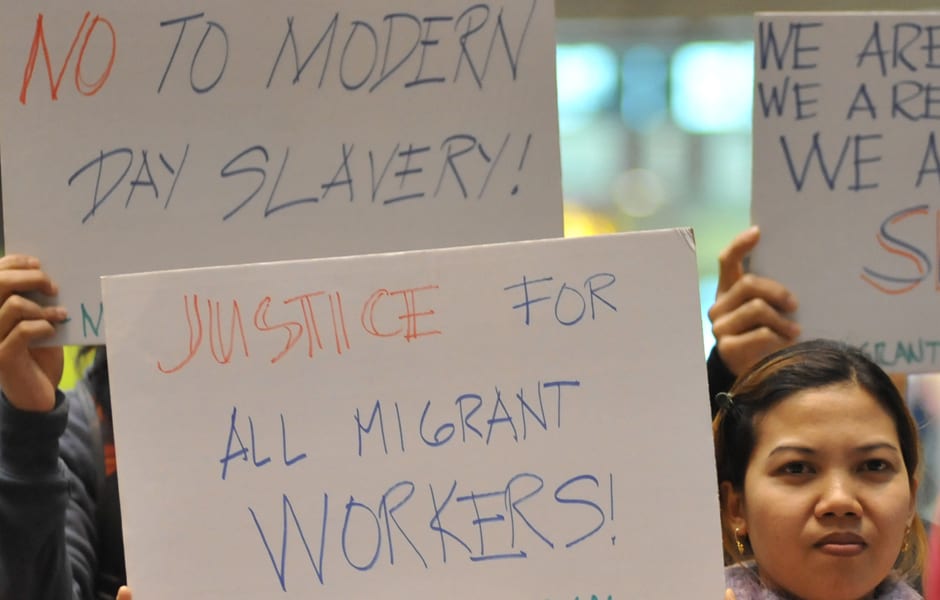 Foreign migrant workers hold placards during a demonstration in the Central lobby of Taipei Train Station on 9 February, 2014
Roshan De Stone and David L Suber
May 8, 2018 at 10:12 am

Roshan De Stone is a human rights advocate working in Syrian refugee camps in Lebanon. As a freelance journalist, she has published with Al Araby, Al Jadaliyya and SalonSyria and is a full-time contributor to Brush&Bow.

David L. Suber is a political researcher and journalist. He is directing a documentary on deportations from Europe and currently lives in Lebanon, where he works in refugee camps. David too is a full-time contributor to Brush&Bow

Lebanon has a huge workforce of over 250,000 women brought in from other countries who are employed as domestic workers. Largely invisible, most domestic migrant workers are predominantly young women from Asia and Africa.

As Lebanon's ageing population increases, and more Lebanese women enter the workforce, the country has witnessed a growing need for homecare for middle and upper-middle class families. Until a few years ago, girls and women from low-income families in the region used to be recruited for such work; today's trend, though, is for Lebanese families to be increasingly reliant on a foreign workforce.

Migrant workers are recruited through a system of sponsorship known as kafala, which ties a migrant's visa and work permit to their employer's approval. Such a structure excludes migrant workers from national labour laws, a condition which makes them extremely vulnerable to exploitation and abuse.

In spite of their vulnerable position, a group of women have come together to fight for better working conditions. The group is called the Alliance of Migrant Domestic Workers in Lebanon. The Alliance is led by a collective of female activists from different countries, each of them representing their national community of workers. The leaders of this group dedicate their one day off every week to supporting others like them or in even worse situations.

There is certainly a need for their support. With a death rate of two domestic migrant workers a week as a result of suicide, murder and botched escapes, the abuse of such workers in Lebanon is endemic. Physical and sexual assault are commonplace and are often used as oppressive forms of discipline to make migrant workers subservient.

"Because of the kafala system we are under the sole control of our employer," explained Sonia, a domestic worker from Sri Lanka. "We cannot change jobs or leave the country. If we anger our employers, they can cancel our residence visa and report us to the General Security for arrest and deportation."

Serena is one of the longstanding campaigners for migrant workers. She insists that the kafala system has established a situation of systemic violence against migrant women. "Some of these girls go straight from the airport to the homes and do not leave for years before being returned straight back to the airport once their contract is over… alive if they are lucky." These abusive practices are often recommended by recruitment agencies and are generally considered to be common practice.

The role of recruitment agencies is often underestimated when looking at the situation of migrant domestic workers in Lebanon. They have flourished as leading actors in the international migration industry, advising employers on how to choose a maid according to their budget, needs and preferences. A 2016 International Labour Organisation (ILO) study shows that most employers in Lebanon rely on agencies to find a maid. As a result, it is assumed that very few employers in Lebanon actively seek to inform themselves about the rights of domestic workers, relying on agencies to regulate their relationship with the employees, especially in case of a dispute.

Informed by stories of abuse perpetrated by such agencies, we held an undercover meeting with a recruitment agency in Tripoli. Posing as UN workers, we were given a quotation for a recruitment cost of $2,000 that would allegedly cover travel, registration, medical checks and insurance. Costs appeared to vary depending on the country of origin of the domestic worker. As Ethiopia and the Philippines have instituted a ban against their nationals travelling to Lebanon for work, we were told the travel fee would be higher for maids of these nationalities. Higher travelling costs are reportedly linked to the higher costs involved in trafficking workers through third countries in the Gulf.

Our meeting with the agency confirmed the extremely low wages that the workers themselves had told us about, standing at between $150 and $200 a month. Contracts are written in Arabic and copies are rarely provided to the worker. During our meeting, we were advised to withhold the worker's passports and were recommended to give no holidays for the first year of work, so as to test the "reliability" of the worker not to get "distracted" from their work. We were also told that no telephones should be given to maids, and that if they were to fall ill, the agency would "remedy" the situation by sending the worker straight back home and replacing her with another worker. The stature, beauty, age and religion of the worker were routine requirements for the agency to ask a potential employer.

Recruitment agencies in Lebanon rely on middle men in the workers' countries of origin. "They try to pick young girls from the countryside," Selma told us. She's a Nigerian girl who was tricked into working in Lebanon when she was just 16. "They prefer uneducated girls because they know they won't be able to read and write and will find it harder to know their rights. Then they propose them a fake deal so that they agree to travel." She paused. "I was told I was going to be a receptionist. It was only when they brought me to the madam's house and they told me I would sleep on the balcony that I understood what was happening to me."

Hardened by such difficulties, the women of the Alliance are determined to take their struggle forward. It was founded in 2016 and is not recognised by the Lebanese government, as it is illegal for migrant workers to unionise. "It hurts when you are fighting for something and your voice is taken away from you," said Ulady, a representative of the group.

In the face of the deportation of two vocal activists in 2016, avoiding direct confrontation with the Lebanese authorities and opting for a non-aggressive mode of struggle has become a hallmark of the Alliance. "We understood that we needed better and safer ways of protesting and organising," Christina told us, "and solidarity can work better than confrontation in the long run." She has been a domestic worker in Lebanon since she was 17.

When the Alliance was first formed, things were not easy. "We had to start from zero," Ulady pointed out. "In our first Alliance meetings we would just come together. We had no strategy. Many of us would just come to have a place where we could cry and talk. We soon created a space for emotional support for one another. Being able to show our real emotions about our daily experiences of oppression was the strongest form of resistance we had." Weekly meetings were soon organised in Beirut, providing spaces where women could come together, share their experiences and form the strong group that we see today.

Elena, a Filipino worker who has been a domestic worker and activist for over 20 years, explained the aim of the Alliance: "We want to reach out to women working through abuse, who have been trafficked to Lebanon or tricked into years of slavery by agencies and abusive employers. We need to tell them that they are not alone. We are many, and we can learn from each other and become stronger and together speak out for our rights."

Recently, the Alliance started running theatre workshops. Such meetings are an occasion for workers to learn about their rights and legal condition in the country, as well as to receive tips on how to deal with abusive employers. Using theatre as a way of fostering participation and communication is functional to overcome the inevitable language barrier. The workshops focus on sharing daily experiences of abuse and how to deal with them.

"Enacting experience works better than using words, especially when your audience speaks languages from all continents," Sonia said. Pointing at her heart, she could not be more convincing. "Even if we don't all speak the same language, we understand each other in here."