Gaza, Haifa, and breaking the blockade on the Palestinians

Palestinian workers hold banners and shout slogans as they march toward United Nations Coordination Office (UNSCO) during a protest against Israeli blockade of Gaza, in Gaza City, Gaza on 27 December 2016 [Mustafa Hassona/Anadolu Agency]
Hayyan Jaber
June 6, 2018 at 9:52 am

All Palestinian communities inside and outside Palestine are living in a state of blockade, varying in its form and degree of severity, but the siege on the Gaza Strip is the ugliest, cruellest and most comprehensive. It is a siege imposed by the Israeli occupation, while the local situation contributes to its continuation and consolidation, as a result of the options of the Palestinian political leaders. These options range from the two-state option, the option to surrender, and the option of chasing behind authoritarian dreams. The regional countries also contribute in varying degrees to this siege, especially in terms of the refugees inside the ring countries, who are forced by the authoritarian and security regimes to abandon any genuine political and national role and to focus on securing their daily needs or engaging in political action directed by the regimes that serve their interests, in a manner similar to the situation of the Arab nations as a whole.

However, the recent Palestinian movement in both Gaza and Haifa has worked to break the siege especially in these two areas, as well as across Palestine as a whole. How can't it succeed when it is dealing a harsh blow to the occupation and all parties contributing to prolonging the siege? On one hand, the activity in Gaza expresses the failure of this policy. It is an example of the Gaza Strip's ability to turn its siege into a siege on the occupation, on a political, security, and legal level. In the past two months, the Gaza Strip has moved to decision-making positions and influencing events, while the occupation has been sustaining blows as a result of the success of the movement's organisers and activists in controlling this confrontation. They managed to control it in a manner that highlights the strength of the Palestinian right and perseverance, as well as highlight the brutality and criminality of the occupation. The movement succeeded in avoiding all of the occupation's provocations aiming to derail its peacefulness or turn it into an instantaneous reaction that would lose its continuity and effectiveness. This broke the political and security blockade by means of Gaza returning to play its role in the struggle, effectively, thus being more influential than it was in the pre-siege phase. In addition to this, it exposed Israel's lies and crimes against humanity and international law. The events in Gaza also succeeded in breaking the ice of the Palestinian popular division and redirected the struggle's compass back to its correct direction, both in terms of the unity of the Palestinian people, the unity of its struggle from Gaza to Haifa, Jerusalem, the West Bank, and the diaspora, and in terms of the goal and purpose for which we are fighting, i.e. regaining our stolen rights. 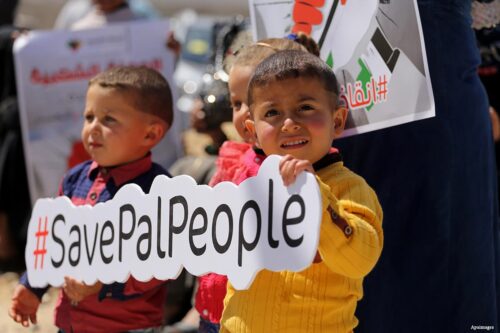 These are the same messages and meanings sent by the movement in Haifa today, in addition to its success in breaking the efforts of the occupation aimed at isolating the Arabs in the territories occupied in 1948 from the concerns of their people and their homeland on the one hand, and seeking to trap them by means of their racist and fascist laws, giving them only two options, i.e. either accepting the racist occupation authority that treats them like third, fourth, or even fifth class citizens, or imprisonment, exile, and withdrawal of citizenship, which ultimately means forcibly displacing them from their historical land and uprooting them from their environment and social setting.

Read: Palestine is not occupied, it is colonised

It is worth noting that Haifa's movement has succeeded in dealing a blow to the disappointing Palestinian leadership that has abandoned it as well as over 78 per cent of historic Palestine by adopting the two-state option that paved the way for the so-called peace agreement. This was decided under the pretext of accepting international law and respecting the special situation of Palestinians living in territories occupied in 1948. However, this leadership disregarded the fact that respecting the special situation of the Palestinians requires us to support their struggle in order for them to first and foremost continue their steadfastness inside the Palestinian territories occupied since 1948 and secondly, to expose the racism of the occupation and its crimes against them and all of the Palestinians. This will allow them to ensure their legal and human rights, their right to remain inside Palestine, and their right to resist and confront the occupation, as part of the overall Palestinian situation. Therefore, the special situation of these Palestinians becomes a collective responsibility that requires us to protect them and support them legally, politically and in the media, instead of besieging them and isolating them, thus turning them into small groups besieged by the occupation first and then by us.

Of course, the movement in Gaza and Haifa is not a historical precedent and the first of its kind, but rather an extension of the Palestinian struggle in the West Bank, Jerusalem and the diaspora. This struggle has confronted various types of conflict in order to overcome all of the local, regional, and international circumstances that undermine it. This includes dividing Jerusalem and the West Bank, both in terms of geography and security, in order to stop the Palestinians from succeeding in making their weekly demonstrations and pretexts into a mass saga similar to that in Gaza. It also includes the besiegement of most of the Palestinian refugee camps in surrounding countries and turning them into isolated security zones, lacking the elements of normal life and lacking political and legal rights, including the rights adopted by the Arab League and laws governing the host states themselves, in addition to international laws in general, whether those addressing human rights and or refugee rights.

However, despite the success of the Palestinian movement in all of the above, breaking all aspects of the siege, especially the deadly siege in Gaza, requires the protection and development of the popular movement by means of working on two separate and complementary axes. The first is based on protecting the movement and its continuity as much as possible, while working to develop it and develop its methods. It also requires expanding this movement inside and outside of Palestine by means of the Palestinians in the diaspora, and cooperation and communication amongst all of the international forces and communities that are active and supportive of the Palestinian rights. This will serve as a platform to expand the base of those supporting Palestine and their rights globally at a time when this is considered a factor of strength and protection of the movement within Palestine.

The second axis is based on the integration of Palestinian popular movements with the recently emerging politics, both emerging before and after the movement. The popular movement must eventually choose its organisational and political leadership, as well as its political programme or the programme of the Palestinian struggle. Furthermore, there is a need for political initiatives to seek to gain the confidence and legitimacy of the Palestinians in order to represent them and defend their rights and objectives, especially political initiatives that seek to correct the mistakes of the past and cutting temporary programmes and the two state solution, as well as the traditional Palestinian leaderships who are fully responsible for the deterioration of the Palestinian cause. This is due to their wrong choices and their pursuit of their own interests and the interests of their regional supporters.

Today, we need to address all of the inhumane living conditions suffered by several Palestinian communities and to confront all the mistakes of the Palestinian leadership, including the defeatist submissive ones and the opportunist irrational ones. This will establish and strengthen a long-term and clear popular struggle with firm goals and objectives that it will not concede or bargain. This will lead to the first defeat of the occupation and its supporters politically, on the ground, and perhaps structurally.