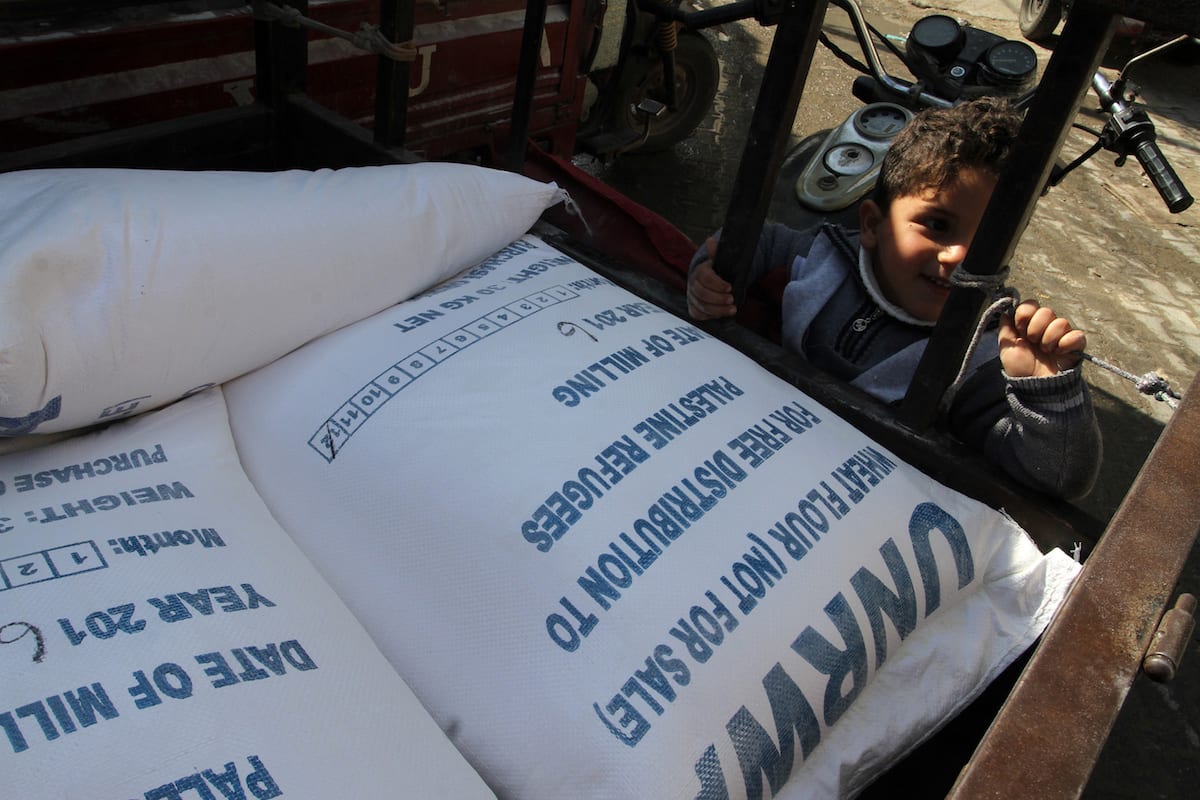 A Palestinian child stands next to the food aid given by UNRWA in Rafah, Gaza [Abed Rahim Khatib/Anadolu Agency]
Ahmed Haj Ali
July 28, 2018 at 1:00 pm

The United Nations Relief and Works Agency for Palestine Refugees (UNRWA) was created by a UN resolution in 1949. Given such an internationalised beginning, it should be expected that its work would be politicised from the very start and that the international status quo would be reflected in its administrative structure, functions and overall path. What's more, since the establishment of the UN and its various bodies, the governments of influential countries have accustomed us to the fact that funding is linked to the work of these committees, agencies and councils not being in conflict with the policies of the donor countries. Moreover, these governments continue to try to impose their policies on UN agencies.

UNRWA was not established to serve the refugees, but for other purposes, including to calm the Palestinians and the Arab masses, whose anger increased as they witnessed the suffering of the refugees. The agency was also created to preserve the stability of the Arab states to which the Palestinians had been expelled, most of which were developing countries.

The most dangerous aspect was the fact that UNRWA's launch basically entrenched the fait accompli of the creation of the state of Israel in Palestine. It signalled that there was an unspoken agreement by the international community that there would be no serious efforts to return the Palestinian refugees to their land; that UN Resolution 194 was nothing more than a release valve for people's anger. This meant that the Arabs should only think about how to help the refugees and not oppose their newly-created neighbour. The existence of such an agreement and understanding is evidenced by the fact that the Soviet Union and the United States both recognised the entity, and very quickly.

The funding of UNRWA was left deliberately to voluntary donations from UN member states; only a small amount was taken from the general budget of the main organisation. This has made UNRWA subject to the mood and foreign policies of the donor states. If the international community or influential countries decide to suspend UNRWA's work, it can be done on the pretext of suspending funding, which is one way to blackmail the agency.

In the early years of UNRWA, many Palestinians were able to reach senior positions in the agency, but over the years the recruitment policy has become more rigid, only rarely allowing such figures to emerge. International staff have increasingly become prevalent in key roles in UNRWA, although I do not deny that some have truly tried to develop the agency and sympathised with the refugees' issues.

During Al-Aqsa intifada, which began in 2000, UNRWA responded to pressure from Israel and some of the donor countries by banning its employees from addressing national affairs. They were even forced to sign a pledge not to engage in any political activity. To ban people under occupation from engaging in political activity in accordance with a decision made by a UN agency is very odd, especially given the international conventions that recognise the legitimacy of resistance to military occupation.

The largest manifestation of UNRWA's politicisation occurred after the Oslo Accords in 1993, when the agency launched its peace programme. It poured money into the areas under the Palestinian Authority's control and deprived refugees outside of these areas of many of their rights.

Hence, it was always likely that, in the face of the politicisation of UNRWA's work, the US would resort to reducing its donation to its budget in the context of the so-called deal of the century. This is an attempt to force the refugees into submission. However, anyone who knows the Palestinians in general, and the refugees in particular – their history of resistance for example, and their refusal to accept an existence at the expense of their dignity – knows that Trump's efforts will end in failure.