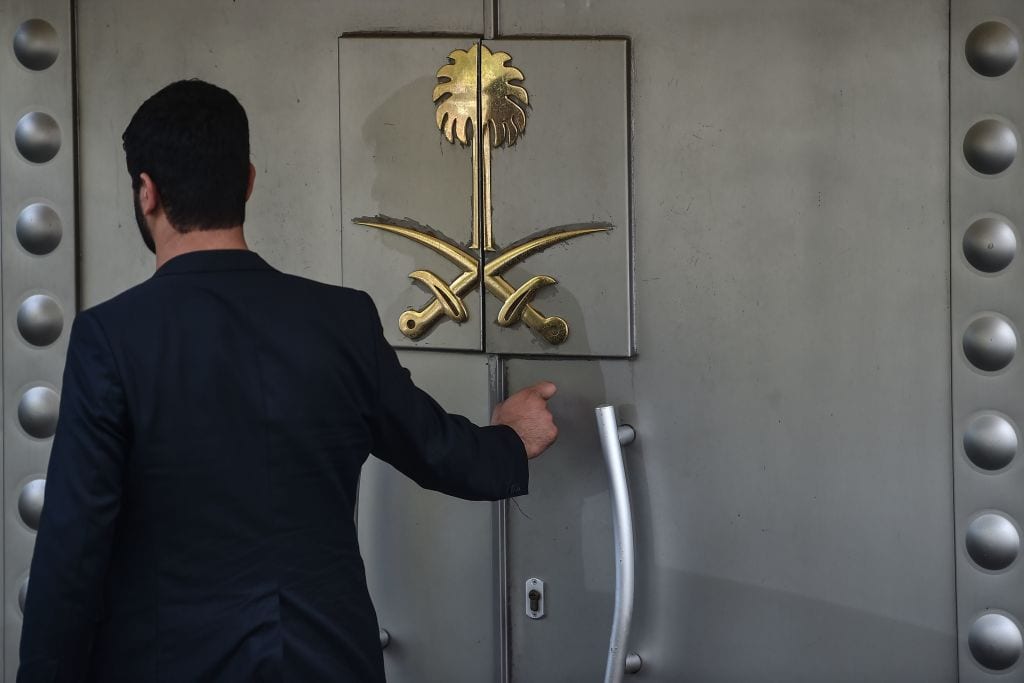 A Saudi official waits in front of the door of the Saudi Arabian consulate on November 1, 2018 in Istanbul. [Photo by OZAN KOSE/AFP/Getty Images]
November 14, 2018 at 1:31 am

The Turkish newspaper Daily Sabah published photographs of equipment used by the assassination squad to kill Saudi journalist Jamal Khashoggi inside his country's consulate in Istanbul earlier this month.

The newspaper reported that after the Saudi security team left Turkey the airport X-ray machines showed that the bags that were in possession of the potential assassins contained large scissors, a scalpel and an electric shock device.

Daily Sabah pointed out that the Turkish authorities did not manage to inspect the luggage, due to the suspects' diplomatic immunity.

The newspaper confirmed that the Turkish police did not detect any of the remains of Khashoggi's body in X-rays.

A few days ago, the same newspaper revealed Khashoggi's last words to the assassins who ended his life.

The head of the investigation unit at the Daily Sabah, Nazif Kerman, emphasised that Khashoggi was strangled by a bag placed on his head, according to sound recordings seized by the Turkish authorities."

Kherman said that Khashoggi's last words were: "I am suffocating, removed this bag, I am claustrophobic," right before passing away; noting that the strangulation lasted for seven minutes.

He added that the Saudi assassination squad covered the floor of the room with bags to prevent the leakage of blood while dismembering the victim.

Kherman indicated that the dismemberment took 15 minutes, and was carried out by the Saudi forensic expert Salah Al-Tubaigy. Afterwards, the body parts were placed in five large bags and transported in one of the Saudi consulate's vehicles.

He pointed out that the assassination team carried with them some tools and equipment when they came to Turkey.

Earlier this day, The New York Times revealed that the Saudi intelligence officer, Maher Mutrib, has called one of the Crown Prince's assistants from Istanbul, asking him to inform his boss that the mission had been accomplished.

Although the name of the Crown Prince was not mentioned in the recording, the Central Intelligence Agency (CIA) believes that the word "your boss" was a reference to Mohammad bin Salman, as speculations indicate that he is the one who ordered the assassination.