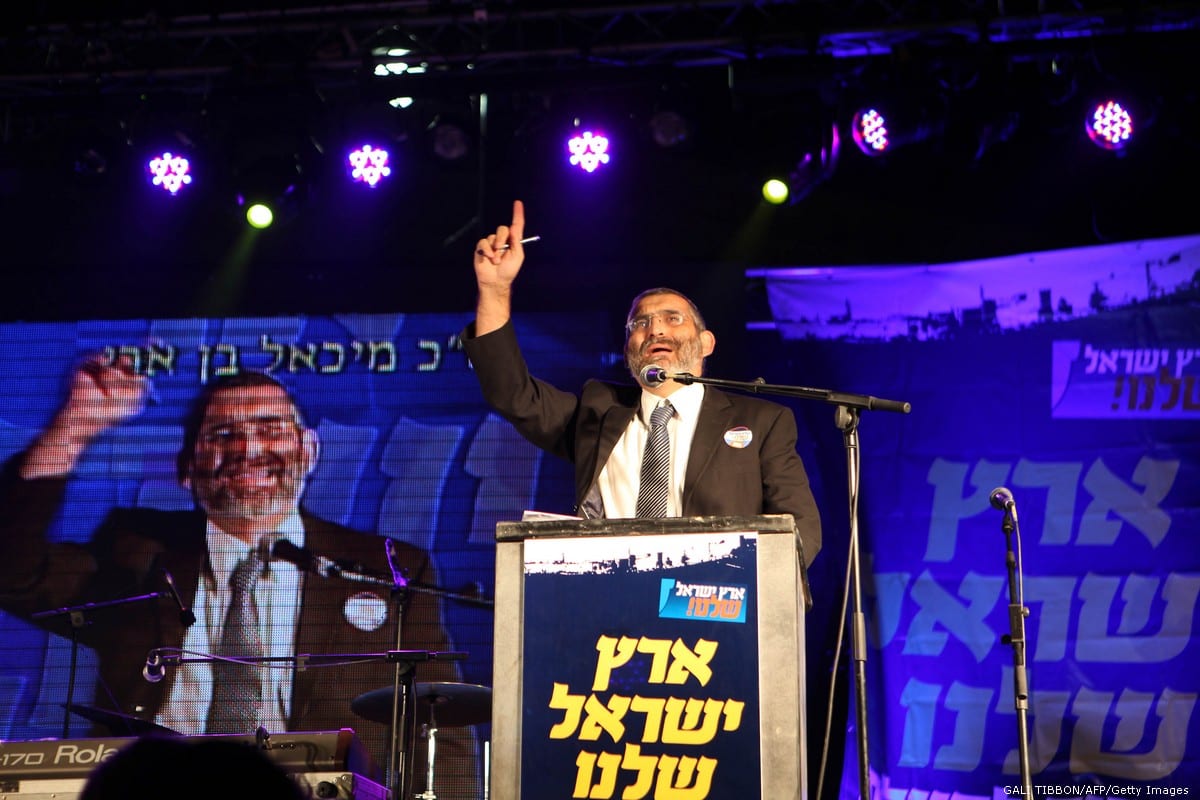 Though earlier today Mandelblit recommended that Ben Ari is banned from participation in the upcoming election on 9 April on the grounds of racism and incitement, the Knesset's Central Elections Committee – the body which oversees Israel's electoral process – this afternoon approved Ben Ari's election bid.

OPINION: Why the outrage? 'Jewish Power' party is the new norm in Israeli politics

Meretz's Freij told the committee: "This man [Ben-Gvir], who [hung] a photo of a murderer in his room is supposed to be an MK. This man, who's coming to deport me, is going to be a member of the Israeli Knesset." Freij was referring to the fact Ben-Gvir allegedly has a photo of Baruch Goldstein – the extremist Israeli settler who in 1994 massacred 29 Palestinian worshippers in Hebron's Ibrahimi Mosque – in his living room.

Goldstein was a follower of Rabbi Meir Kahane, whose Kach party was outlawed in Israel in the 1980s for incitement and racism. Like Kach, Otzma Yehudit advocates for expelling non-Jewish communities from Israel and termination of the status quo agreements on Jerusalem's Al-Aqsa Mosque compound.

The party has also sought to challenge what it sees as legal red tape restricting Israeli soldiers' actions, releasing a video which appears to advocate for a shoot to kill policy against Palestinians.

As a result of its extreme views, other political parties have lobbied for Otzma to be banned from participating in the election, filing a petition with Mandelblit to this end. Their efforts sparked a series of warring petitions, with incumbent Israeli Prime Minister Benjamin Netanyahu's Likud party – which orchestrated the deal to ally Otzma with the already-right-wing Jewish Home party to preserve the right-wing bloc – filing a petition against Israeli-Arab parties in retaliation. Mandelblit yesterday ruled that neither of the two Israeli-Arab alliances – Hadash-Ta'al and Ra'am-Balad – would be banned from participation, citing a lack of evidence to support such petitions.

However, Mandelblit's concerns about Ben Ari, in particular, remained given his history of openly racist and violent statements against Palestinians. In November 2017, for example, Ben Ari spoke at an annual memorial for Kahane, in which he said of Palestinian citizens of Israel: "Let's give them another 100,000 dunams [of land] and affirmative action, maybe they'll love us. In the end, yes, they'll love us when we're slaughtered."

In May 2018, Ben Ari gave another speech in which he said: "The Arabs of Haifa aren't different in any way from the Arabs of Gaza. How are they different? In that, they're here, enemies from within. They're waging war against us here, within the state […] They're our enemies. They want to destroy us."