Bedouin in Marsa Matrouh protest Egypt confiscation of their land 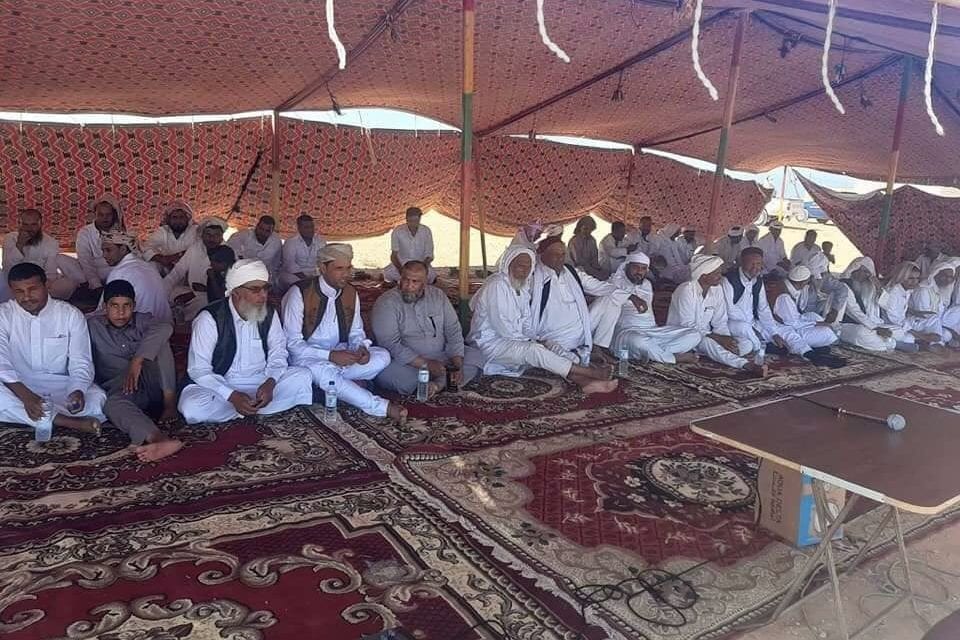 The people of the city of Negila west of Matrouh sit-in protest against the confiscation of large areas of their land on the coast and to pay compensation for houses only without the land they have been living for decades [Twitter]
August 19, 2019 at 1:40 pm

Bedouin in the city of Negila west of Marsa Matrouh are staging a sit-in to protest the confiscation of their land they say is being sold on to the UAE.

Marsa Matrouh is a coastal town 250 kilometres west of Alexandria and is known for its white sand and clear water. In 2010 it was sold as a new "hotspot" by the British travel companies Thomson and First Choice, which introduced direct flights to encourage holiday makers.

It is not just the British who understand money can be made from tourism here – the Egyptian army has discovered that projects on the north coast are very profitable. Property on the beach is regularly demolished on the grounds that it had been built on state owned land, compounding fear that the land is being sold to foreign investors at the expense of locals.

READ: Under the war on terror Egypt is ethnically cleansing the Sinai Bedouin

This is taking place across the country. At the beginning of August President Abel Fattah Al-Sisi announced that 47 state-owned islands in the Red Sea, used mainly for the purposes of tourism, were of strategic military importance and were being allocated to the army.

The Governor of Matrouh, Alaa Fathi Abou Zeid, is a former military intelligence director and has been key in attracting foreign investment in the governorate. In the run up to a November 2015 economic conference held in Marsa Matrouh Zeid visited the UAE twice.

During the conference the UAE and Saudi Arabia pledged millions of dollars to develop property on the north coast including the Matrouh Port estimated to cost $10 billion.

Zeid has said: "I seek inspiration from Dubai… Give me the funding and I will turn [Matrouh] into Dubai tomorrow."

The local Bedouin have lived on the land for centuries though they are treated as second class citizens. They are not offered new houses and the compensation, if it is offered, is minimal. They are forced to move south, away from water and transportation.

The Bedouin in Sinai are also undergoing ongoing and systematic discrimination including the forcible displacement of 100,000 people on the grounds that their houses were built on state-owned land, and the transfer of land into military control.

In 2017 houses in Warraq Island were bulldozed and residents evicted after they were accused of illegally squatting on state owned land.