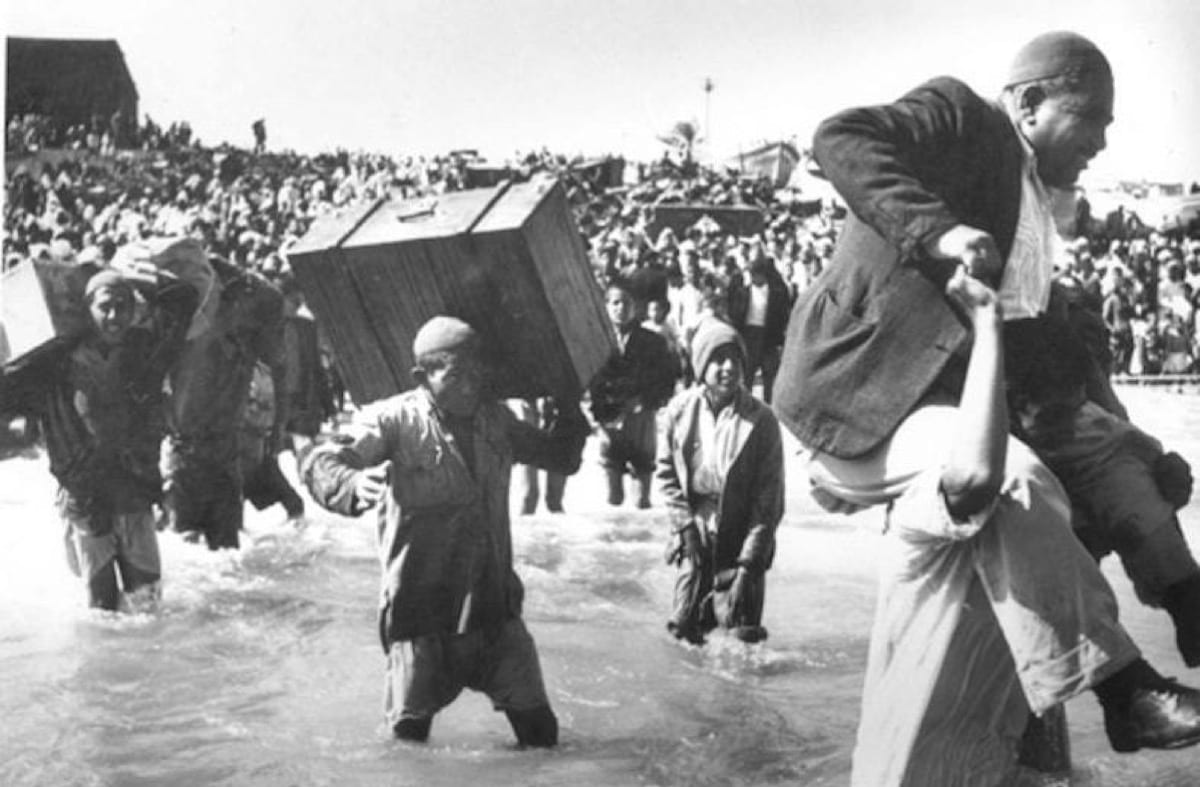 Palestinians can be seen fleeing their homes during the 1948 Nakba, also known as 'The Great Catastrophe'

Between 1947 and 1949, Zionist militias and the newly-formed Israeli army expelled more than half of the indigenous population of Palestine.

Some 800,000 Palestinians were either forced out literally at the barrel of a gun, or fled in fear of being massacred by the Zionist forces.

This is commemorated by Palestinians every year as "Nakba Day" – Nakba meaning "catastrophe" in Arabic. The establishment of Israel was, and remains, a complete and utter disaster for the indigenous people of Palestine.

But Nakba Day is not only about memory – it is about resistance.

The Nakba was not a singular event, centred around 15 May, 1948 – the day after the new state of Israel was established.

READ: How We Became Refugees: The Day My Grandfather Lost His Village in Palestine

As leading Palestinian intellectual Joseph Massad has for many years explained, the Nakba has never really ended.

Zionist expulsions, dispossessions and killings of the indigenous people of Palestine continue right up until this very day. The Nakba then, not only has a continuous, decades-long history, but it has a future for as long as Zionism endures.

In 1948, the Zionist militias carried out strategic massacres of Palestinians villages in order to act as examples to the rest, encouraging the villagers to flee in fear. The Deir Yassin massacre is only the most well-known example of this.

The refugees fled in 1948 because they feared for their lives, and because they were expecting to be able to return after the war was over. But they have never been permitted to return – solely because they are not Jewish.

Immediately, Israel began importing Jewish people from around the world – as if they were human cargo – in order to encourage, and (in some cases) compel them to become settlers in the newly-established Jewish state.

In the years immediately following 1948, Israel established a series of racist apartheid laws which permitted Jews from around the world – regardless of the reality of their family links to the country – privileged access to, and the right to settle in and receive citizenship in the new country.

This was codified under the "Law of Return" – which is based on the ahistorical contention that all Jews the world over are somehow "ethnically" related to ancient Palestinian Hebrews.

READ: On the Nakba anniversary, the two-state politics hold more value for the PA

At the same time that Israel established these racist laws, it denied Palestinian refugees and their decedents the right to return to their homeland, despite this right being enshrined in international law.

Palestinian refugees are still denied their right of return until this day.

In recent years, Palestinians in Gaza began a regular "March of Return" (the population of the Gaza Strip is two million-strong – consisting of about 70 per cent refugees). In a series of brutal reprisals for having the sheer audacity to peacefully exercise their rights under international law, Israel mowed hundreds of them down in cold blood using sniper bullets.

Most world leaders did little more than toothlessly protest – if they were not actively encouraging the slaughter.

After 1948, Israel systematically handed over the land and homes of the dispossessed Palestinians refugees to Jews from Europe, and later from the Middle East.

READ: The world must halt Israel's annexation and reverse its colonisation of Palestine

In fact, many Palestinian villages – more than 500 of them – were systematically wiped off the face of the earth by the Zionist militias and the new Israeli army, using bulldozers and dynamite.

It is, however, today untrue to say that such geography books do not exist. Thanks to pioneering Palestinian historians and geographers like Walid Khalidi and Salman Abu Sitta, we know today exactly where the destroyed Palestinian villages were, and which Israeli settlements are built on their ruins and on their lands.

As Abu Sitta has shown, the right to return is no mere abstract principle, but is an eminently practical and realisable goal.

Palestinians have a right to return to their homeland.

Justice, freedom and equality demand it.

There will be no peace in the Middle East until Israel is compelled to recognise these facts.