Black Americans and Palestinians 'can't breathe' because of injustice 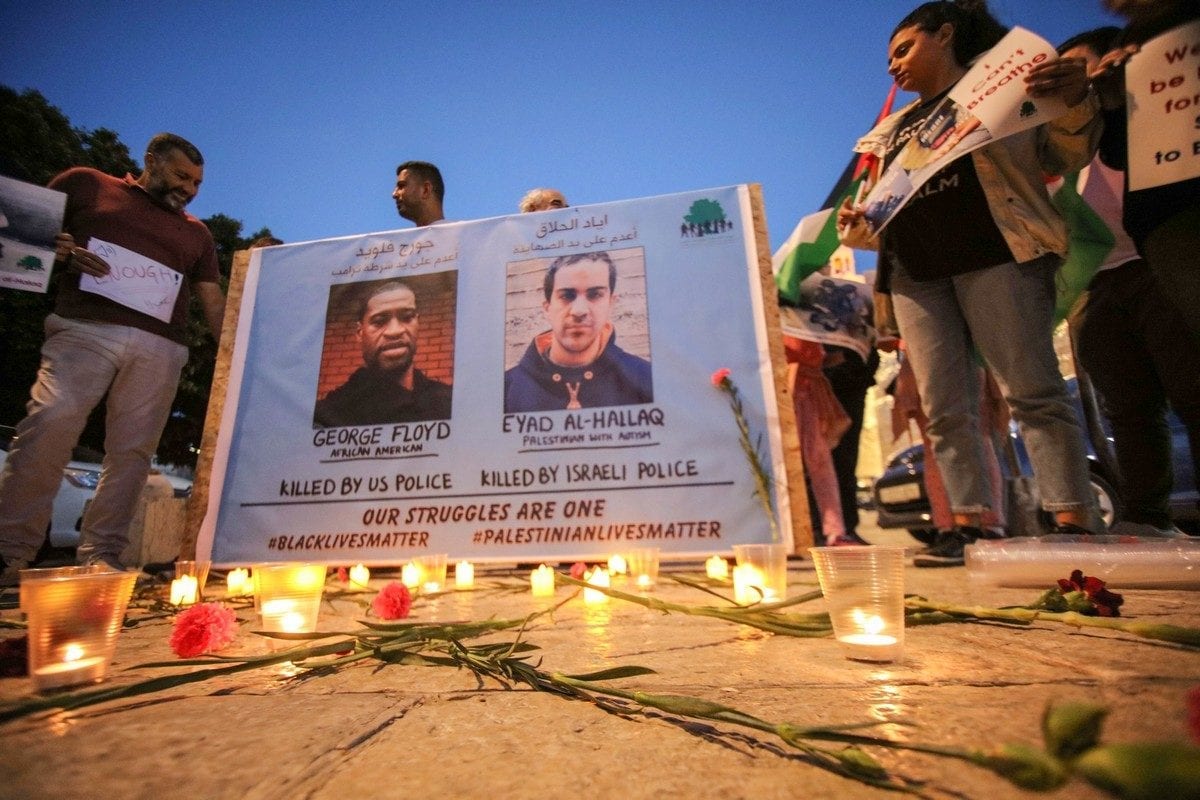 Palestinians in Gaza show solidarity with the Eyad Hallaq, an autistic Palestinian man who was shot dead by Israeli police and with US protesters following the death of George Floyd who was killed by a white police officer by pinning him to the ground, 2 June 2020 [Abedalrahman Hassan/ApaImages]

Over the past week, two brutal events added more sadness to the morbid climate of the coronavirus pandemic. In Minneapolis, a black American citizen was killed by a police officer, and then an unarmed 32-year-old Palestinian man with special needs was shot and killed by an Israeli police officer near the Old City in occupied East Jerusalem.

Brutality is a common factor between racist powers. It should encourage oppressed communities to rise and unite in the quest for justice. There is now an opportunity for the Palestinian-led Boycott Divestment and Sanctions (BDS) and Black Lives Matter movements to join on a broad platform to expose the ugly face of fake democracies.

The resilience of both movements in the face of brutal dehumanisation is inspirational to anyone who cares about civil freedoms. For decades, the Palestinians have been suffering from Israel's occupation, settler-colonialism and apartheid regime. For the black community in America, the situation is no different. They have been discriminated against and denied their Constitutional right to protest against injustice in the face of extreme police responses to their demonstrations. Explicit and implicit racism has always been present in American society, but not always endorsed in all but name by the President of the United States.

The racial supremacists leading the US and Israel appear to be unable and unwilling to tolerate even peaceful protests against their regimes. In 2016, Colin Kaepernick, an American football star decided to kneel during the US national anthem prior to a game in protest against racial injustice, police brutality and systematic oppression against minorities, especially the African American community. Donald Trump publicly eviscerated Kaepernick. He went after the athlete many times on the election campaign trail. Kaepernick was demonised and accused of being a traitor for "taking a knee" to make his silent but powerful protest. Taking a knee has become a preferred mode of protest by those supporting black Americans in their struggle against racism; indeed, against racism everywhere.

Similarly, Palestinians and their supporters who call for boycotts of Israel and Israeli goods and services because of the Zionist state's ongoing oppression of innocent civilians in the Occupied Palestinian Territories are demonised as "terrorists" and "anti-Semites". Such allegations by Israel and its supporters, especially those in Washington, can have very serious repercussions for individuals and organisations.

In the past six years alone, American police officers have killed 7,666 people, a disproportionate number of whom were black citizens, who make up only 13 per cent of the total population. According to research and advocacy group Mapping Police Violence, black Americans are two-and-a-half times more likely than whites to be killed by the police. George Floyd's killing was caught on camera, as was Eric Garner's in 2014, when he was arrested viciously by a police officer who threw his arm around his neck and pulled him to the ground. Floyd's final please of "I can't breathe" has become the rallying cry of protesters against brutality and injustice all over the world. 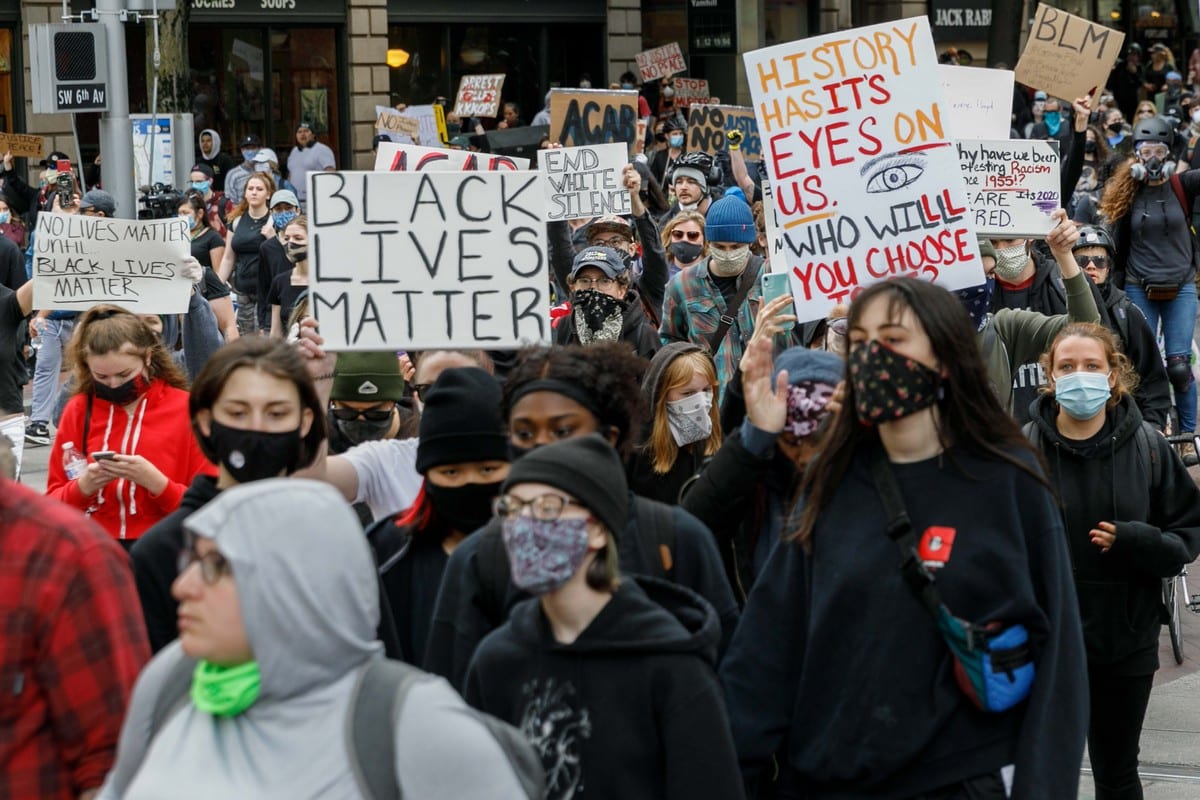 People protest over the death of George Floyd an unarmed black man who was killed after being pinned down by a white police officer in Minneapolis, US, 31 May 2020 [John Rudoff/Anadolu Agency]

Israel has killed and wounded hundreds of thousands of unarmed Palestinians over the years of its occupation, most recently during the Great March of Return protests at the nominal border of the Gaza Strip since March 2018. Palestinians "can't breathe" because of the suffocating blockade imposed by Israel and its supporters on the coastal enclave. In occupied Jerusalem and the West Bank, Palestinians are being killed and injured by illegal settlers who have usurped their lands and ejected them from their homes. Others are imprisoned and deported by Israel simply because they want to perform their prayers in Jerusalem's Al-Aqsa Mosque.

US police crimes against the black community and Israeli settler and occupation forces' crimes against the Palestinians continue because they are condoned by the silence of the international community. This puts more pressure and responsibility on the oppressed parties and justice-seeking people everywhere to build coalitions around common interests and unite to face the increasing threat posed by officially-sanctioned brutality and criminal activities.

The BDS movement released a statement to announce its solidarity and unwavering support for Black Lives Matter protesters against police brutality in the US and elsewhere. In 2016, Black Lives Matter accused Israel of committing "genocide" against the Palestinians and backed the BDS movement. Israel was described as an "apartheid state" when Black Lives Matter called for an end to US support for the occupation state. The statement was drafted by more than 50 organisations and set up the policy platform and the vision of the Black Lives Matter movement. It went beyond criminal injustice against people of colour and touched on many issues such as the US administration's military aid to Israel. "The US," it declared, "is complicit in the genocide taking place against the Palestinian people."

Today, the BDS movement has proclaimed clearly its unequivocal stance by declaring that, "The savage enslavement of millions of Africans constitutes the most profound pillars of what became the US." It reiterated the fact that the white supremacist ideology which has tried to whitewash criminal actions is alive and well, albeit in different garb than in years gone by.

This ideology is invigorated by the unapologetically racist President of the United States. Donald Trump's administration has issued anti-racist platitudes while simultaneously failing to act against racial and economic injustice. As his comments since the killing of George Floyd have demonstrated, Trump is unlikely to put an end to the horrendous marginalisation of America's black citizens anytime soon, least of all in an election year.

We saw in apartheid South Africa that a viciously racist political system could be overcome when people stand together in solidarity. The Palestinians have stood firm against a brutal military occupation with determination, resistance and ingenuity. Together, Black Lives Matter and Palestinian freedom movements can achieve great things if unity and their common humanity are at the core of all that they do.

READ: With unrest across the US, asks the Twittersphere, where is the 'Free American Army'?