The official Twitter account for Israel has questioned Jesus' Palestinian roots, claiming he was Jewish and not linked to a nationality.

The comment came in response to a post by satirical account, which is run by award-winning comedy writer David Javerbaum, who questioned a common traditional Euro-centric depictions of Jesus with fair skin accompanied with a caption stating: "Privilege doesn't get much whiter than making a Roman-era Palestinian look like this." The reference comes amid growing debate surrounding "white privilege" in the aftermath of the latest racist killing of an African-American by police in the US, leading to unprecedented protests and riots across the country.

However, Israel – which in Hebrew means "one who struggles with God", replied asserting Jesus' Jewish heritage stating "God: Jesus was a Palestinian. Jesus: Hey Dad, remember when you gave that speech about Jewish values at my Bar Mitzvah?"

Privilege doesn't get much whiter than making a Roman-era Palestinian look like this. pic.twitter.com/i05NG7FlVm 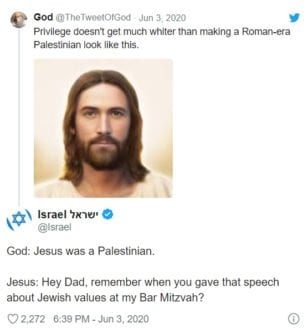 According to the New Arab, in a now-deleted tweet "God" responded with "TheTweetOfGod: Jesus wasn't actually fair-skinned. Israel's Twitter account: Hey TheTweetOfGod, I am the official Twitter account of the State of Israel and I am going to officially respond to you for the world to see and also Palestinians suck," to which Israel's account replied "And on the eighth day G-d created Google Translate."

Another user pointed to Jesus being referred to as the "Son of God" by Israel's account and asked when this was accepted given that mainstream Judaism does not accept Jesus as the Messiah, though he is accepted as such by Christians and viewed a prophet by Muslims.

The physical appearance of Jesus has been debated over the years, with the final book of the New Testament, Revelations hinting that Jesus had tanned skin and curly hair not too uncommon for people of the Middle East. According to some Islamic narrations, Jesus is described as having a reddish complexion.

The birthplace of Jesus is also hotly contested, with arguments made that he was from first-century Roman province of Palestine, although he was born in Bethlehem and grew up in Nazareth, Galilee.

READ: Church of the Nativity reopens as lockdown eases in occupied Palestine