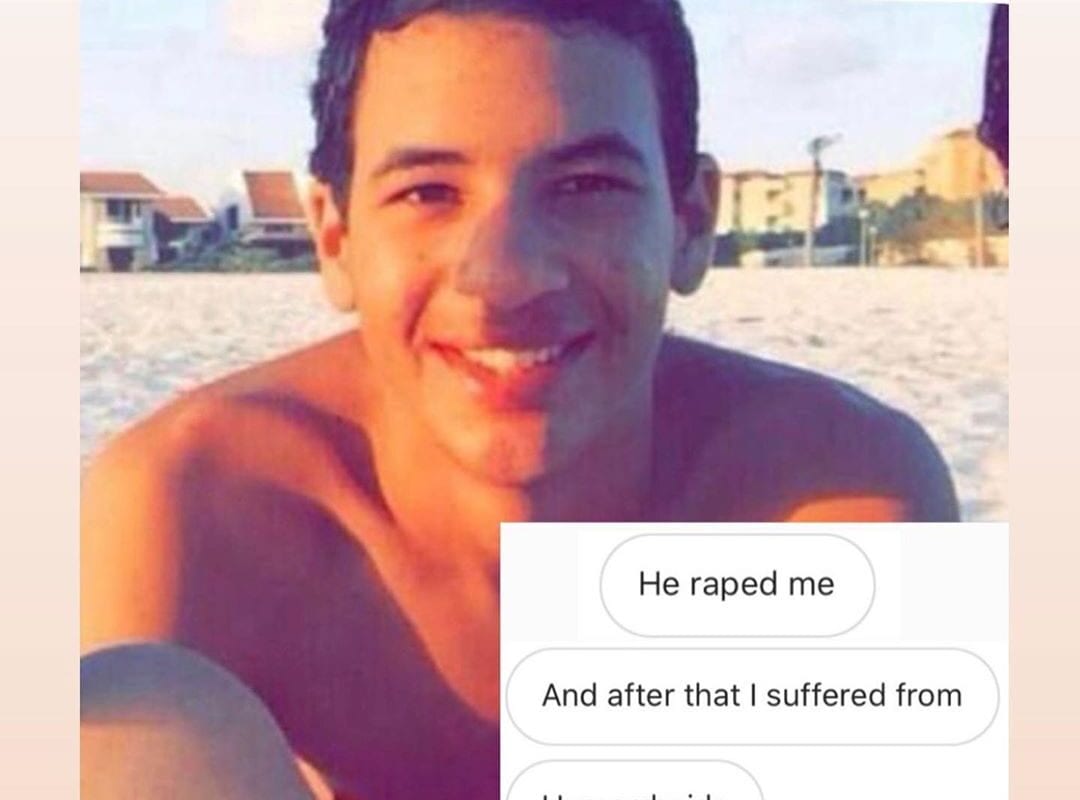 A graphic calling Ahmed Bassem Zaki a rapist, posted on an Instagram profile claiming to collect evidence against him [assaultpolice / Instragram]
July 3, 2020 at 12:55 pm

An Egyptian man in his twenties has been accused of sexual crimes by over 50 women.

The first complaint levelled against Ahmed Bassam Zaki came from a student at the American University of Cairo in 2018 who accused him of harassing her and her friends, according to Egyptian Streets.

She wrote a post detailing the incident on the RATE AUC PROFESSORS Facebook group which gathered thousands of comments. Earlier this week administrators deleted the post.

After the post was deleted dozens of women shared their stories and experiences from as far back as 2016 under the trending Arabic hashtag 'the harasser Ahmed Bassam Zaki'.

The reports detail rape, sexual assault and sexual harassment whilst Zaki was studying at the AUC and then at the EU Business School Barcelona.

The business school has now suspended him until further investigations are carried out.

Several women said Zaki had blackmailed them by using fake and real nude shots and threatened to share them with family and friends, or tell them stories about sexual encounters.

He also tried to emotionally manipulate them by threatening to self-harm and commit suicide.

Zaki used social media to message women asking for their numbers and to ask them to carry out inappropriate favours.

In 2016, Zaki was a senior at the American International School (AIS) in Cairo. According to Egyptian Streets sources confirmed to them that the management there were aware of the allegations against him yet didn't take punitive action against him.

At the same time women were warned about engaging in sexual contact and sharing photos of themselves on social media.

At the time, a Facebook group was created by Zaki's classmates expressing solidarity with him and asking that his reputation not be ruined.

Egyptian authorities have long been criticised for rewarding the perpetrator and not the victim.

In May 17-year-old Menna Abdel Aziz recounted being raped by one of her friends in a live Facebook video and was then arrested and accused of "inciting debauchery and violating family values."

More than 100 girls provided evidence that Ahmed Bassam Zaki has previously harassed them online or in real life. This took place IN prestigious institutions such as MES (Modern English School Egypt), AIS (American International School Egypt), AUC (American University in Cairo), and many others. He was well educated, he was well connected, yet none of that stopped him. When sexual harassers are not stopped and are enabled by the institutions they attend or their work place, they turn into PREDATORS and RAPISTS. Ahmed Bassam Zaki is a serial sexual predator and rapist. This girl's story is another incredibly painful read, but our stories must be heard. #المتحرش_أحمد_بسام_زكي #abz