Half of Egypt's population wanted by the Public Prosecutor 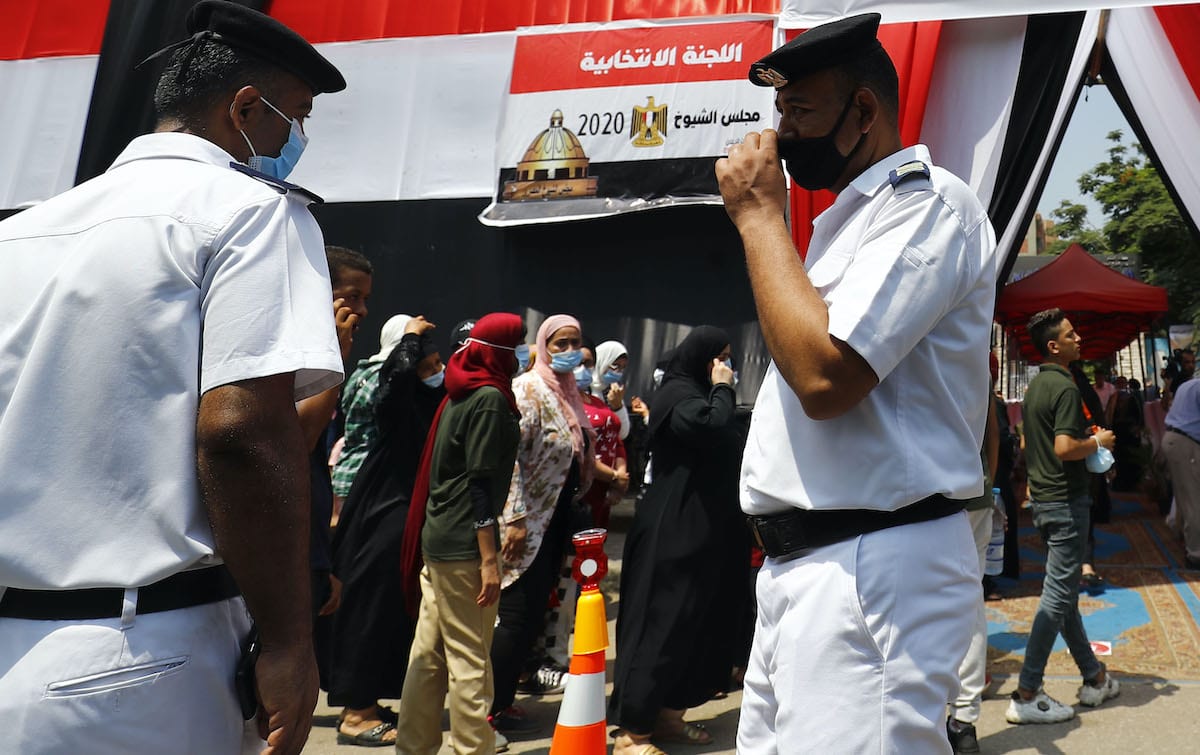 Egyptians, mask-clad due to the COVID-19 coronavirus pandemic, queue up outside a polling station on August 11, 2020 for a new senate in an upper house election. [KHALED DESOUKI/AFP via Getty Images]
Osama Gaweesh
osgaweesh
August 30, 2020 at 8:49 am

The National Elections Authority in Egypt have decided to refer more than half of the Egyptian people to the Public Prosecutor to investigate the fact that more than 54 million Egyptian citizens did not participate in the Senate elections last week.

I could not believe my eyes while reading the news and I thought for a moment that it was a hoax, but I was surprised when I listened to the statements of Counsellor Ibrahim Lashin, head of the National Elections Authority, explaining the circumstances of this strange decision and its legal basis.

According to Article 57 of the Law on Exercising Political Rights decreed No. 45 in 2014, anyone who fails to participate in the elections will be punished with a fine equivalent to 500 Egyptian pounds. In this case, it means that if 54 million Egyptians are summoned (equivalent to 85 per cent of eligible voters and 50 per cent of Egypt's population) or the full value of the fine has been collected from all of them, the state will earn approximately 26 billion and 990 million pounds.

Is it worth it?

This is the question that is worth answering, especially as the Senate is nothing but a decorative facade that has nothing to do with making any decisions in the country's political life. Even the decision to form this council was made in the recent constitutional amendments in which Al-Sisi demanded to remain in power until 2030. Some superficial features were added so that it does not appear that Al-Sisi only wants these amendments to serve himself. The formation of the Senate was among those absurd features.

The Senate is composed of 300 members, 100 of whom are appointed by Al-Sisi, 100 nominated by the closed-list system and 100 by the single-seat system.

Remarkably, in addition to the 100 members appointed by Al-Sisi, only one list has been put forward to contest the other 100 seats, which is the pro-Al-Sisi party, The Nation's Future, in association with other parties. In effect, this means that they were elections based on the scenario, dialogue and direction of Abdel Fattah Al-Sisi and his associates.

In any democracy, if 85 per cent of the electorate decided for different reasons to abstain from participating and voting, the parties would react by immediately recognising their defeat by the electorate. Furthermore, they would resign straightaway having failed to pass the test of voters' confidence. Alas, reality confirms that there is a vast difference between democratic systems and experiences on the one hand, and what Egypt is currently experiencing under Al-Sisi on the other.

On the contrary, instead of examining the political failures of the regime and its allies, there was talk on pro-regime satellite channels of collecting these fines from half of the Egyptian people and trying to answer the question: Can the Public Prosecution accommodate the appearance of more than 50 million Egyptians at its headquarters?

Some jurists proposed five effective means that the state can adopt to collect those fines from the Egyptian people: when a citizen seeks to acquire a personal identification card; when the apply for a driving license; when they immediately pay the fine that would be sent to each citizen's address and he or she must pay it directly. Otherwise, it could be deducted from the employee's salary or perhaps by surprising the citizen when he attempts to obtain any official document that he must pay 500 EGP. 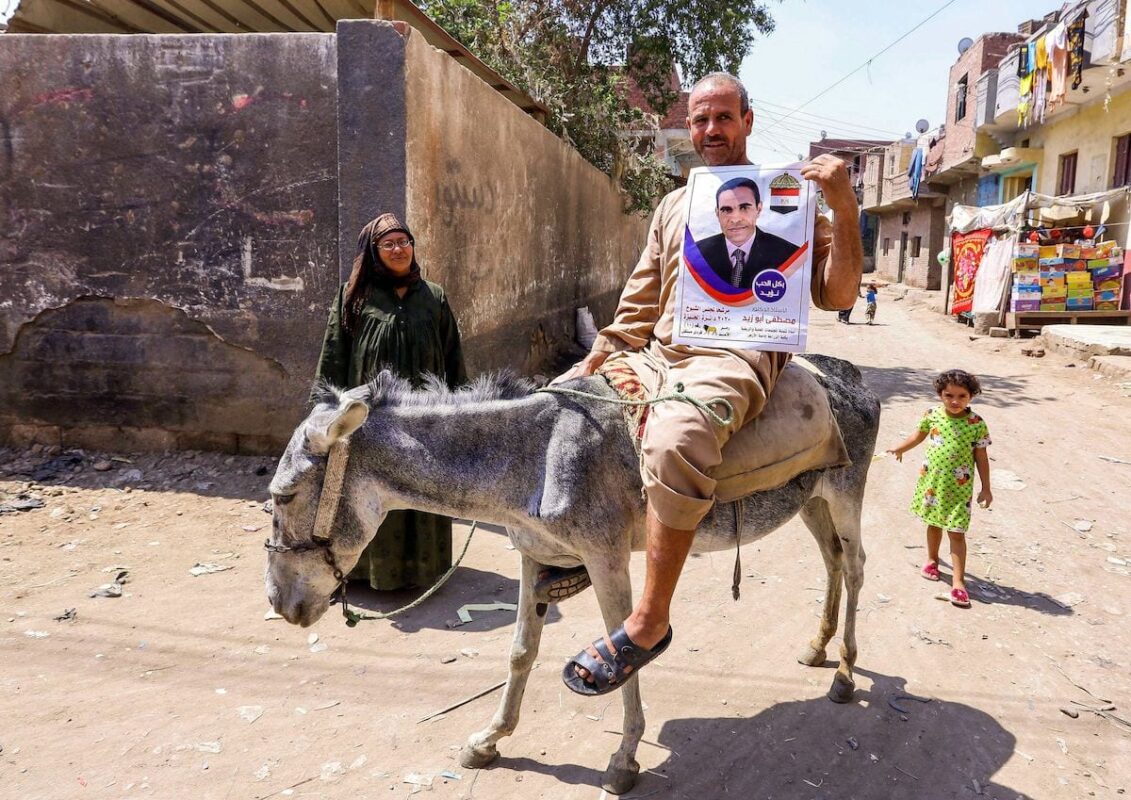 A man riding a donkey near a polling station in the town of el-Ayyat in Giza province south of the Egyptian capital on 11 August 2020 holds an electoral poster for a candidate running for the upper house election in the newly-created Senate. [AFP via Getty Images]

The regime have raised a banner that reads:  the people are "wanted by the Public Prosecution," and therefore the state, with its security and judicial apparatus and agencies, will pursue half of the Egyptian people. In future, citizens will be afraid to go to governmental institutions. Every month they will wait to make sure that they received their full salary, without any deduction. When they go to obtain any official document or renew a driver's license they will be looking around anxiously, awaiting the moment of arrest to force them to pay the fine for abstaining from voting.

What the regime does is contrary to Article 65 of the Egyptian constitution issued in 2014, which stipulates: "Freedom of thought and opinion is guaranteed. Every person has the right to express his opinion in speech, writing, photography, or other means of expression and publication."

However, the current Egyptian regime does not recognise the freedom of opinion or the right of the Egyptian citizen to express himself. The regime creates a Senate by choosing Al-Sisi with candidates close to him and contestants who owe loyalty to him, as if the concept of freedom of opinion in this regime is "the right to express what Al-Sisi wants."

Since 2014, the current Egyptian regime have been experiencing an internal crisis with the concept of legitimacy of elections and the people's choice. The regime, which staged a military coup on the first democratic experience after the January Uprising, is still gripped by the spectre of fear. Al-Sisi regards every new election as a fresh referendum on his survival and legitimacy in power.

The issue here is not in the Senate but in the Egyptian Parliamentary elections that will take place within the next month. Al-Sisi and his regime will not be able to bear a scenario similar to the fake Senate elections.

The strategy of fear and economic pressure on the Egyptian people is the most prominent feature of this current regime. With more than 60 per cent of Egyptians living below the poverty line according to the latest World Bank data, the spectre of the 500-pound fine in the elections haunts the poor and ordinary citizens of Egypt.