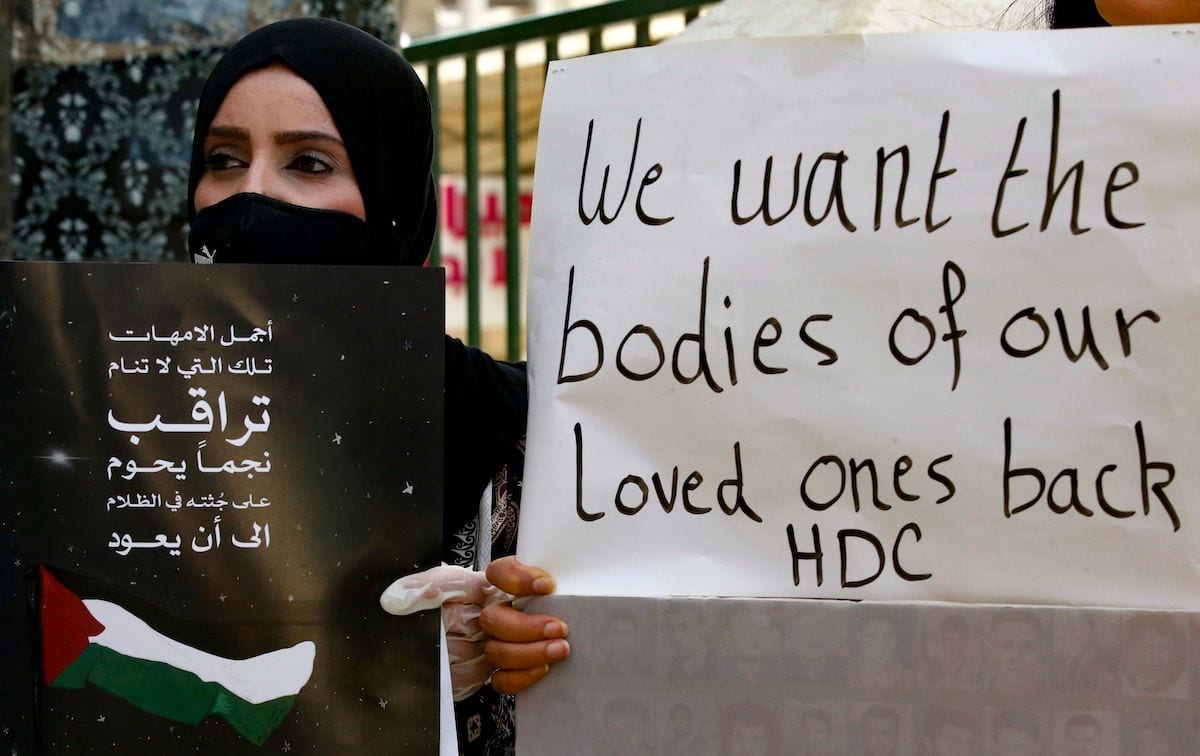 Palestinians hold placards during a demonstration to demand the return of the bodies of relatives who were allegedly involved in attacks and consequently killed by Israeli forces, in the West Bank town of Hebron, on 30 August 2020. [HAZEM BADER/AFP via Getty Images]
Ahmed El-Komi
September 10, 2020 at 11:00 am

Two days after the Palestinian resistance groups and Israeli occupation authorities reached a ceasefire agreement last week, Israel's Defence Minister Benny Gantz made a request to the State Security Cabinet to continue retaining the bodies of Palestinian martyrs. The cabinet gave its approval last Wednesday at a time considered carefully by Israel.

The Israelis have retained dozens of Palestinian bodies and refuse to return them to their families, claiming that they were killed while carrying out or trying to carry out attacks against the occupation state. They are kept in special refrigerators and graves surrounded by stones, but without headstones. Instead, a metal plate is laid over each grave with a specific number, hence these are called "cemeteries of numbers", as the graves are assigned numbers instead of the martyrs' names.

The Israel Broadcasting Authority reported the cabinet's approval of Gantz's request even if the martyrs were not affiliated with Hamas. It is as if the minister — and Alternate Prime Minister — wanted to draw attention to his revenge against the movement. It also allows him to act as a leader and limit his war to one opponent.

"Not returning terrorist bodies is part of our commitment to the safety of Israeli citizens," explained Gantz, "and of course to returning the boys home." The latter was a reference to four Israeli soldiers captured by Hamas in 2014.

READ: Has annexation been cancelled or merely postponed?

The cabinet decision follows one made by the Israeli Supreme Court exactly a year ago on 9 September which gave the occupation authorities the green light to continue to withhold the bodies of Palestinians. This makes Israel the only country in the world that continues to adopt a policy to abuse corpses, in clear and provocative defiance of the international community and disregarding all of legal and social norms. 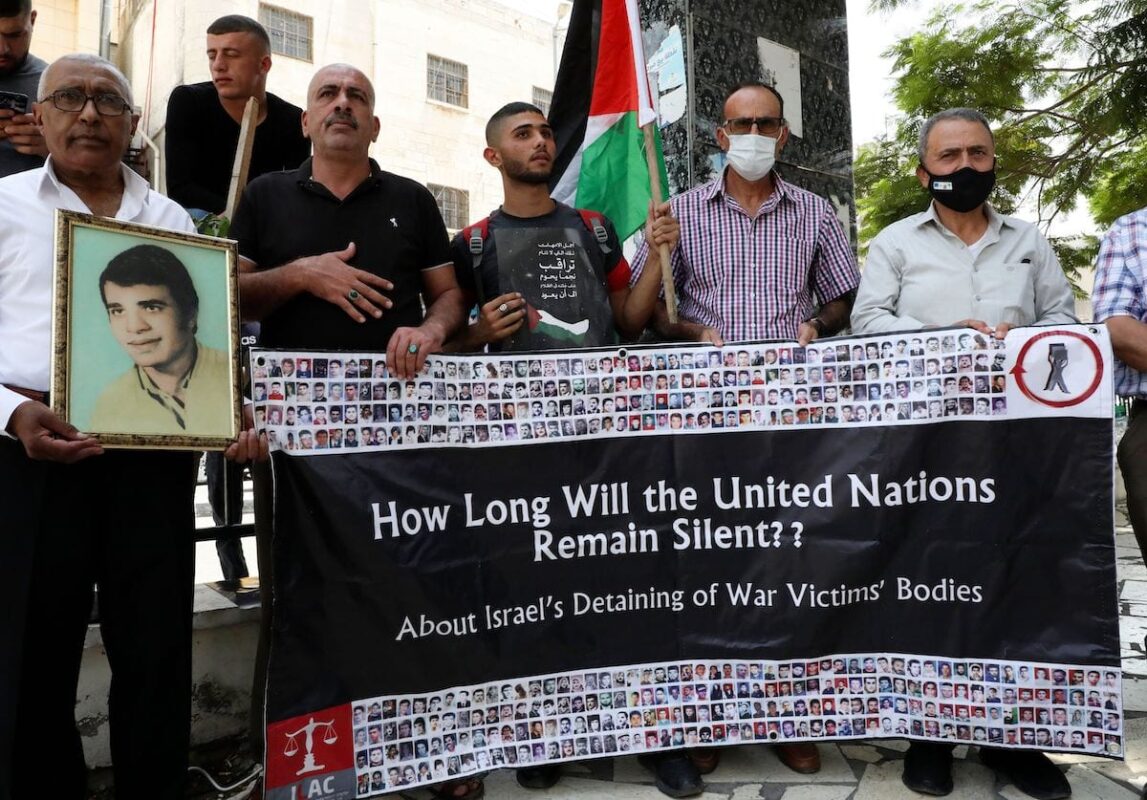 Palestinians hold placards during a demonstration to demand the return of the bodies of relatives who were allegedly involved in attacks and consequently killed by Israeli forces, in the West Bank town of Hebron, on 30 August 2020. [HAZEM BADER/AFP via Getty Images]

The timing of the latest decision served to cover up for Gantz's failure against the Palestinian resistance and as an attempt to calm Israeli citizens and avoid their questions and criticism. He had said arrogantly a few weeks ago: "In the South, Hamas is continuing to enable explosive balloon attacks to be launched into the State of Israel. We are not prepared to accept that and have closed the Kerem Shalom border crossing as a result. They would do well to stop violating Israel's safety and security. If that doesn't happen, we will need to respond, and forcefully." However, he did not dare scratch a single Palestinian boy launching the balloons from Gaza.

Gantz followed his decision to retain the bodies with support for the construction of 5,000 illegal settlement housing units in the occupied West Bank, demonstrating that he was seeking an imaginary victory that provides an escape route for him to evade embarrassing questions after his failure. He wants to preserve his image as a strong minister in the face of danger and the politically "clean man" in Israel's dirty political environment.

This is not typical behaviour by Gantz, a graduate of the school of Israeli military leadership; it is more appropriate for someone looking for a way out, like those used by former Israeli generals and ministers who were always looking for a victory of another kind. They run away from having to provide explanations and answers about defeats.

In Gantz's case, it seems that five months of working with Prime Minister Benjamin Netanyahu has taught him how to bluff his way out of tricky situations. However, many of the decisions made by Netanyahu and Gantz — both of whom are adept at deception — are affected by the positions that the Palestinian resistance groups impose on them. The only response that a minister of Gantz's status can come up with is to flex his muscles… and hold on to the bodies of Palestinian martyrs.