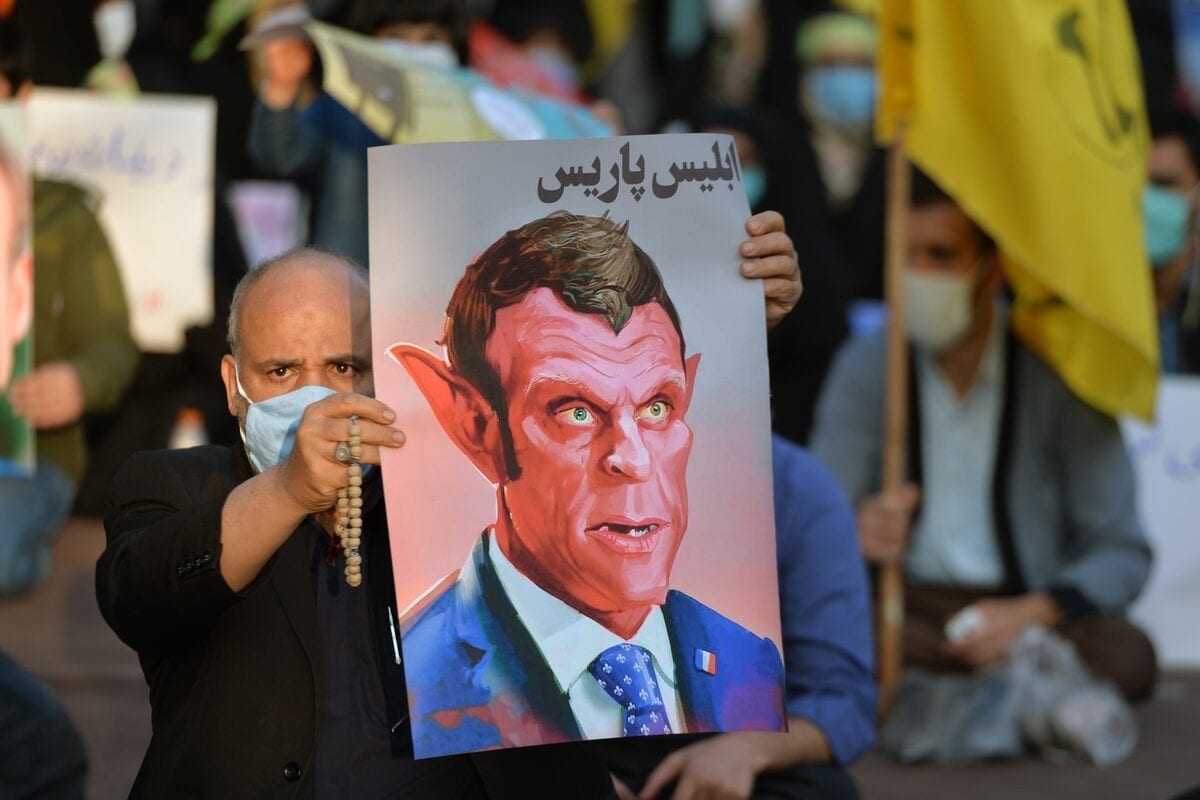 Demonstrators gather in front of Embassy of France in Tehran during a protest against the publication of cartoons of Prophet Muhammad in France and against President of France Emmanuel Macron over his anti-Islam remarks, on October 28, 2020 in Tehran, Iran [Fatemeh Bahrami - Anadolu Agency]

There is no doubt that Emmanuel Macron is in a crisis with his racist self, first and foremost, followed by a crisis with his people. The former is deep rooted. When he first stood for the presidency he was forced to address French Muslims and cosy up to them in order to get their votes. He made false promises, including a guarantee that they could practice their religion freely and enjoy freedom of expression. When he was asked on TV for his view of veiled Muslim women, he answered that he respects and appreciates them and that it is a personal choice that all French people must respect. This, he insisted, was in accordance with the values of the French Republic, which guarantee personal freedom for everyone in society and the right to citizenship.

Thus misled, 92 per cent of eligible French Muslim citizens — there are 6.6 million of them — voted for him, and Macron duly became President of France. He has since broken his promises which, as the Egyptians say, was like the butter covering the night talk that melted away when daylight came.

The pro-Israel lobby also played a part in his election win. To repay the favour, he announced at the annual dinner of the Council of Jewish Institutions in France that his government would adopt a draft definition of anti-Semitism which conflates anti-Zionism with anti-Semitism. He urged parliament to link the two so that unacceptable hostility towards Jews would be equated with legitimate criticism of Israel's politics, policies and practices. At a stroke, he sought to make the latter illegal.

The UN actually declared Zionism to be a form of racism and racial discrimination in 1975, before it was forced to cancel the resolution in 1991 as a condition of Israel's participation in the Madrid peace conference. Zionism is a political ideology that emerged at the end of the nineteenth century the founder of which, Theodor Herzl, wanted to establish a national home for the Jews in Palestine.

READ: Macron's real crisis has more to do with French values than Islam (Part 1)

That announcement by Macron aped the statements made by Israeli Prime Minister Benjamin Netanyahu who has pushed the anti-Zionism equals anti-Semitism argument in order to have legitimate criticism of Israel made illegal in those countries which have criminalised — rightly so — anti-Jewish racism. Such a move in France, however, curbs freedom of speech and opinion, which is cited as being fundamental to the values of the French Republic. Macron basically sacrificed the values that he praises and uses to justify his criticism of Islam and Muslims in order to appease the pro-Israel lobby. In Macron's France, Israel is above criticism of any kind, even when it treats international law with contempt. Many non-Zionist Jews have objected to this.

We are entitled to ask why the French president has not also outlawed criticism of Islam and Muslims to guarantee respect for their beliefs and customs and criminalise those who are hostile to them. Not only would that fulfil Macron's election promise, but also ensure that all French citizens are treated equally under the country's much-vaunted égalité, liberté, fraternité.

It is his inherent racism, I believe, which has made Macron basically declare war on Islam. This was not surprising. It is, in fact, a tactic used by the pro-Israel lobby to use the pliant media and politicians to demonise Muslim communities and thus divide society. In this case, it has been done to make the French think that their country and Israel share a common enemy in Islam and the so-called Muslim threat.

In many ways, Macron is also using this to divert attention from his domestic and international policy failures. His government is in trouble with a deteriorating economy. He can't create new employment opportunities or even preserve existing jobs. This has angered the French public, as was seen in last year's Yellow Vests movement demonstrations on the streets of France.

Overseas, Macron has failed in Syria, Libya and Lebanon, as well as his spat with Turkey, from which he reaped nothing but a further decline in his popularity. He thinks that he can escape this crisis by promoting the scarecrow of Islamic terrorism and exploiting European Islamophobia.

The Zionist lobby across the West has nurtured alliances with far-right politicians and demagogues to cast Europe's Muslims as a convenient scapegoat for their own shortcomings. This has been most noticeable in the European response to increased migration from the Middle East and Africa. A similar pattern has been seen in the US under Donald Trump, who has used racist rhetoric in his approach to immigration, especially from Muslim countries.

Rhetoric hostile to Islam and Muslims has been heard in Washington before of course. Following the fall of the Soviet Union, President Ronald Reagan is believed to have said, "We defeated the red and our next battle is against the green [Islam]." George W. Bush famously declared a crusade after 11 September 2001; it was a slip of the tongue, he apologised later. However, that "slip" did express Bush's approach, as he was allied with the extreme right and neoconservative Zionists, as well as the Zionist Evangelical Christians. He and those with him convinced the world that the problem lies in "Islamic terrorism" and he used the 9/11 destruction as a pretext for his war against Islam. Academics, writers and media professionals, including Samuel Huntington with his book The Clash of Civilisations and Francis Fukuyama with The End of History and the Last Man, have helped to entrench this position.

Islam has been portrayed as a brutal enemy by promoting a false image of Islam and Muslims, which not surprisingly has aroused fear in the West to the extent that it has almost become a self-fulfilling prophecy. The crimes committed against Muslims in the West are a result of these fears and the fruit of the hatred that has been planted in people's minds.

During the colonial era, anti-Islam discourse was used as a pretext to invade and dismantle the Ottoman Empire. The same mentality is being revived and emboldened today by the small-minded colonialist Macron. He is using it to unite Western powers against Muslims, hoping to lead the countries of Europe in their war against Islam and restore the glory of the French Empire. In other words, he wants to be re-elected and sees this as the way to attract votes from the far right. His real crisis has much more to do with his values, and those of the France that he espouses, than anything to do with Islam and Muslims.