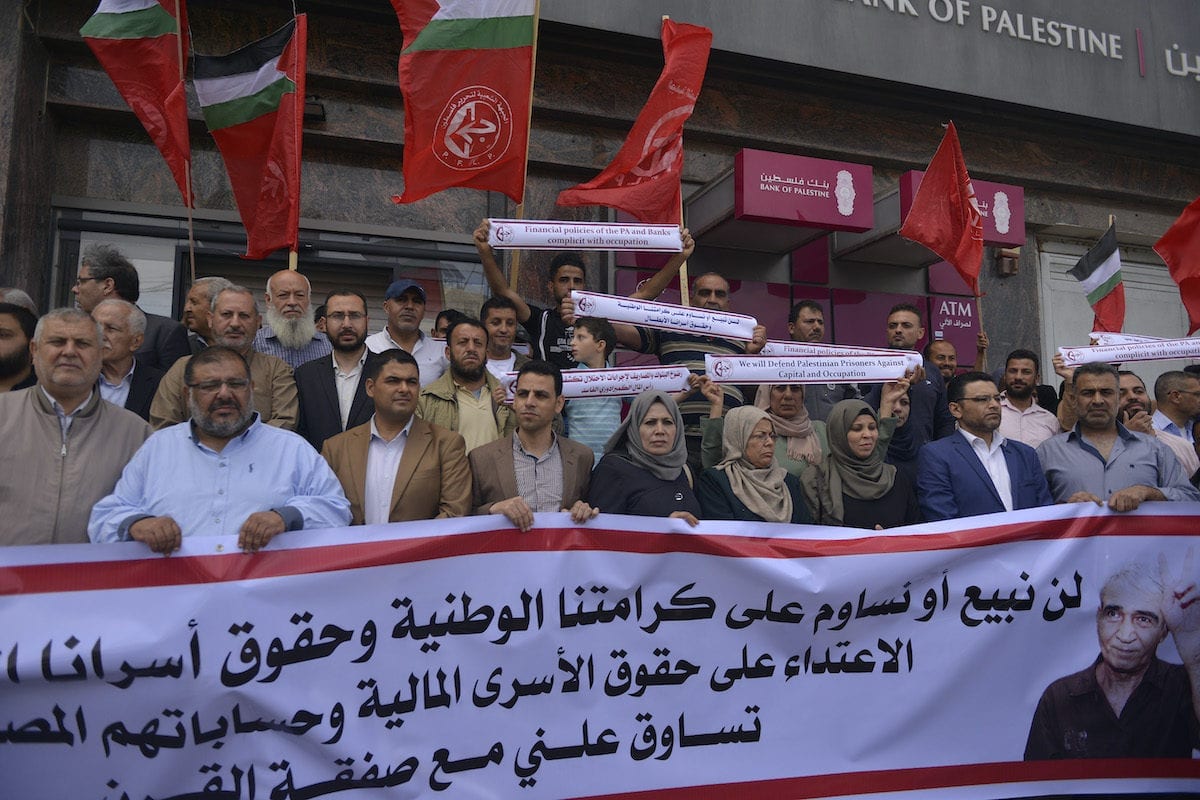 Protesters gather to protest the bank account closures of Palestinian prisoners in Israeli prisons in Gaza City, Gaza on 11 May 2020. [Mustafa Hassona - Anadolu Agency]
November 20, 2020 at 10:11 am

The Palestinian Authority is considering stopping paying stipends to Palestinian prisoners detained in Israeli jails as well as to the families of Palestinians who are killed by Israel, the New York Times reported.

The paper quoted Palestinian officials as saying that the PA is taking advice from sympathetic Democrats in a bid to improve its ties with the administration of President-elect Joe Biden.

The paper quoted the chairman of the Palestinian Authority's Prisoners Affairs Commission, Qadri Abu Bakr, as saying: "The proposal would give the families of Palestinian prisoners stipends based on their financial need instead of how long they are behind bars," adding that "economic need must serve as the basis. A single man should not be earning the same as someone with a family."

According to the official, the proposal needs the approval of Palestinian President, Mahmoud Abbas.

The former Palestinian Minister of Prisoners Affairs, Ashraf Al-Ajrami, said he expects the planned amendments to cause public anger, but acknowledged that the PA was eager to change the system because of the diplomatic toll it had taken.

READ: 400 Palestinian children detained by Israel since start of 2020

Meanwhile, Qassam Barghouti, the son of detained Fatah leader, Marwan Barghouti, slammed the amendments, describing them as "100 per cent unacceptable and shameful".

"The prisoners are not a social welfare issue," he told the paper. "People are paid more for spending longer periods of time in prison to recognise their sacrifices: The more time you spend behind bars, the greater your value to your society."

The paper quoted Palestinian officials as saying they also plan to require released prisoners to work in the public sector.

Abu Bakr told the paper that currently, many former prisoners are paid what amounts to monthly pensions for sitting idle. "We shouldn't be delivering salaries to people for doing nothing," he said.

The amendments will also include payments to the families of Palestinians who are murdered by Israelis.

The Palestinians officials said the PA intends to start strictly tying these payments to financial need, the details of how they would do so remain unclear.