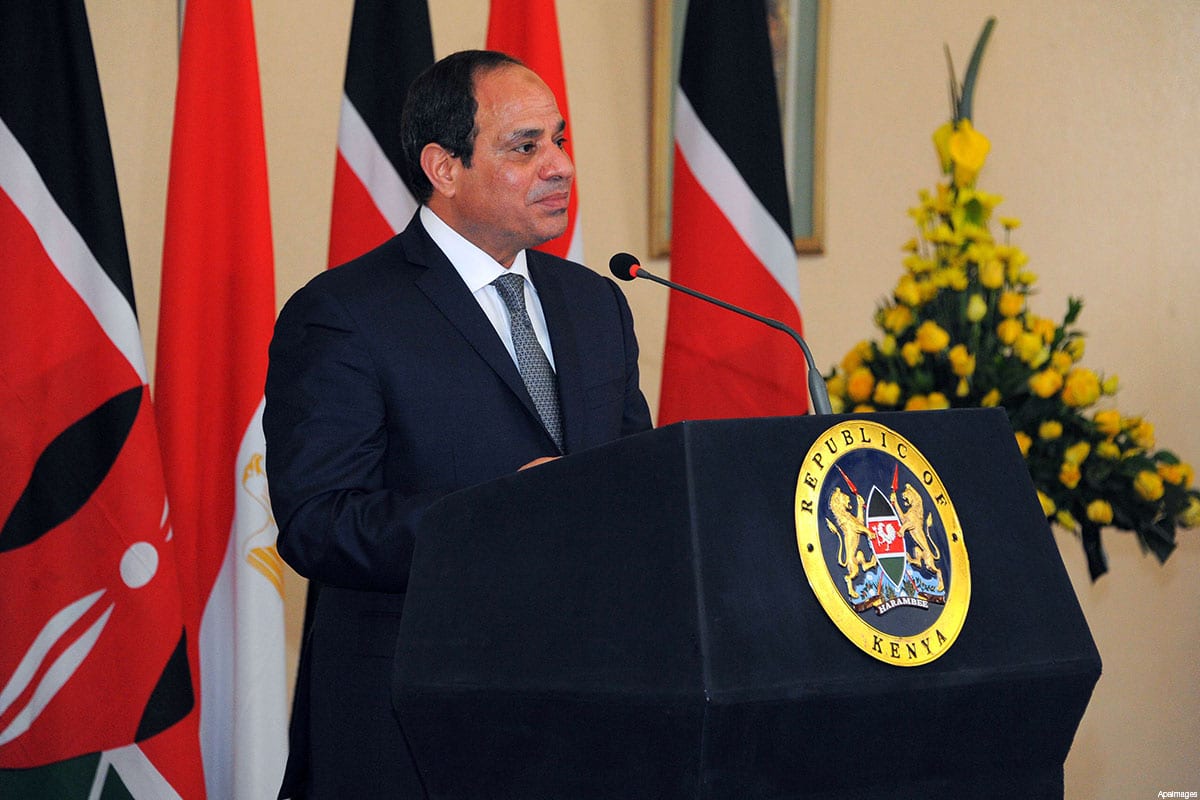 Egyptian President Abdel Fattah al-Sisi gives at a press conference at the State House in Nairobi, Kenya on February 18, 2017 [ApaImages]
February 26, 2017 at 1:22 pm

An Egyptian lawmaker started collecting signatures on Sunday for a motion to extend presidential terms and lift restrictions on re-election – a year before general-turned-president Abdel Fattah al-Sisi's first term is due to expire.

As defence minister, Sisi overthrew elected President Mohammed Morsi, a Muslim Brotherhood official, in mid-2013 following mass protests against his rule and launched a crackdown on the organisation and it's supporters.

Sisi, now 62, went on to win a presidential vote in 2014. He has not said whether he will seek re-election when his current term ends in 2018, but has made much of his popular mandate and promised to respect the will of Egyptians.

Sisi: Egyptians will not let me serve more than 4 years

The move by independent lawmaker Ismail Nasreddine to amend article 140 of the constitution would enable Sisi to stay in power longer than the two four-year terms currently permitted.

But the process is still at an early stage. Nasreddine, a low-profile lawmaker, will need the support of 20 percent of MPs to table a discussion on the issue in parliament.

"It will be the right of the president to nominate himself for the office as he wishes… and the right of the people to choose him or reject him," Nasreddine told reporters, adding that he would begin putting the idea to lawmakers on Sunday.

Even if he is able to push an amendment through parliament by the required two-thirds majority, the constitution also stipulates that any revision be approved by popular referendum.

Sisi has sought to roll back freedoms won during the 2011 uprising that ended Hosni Mubarak's 30-year rule, promising to restore stability to Egyptians fed up with years of political tumult.

The right to protest has been restricted while democracy and rights groups say they face growing government pressure and accuse Sisi of clamping down on political expression.

Egypt's last elections took place in late 2015, ushering in the first lawmakers since Morsi's parliament elected after the 2011 revolt was dissolved by a court in 2012.

The elections saw an electoral bloc loyal to Sisi sweep to victory. On the eve of those elections, the head of the pro-Sisi bloc, told Reuters loyalist lawmakers would likely seek to amend the constitution to further empower the presidency and scale back powers vested in parliament.

Egypt: Who's left in the army following the 2013 coup