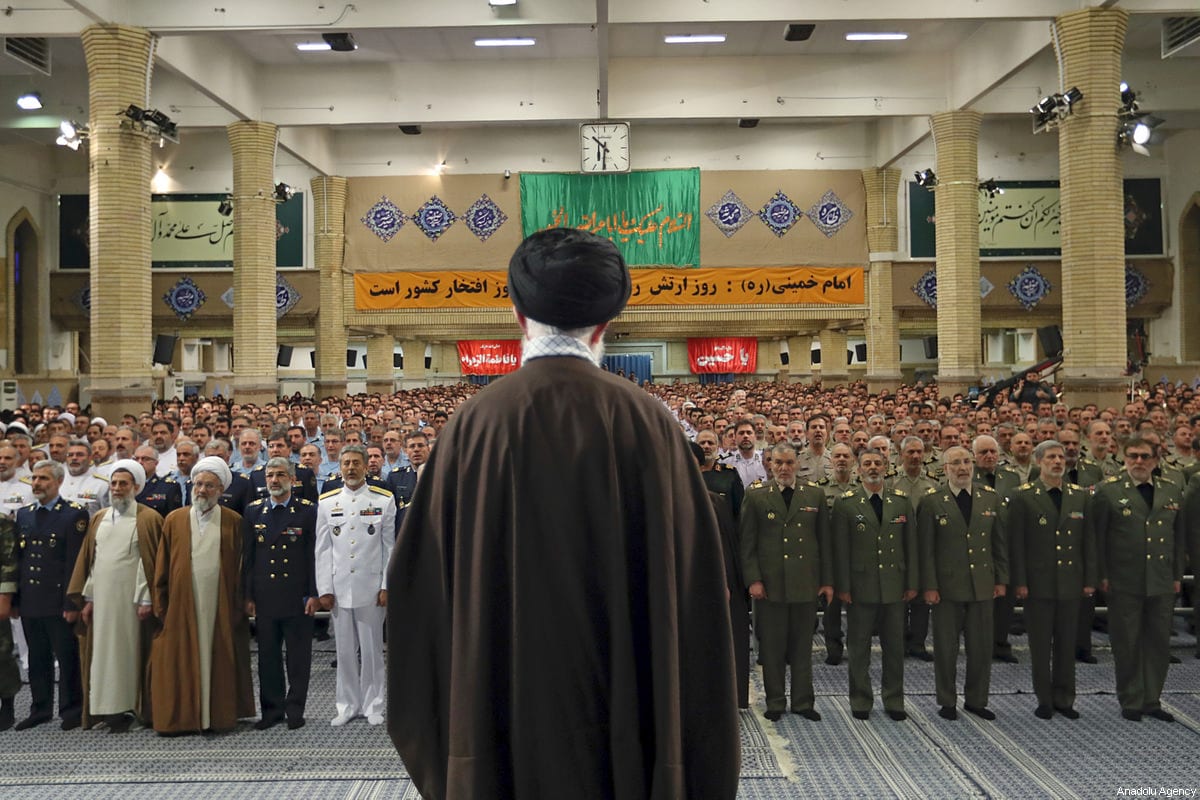 Supreme Leader of Iran, Ali Khamenei addresses the Iranian Army in Tehran, Iran on 19 April 2017 [Supreme Leader Press Office/Handout/Anadolu Agency]
May 3, 2017 at 11:53 am

Iran will continue to provide military advisers to the Syrian regime of President Bashar Al-Assad for as long as necessary in support of Al-Assad's forces, a senior commander in the Iranian Islamic Revolutionary Guard Corps (IRGC) was quoted as saying yesterday.

Iran has provided extensive military support to the Assad regime's forces since the start of the Syrian uprising against Al-Assad's Ba'athist regime, but initially did not comment publicly on its role. But as the military support increased and Iranian casualties also rose, officials began to speak more openly.

"The advisory help isn't only in the field of planning but also on techniques and tactics," Iran's state-backed Fars news agency quoted Mohammad Pakpour, head of the IRGC's ground forces, as saying. "And because of this the forces have to be present on the battlefield."

Read: Further US attacks on Syria will carry a high price, warns Iran

"We will continue our advisory help as long as they [the Assad regime] need it," he added.

An Iranian official said late last year that more than 1,000 Iranians had been killed in the Syrian civil war. These include a handful of senior commanders of the Revolutionary Guards, according to Iranian media reports.

Iran has helped to train, organise and transport tens of thousands of Shia jihadist militia fighters from Iraq, Afghanistan and Pakistan in the Syrian conflict. Fighters from Lebanon's Hezbollah are also working closely with Iranian military commanders in Syria.

Read: Differences between Russia and Turkey over Syria

Pakpour said the Revolutionary Guards' ground forces were in Syria to help the Quds Force, the branch of the Guards responsible for operations outside of Iran's own borders.

There is very close coordination between the Syrian army and the Revolutionary Guards advisers,

Iran and Russia are Al-Assad's main allies in the conflict, while the United States, Turkey, Saudi Arabia and other Gulf Arab states support opposition groups seeking to overthrow him. Most analysts believe that, without early Iranian support, Al-Assad would have met the same fate as other leaders toppled by the Arab Spring, including Libyan despot Muammar Gaddafi who was killed in 2011.