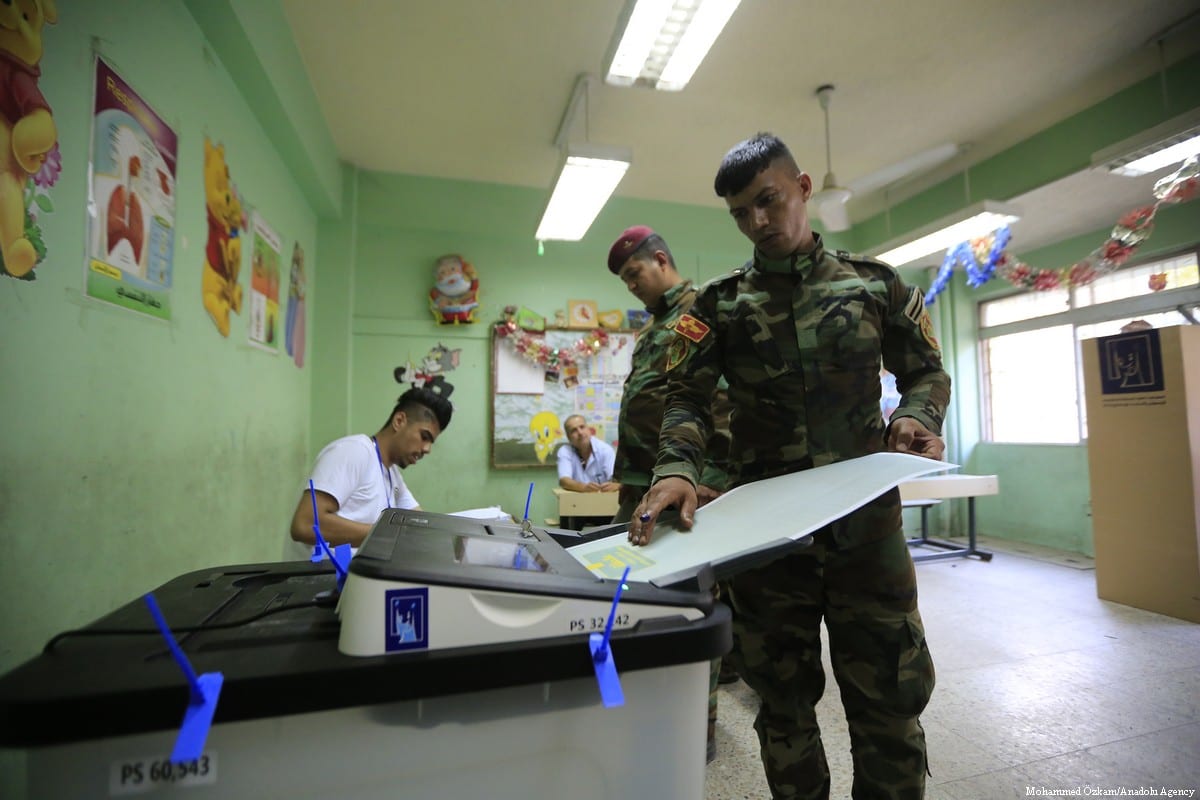 Iraqi security forces cast their vote during the Iraqi parliamentary election in Baghdad, Iraq on 10 May 2018 [Murtadha Sudani/Anadolu Agency]

With less than 24 hours to go before Iraqis cast their votes in their country's fourth parliamentary elections, people on the street are divided on whether to take part or abstain. Perhaps more than any other age-group, disillusion runs highest among Iraqi youth.

Those aged 25 and below are accustomed to stories about Iraqi triumphs, yet the majority have only known post-2003 Iraq, and the failures of its ethno-sectarian political system. Iraqis from older generations show similar disillusionment, including those sitting on the fence who may have voted in the past but whose faith in change has broken down since Iraq's previous election in 2014. Their reasoning is the same, though; the state's litany of failures and bleak prospects for positive change.

Ambivalence stretches beyond Iraq, creeping into wherever Iraqi communities have resettled. Online campaigns have been mushrooming to reflect this growing sentiment and to urge people to boycott the polls.

The position of Iraq's highest Shia religious authority, Ayatollah Ali Al-Sistani, has been interpreted in a number of ways. Some feel his edicts encourage participation, while others have focused his calls to preserve the status of Iraq's victory against Daesh, which requires Iraq's Popular Mobilisation Forces to stay out of the race.

One man at the heart of renewed calls for an electoral boycott is Shia cleric and spiritual leader Sheikh Jawad Al-Khalisi. The renewal of this stance has invited a storm of controversy and not for the first time. Khalisi is a figure well known for his involvement in the resistance movement against America's occupation of his country. He remains influential locally in the predominantly Shia Baghdad suburb of Kadhamiya, but in politics his influence is marginal at best.

The light that has been shone on the cleric's unforgiving stance is confined primarily to Iraqi and Arabic media outlets. His message to eligible voters, political and religious parties and candidates is clear-cut. Elections, he argues, are fraudulent and deceptive, to which "the majority of Iraqis stand opposed."

Khalisi has lambasted the presiding political elite for exercising what he deems "the most severe forms of terror […] political and administrative corruption" ushered in by the invasion that transformed the country beyond recognition. He described this as "the greatest sin" in a sermon delivered in late March, and called on Iraq's extant intelligentsia to assume its duty to repair the country away from "the ballots of falsehood and deception."

Although it is almost impossible to determine with surgical accuracy how well coordinated the campaign for an election boycott has been, boycott fever is rising. Popular hashtags include #stayhome, #won'tvote, #boycottelections and other variations of the same message.

Diminished hopes, disenfranchised classes, military priorities and Iraq's investment-obsessed economy are a few of the reasons that boycotters use to explain their position. Politicians are alarmed and often counter these efforts with reassurances that are mocked habitually by Iraqis.

A boycott will not prevent a government from being formed, but it does inform parliament that its formation, if successful, will lack popular approval. Equally, it deals a blow to small political parties, for the fewer votes that they can attract, the fewer parliamentary seats there will be for mid-level candidates.

Of course, Khalisi has not been alone in calling for a boycott. In February, Iraq's Kurdish Democratic Party voiced its own threat to boycott the election, in a manoeuvre intended to deprive rival candidates of securing a greater number of seats. This is explicitly the case in Kirkuk, which Iraqi forces reclaimed after the Kurdish leadership violated the terms of its power-sharing agreement with Baghdad by pressing ahead with a vote on Kurdish independence. The KDP blames the Patriotic Union of Kurdistan (PUK) for the loss of Kirkuk, once a PUK stronghold. Whereas the KDP did not follow through with its boycott threat, Khalisi's position has been nothing but consistent.

Motives for boycotting can differ, but all lead to the same outcome, with a scenario that denies legitimacy to future parliaments and political parties, big and small. A boycott can also, in many ways, be a moral decision. By abstaining, Iraqis are choosing to stand apart from the corrupt world of politics, which is the image to which their country has been reduced.

The people do not want to be judged by an authority that does act in the public interest. While the prevalent "we want nothing to do with it" attitude does not reflect the position of every Iraqi, it is louder than it has ever been in previous election campaigns.