Iraqi populist leader Muqtada Al-Sadr's climb to fame has eclipsed the predictions of his inevitable demise heard over the past decade. Once described as an afterthought in the celebrated Sadr family's long line of revered scholars, his rise is as much a surprise today as it was in 2003 in the context of America's invasion and occupation of Iraq.

At the time that US and multinational troops started to occupy strategic areas across the country, Muqtada Al-Sadr, despite his tender age, evolved quickly into an unpopular and troublesome figure that neither America nor the government it appointed could tame. The resistance that he led against US forces went unpunished for incidents that resulted in the deaths of American and British military personnel. Jaysh Al-Mahdi, the militia he raised to fight the occupation, lives on, albeit splintered into smaller paramilitary clusters, one of which — Saraya Al-Salam (the Peace Brigade) — is commanded directly by Sadr today.

The backing that he received from male citizens without jobs and other resistance factions to a lesser extent, was related less to what Sadr represented and more about ordinary citizens and their desire to fight invading troops. To them must be added others concerned with honouring the sacrifices by Sadr's father and father-in-law, Mohammed Sadiq Al-Sadr and Muhammad Baqir Al-Sadr, both of whom were executed by the Saddam Hussein regime. This much was recognised by the US State Department's Bureau of Intelligence and Research in a report published in July 2004: "Even if Sadr fails in his bid for a substantial political role, the Sadr constituency probably will remain a factor."

READ: Iraq's Sadr to form government of technocrats in Iraq

This is no longer a prediction but a stubborn fact for the leading figures in Iraq's political process, the US and Iran. Few, though, made this distinction in their attempts to decipher the reversal of Sadr's fortunes. His Sairoon alliance with communist and secular civil society groups, however unholy Sadr's Islamist counterparts think it is, was an important factor.

The popularity that the youngest Sadr has gained over the years has offered up a shield of protection, and seen him pardoned for his alleged involvement in the murder of prominent Shia cleric Abdul Majid Al-Khoei and for stirring up anti-occupation activities and sentiments. Yet many of these details have vanished from recently published accounts concerning themselves with the Communist-Sadrist election achievement and Sadr's ability to govern the county. Still, his belligerence, capricious mindset and double-dealings remain fresh in the minds of many Iraqis and Iraq's strongest allies.

Despite choosing to rebel against the occupying forces in 2003, Sadr eventually entered the political fold. He still owes his ascendancy in large part to the aides and advisors who served the Sadrist movement loyally even before Muqtada entered the picture. Iran also offered financial support over the years as well as sanctuary in 2008; Sadr lived there in self-imposed exile until 2011.

READ: Democracy has taken a leap forward in Iraq

Facing difficulties qualifying as an Ayatollah, Sadr's return to Iraq in 2011 coincided with the earliest phase of Iraq's spring movement, echoing the discontent heard in Egypt and Tunisia. He attached himself craftily to the "Iraqi Spring" movement and bought time for the then Prime Minister Nouri Al-Maliki, against whom protesters rallied, by offering up a 100 day extension to reform the country. The deadline elapsed and, to date, no reforms have ever been implemented.

In subsequent years, the Sadrist movement has continued to exert influence within Iraqi politics, participating in national elections and populating the ranks of parliament with its men. Many still doubt that Sadr has shown himself willing to cede power by accepting a marginal role in politics. Indeed, some analysts expect a similar scenario once negotiations led by Iranian Revolution Corps Commander Qassem Soleimani conclude in Baghdad. 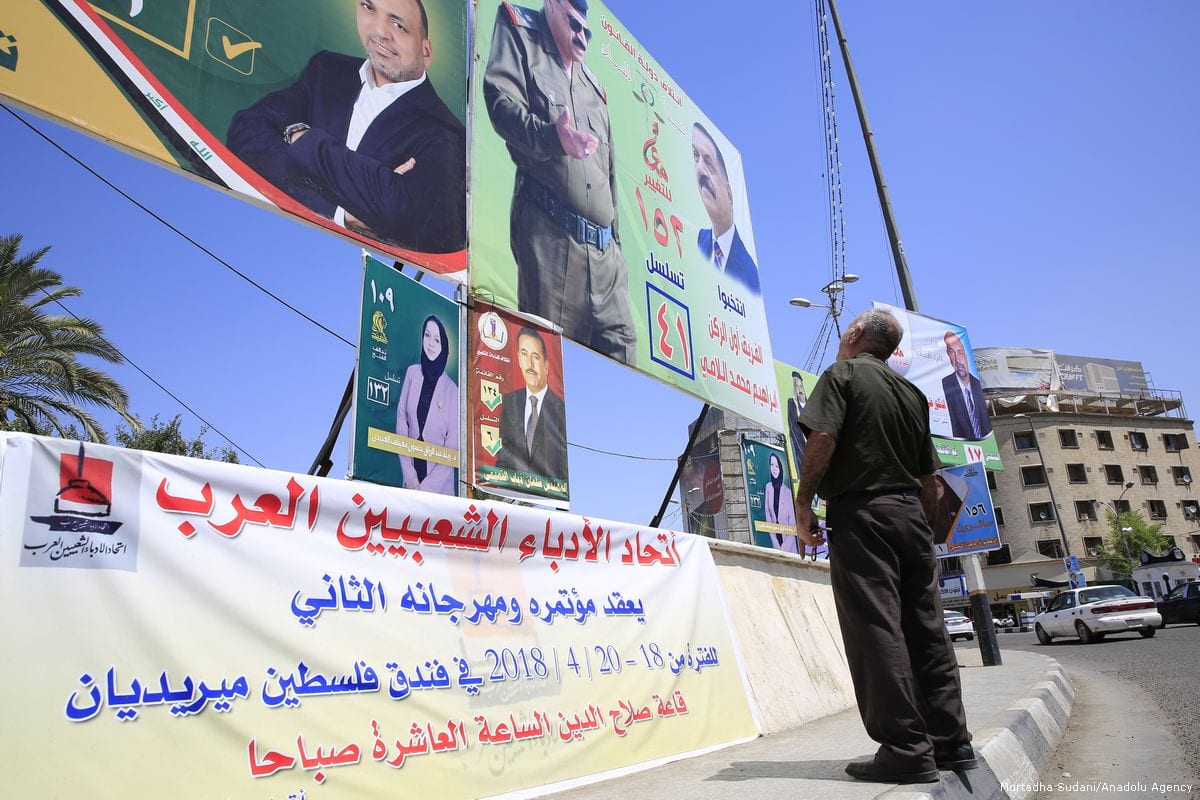 An Iraqi man looks at the candidates' electoral campaign posters ahead of the parliamentary elections, in Baghdad, Iraq on 17 April 2018 [Murtadha Sudani/Anadolu Agency]

Following his fallout with Iranian-backed Asaib Ahl Al-Haq militia commander Qais Al-Khazali, Sadr has remoulded his militia into a political organisation. Political gains made by the Sadrist movement have given him a golden opportunity to exploit his party's well-placed position to outmanoeuvre other actors. It is yet to be seen whether Sadr will receive the approval needed to form a government with either US-favoured Haider Al-Abadi or Iran-backed Hadi Al-Ameri.

The opportunities available to Sadr also correspond to the changing vocabulary used by analysts and journalists to describe him; he's a firebrand turned maverick, and now a nationalist. They also seem unable to agree on the type of cleric he is — "radical or moderate" — or whether it suffices to call him an "Islamist or Shia".

In his latest regeneration, between 2012 and now, the icon of Sadr himself has become inseparable from the larger protest movement in Iraq. When his supporters stormed parliament in April 2016, the next logical move would have been a coup but it never transpired. Perhaps the movement was operating within restricted parameters to set the stage for Sadr's newest partnership with civil society actors and communists that helped him gain 54 seats in Iraq's parliamentary elections last week.

A Muqtada Al-Sadr premiership is unlikely but not impossible if America chooses to forgive and forget. The mindset prevalent in Washington today echoes the concerns outlined in a memo sent by Paul Bremer sent to Donald Rumsfeld in 2004: "Stability is the sine qua non of our success in the region. The challenge posed by Muqtada al Sadr now dominates the political and security situation in our region's Shiite provinces and directly threatens the success of our mission."

The passage of time appears to have altered very little in this respect, and the changing vocabulary used to reinvent the figure of Muqtada Al-Sadr have yet to convince the majority of Iraqis of his ability to heal the country. He has been part and parcel of the system, often criticising the world around him, yet absolving himself of any responsibility. He certainly has had a less than conventional journey into politics.