It is less than a year since Trump recognised Jerusalem as the capital of Israel and moved the US Embassy to the city
April 1, 2019 at 2:28 pm | Published in: Article, Asia & Americas, Israel, Middle East, Opinion, Palestine, Syria, US

The tweet posted by US President Donald Trump about the Golan Heights was unlike the others he posts for fun every morning. He said what he was going to do, but the Arabs were asleep. They did not know or care about his intentions, which were transformed in less than a week into a presidential decree recognising Israeli sovereignty over the Syrian territory and regarding it as part of Israel.

Trump's decision not only preserves the status quo and legitimises Israel's occupation, but is also tantamount to declaring war on international norms, represented by the UN and international law. At a stroke he has imposed the law of the jungle on the Middle East and its people.

It is a null and void decision by any standard, because it violates the UN Charter, which states: "All Members shall refrain in their international relations from the threat or use of force against the territorial integrity or political independence of any state, or in any other manner inconsistent with the Purposes of the United Nations."

The US decision also violates several UN resolutions, foremost of which is Resolution 242, which stipulates the "withdrawal of Israel's armed forces from territories occupied in the recent conflict," a reference to the territories occupied in 1967, including the Syrian Golan Heights. It also violates Resolution 497 of 1981, in which the UN decided that, "the Israeli decision to impose its laws, jurisdiction and administration in the occupied Syrian Golan Heights is null and void and without international legal effect."

The countries of the free world today are facing an important and fateful test. Will they accept Trump's policy of bullying and agree to the law of the jungle imposed by him on the rest of us? To do so would be to drag the world back into the Dark Ages, with countries occupied and their people subjugated — or worse — by force

It is less than a year since Trump recognised Jerusalem as the capital of Israel and moved the US Embassy to the city. Before making that move, he posted similar tweets hinting at his intentions. The US President is not crazy, as some believe. He may be foolish, but he is not stupid. He is aware of what he is doing and saying, and thinking like a businessman. He weighs all his decisions on profit and loss, deals and bargains. We saw this clearly in his relationship with Saudi Arabia and how he was able to "milk" the Kingdom of millions of dollars.

The words of a man with such a personality should be taken seriously and not underestimated. However, he knew that there would be no official or popular Arab reaction, so he implemented his decision in full confidence, disregarding all international charters and the rights of the Arab nations, which Trump obviously despises, including their leaders. He would not have been able to make his move until he saw the hesitant Arab reaction and the leaders' silence in the face of his recognition of Jerusalem. This encouraged him to dispose of yet more Arab land.

His intention to recognise Israeli sovereignty over the Golan Heights was clear as soon as he posted that fateful tweet. Despite this, the Arab League took no action, as it is preoccupied with outlawing the Muslim Brotherhood and Hamas as "terrorist" organisations. Instead, the League merely issued a disappointingly weak statement when a firm position was called for that hinted at adopting new policies and measures which challenge US interests in the region. It did not do this, though and will not do it given the dependency policy adopted by the Arab governments.

Even the Syrian regime, which is concerned directly with the matter, took no action to prove or reinforce its sovereignty over the Golan Heights. It did not even insist that it reserves the right to respond in a timely manner, which is what it says whenever the Israeli air force bombs Damascus.

All of the Arab governments remained silent, leaving Turkish President Recep Tayyip Erdogan to be the only person of such status who slammed Trump's move. "Under UN resolutions, Israel cannot lay claim on even a small bit of the Golan Heights," explained Erdogan. "US President Donald Trump's statement on Israeli sovereignty over the Golan Heights has brought the region to the edge of a new crisis. We will never allow, and cannot allow, the legitimisation of the occupation of the Golan Heights."

Everyone's indifference makes me wonder if something was cooked up behind the scenes of the Zionist administration in Washington. This is especially so following US Secretary of State Mike Pompeo's strange statement a week ago that it was possible that President Donald Trump was sent by God to save Israel from Iran.

We should, therefore, expect more earth-shattering surprises from this "divine envoy", as he gives land to whoever he wants and takes from whoever he wants. Trump is, remember, on the verge of announcing the "deal of the century". I am certain that the Golan Heights will be part of the deal, which will stipulate that the territory must be recognised internationally as Israeli land. Who knows what other Arab territories Trump will steal and gift to Israel? It could be land that Israel was forced to withdraw from in accordance with peace treaties. There is nothing stopping the Zionists in Israel and Washington from annexing the West Bank or South Sinai under the law of the jungle, imposed by Trump and condoned by the silence of the Arabs.

Nevertheless, it seems that Trump does not know that the Arab people cling to their land and that over centuries of conflict and struggle no colonial power has been able to take a country from its people and give it to others. Israel, which was founded on land stolen from the Palestinians, will not last long; it will be just like all the other colonial powers that tried to steal our land. They all went to hell and our countries remained ours. 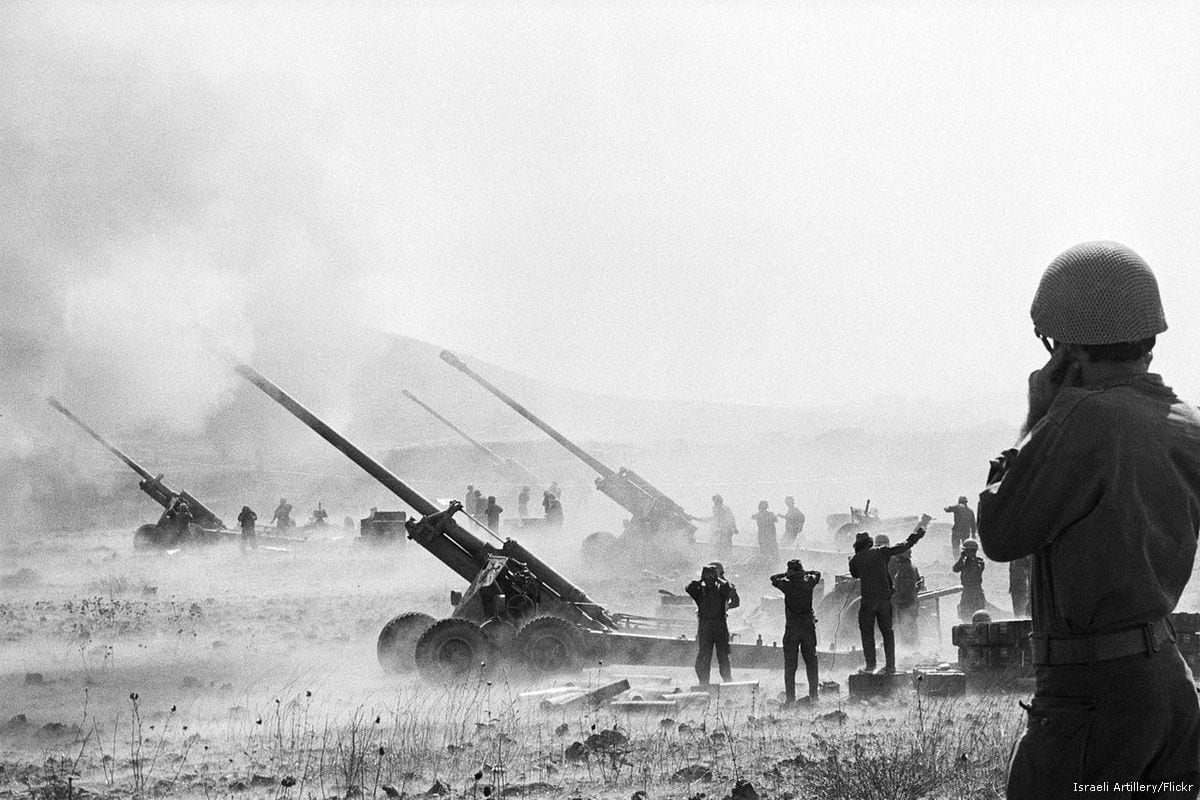 It is worth recalling that since the end of the October 1973 war, not one bullet has ever been fired by the so-called Syrian Arab Army at the Israeli occupation troops stationed in the occupied Golan Heights. The Syrian regime was not provoked by the Israeli flag raised on the territory's highest point. Instead, the only shots fired have been aimed at the Syrian people, as if their army is acting as the guardian of Israel's border. The regime then has the gall to claim that it is part of the axis of resistance and chant slogans about fighting Israel.

Much has been said about the scandalous fall of the Golan Heights in the 1967 war and that the land was handed to Israel on a platter. This has been mentioned by many soldiers who fought in the battle, and in the testimonies of officers and officials who were in close contact with Hafez Al-Assad, the Defence Minister at the time, which appeared in documentaries, such as the one produced by Al-Jazeera. They all agreed that the current Syrian President's father announced the fall of Quneitra 17 hours before the Israeli army entered the city, and that the Syrian officers withdrew from their positions, leaving their troops without commanders. Orders were then issued to withdraw and leave the land open to the enemy. This is all well documented.

It is actually claimed that the Golan Heights was sold to Israel by Hafez Al-Assad. One person to make this claim is Dr Mahmoud Jame', a personal friend of the late Egyptian President Anwar Sadat, who said that Israel wrote a cheque for $100 million to Hafez Al-Assad and his brother Rifaat, which they deposited into Swiss bank accounts. Jame' claimed that the cheque number is located in former President Gamal Abdel Nasser's safe. This would explain why Israel managed to annex the Golan Heights in 1981 without any state recognising this move. Israel claims that the Golan is part of the Promised Land, which is why it imposed Israeli citizenship on its Arab inhabitants and rejected any negotiations to withdraw to the pre-1967 border.

Whether the Golan Heights was sold for money or a guarantee of the presidency for Hafez Al-Assad, or both, is not really the issue. Either way, the betrayal is clear. The result was Israel's occupation of the Golan Heights and Hafez Al-Assad becoming president after his military coup against President Nureddin Al-Atassi in 1971.

The question now being asked is whether the Syrian son has followed in his father's footsteps; did the murderous criminal Bashar Al-Assad relinquish the Golan Heights as part of a deal stay on as Syria's President? Recent leaks in the press speak of secret Israeli negotiations with him to give up the Golan Heights in exchange for staying in power. I believe that this is a very likely scenario, and that it is this which encouraged Trump to make his sudden announcement about recognising Israeli sovereignty over the Golan Heights.