The pro-Israel lobby is on the decline; let's help it on its way 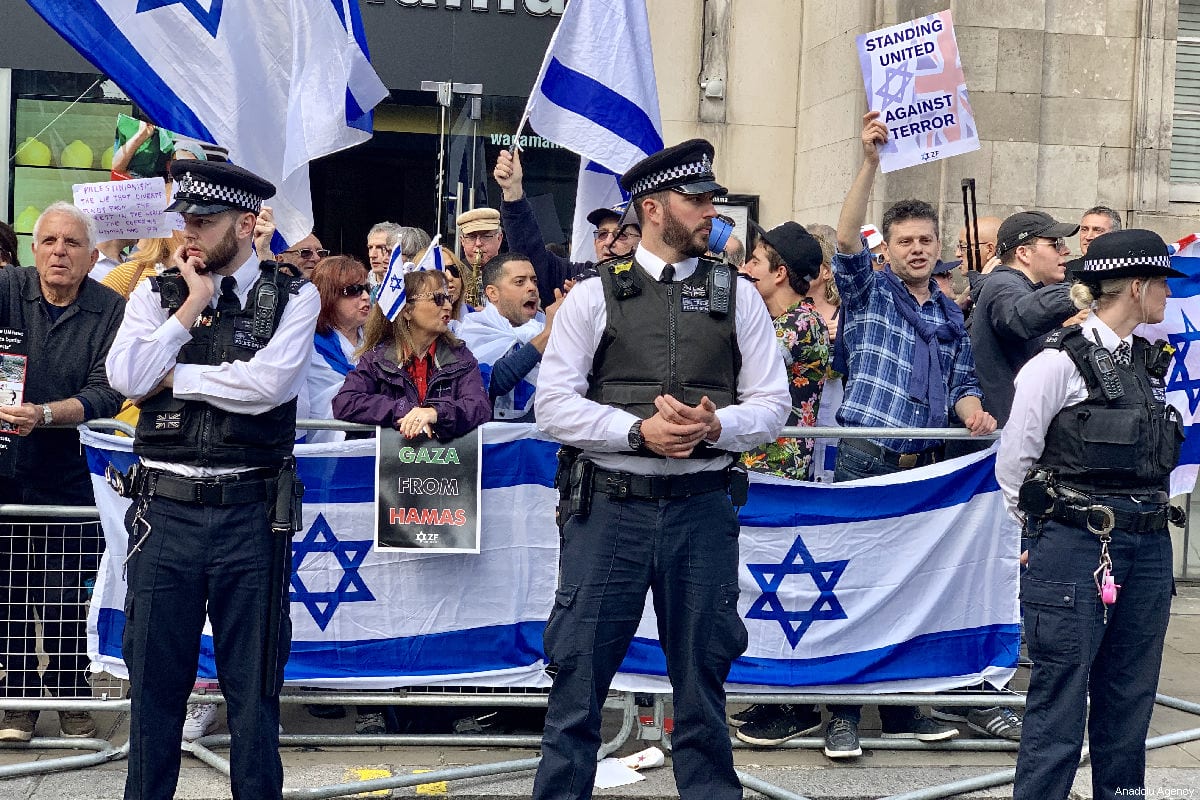 A small group holding Israeli flags were holding a counter protest as hundreds of protesters gather in front of the Israeli Embassy in central London in solidarity with Palestinian people in London, United Kingdom on 30 March 2019 [Hasan Esen/Anadolu Agency]

A lot has been written about the pro-Israel, anti-Palestinian lobby over the years. Many take the view that the US and Britain have their foreign policy dictated to them by Israel and its influential lobby groups in the West.

I don't intend to revisit the whole debate over the lobby in this column, but I've written before about how I consider this to be an inaccurate view, born of an essentially conservative worldview. It is a view that starts with the assumption that American and British foreign policies are essentially benign, and that the pro-Israel lobby has somehow corrupted them.

On the other hand, there are those on the left who hold to the equally mistaken view that to even use the term "pro-Israel lobby" is a conspiracy theory or (even more outrageously) anti-Semitic. This is, quite plainly, nonsense.

Many countries have powerful, well-funded and impressively connected lobbies working to promote their interests in Western capitals. Israel is no different in that regard. The pro-Israel lobby obviously exists, is well-funded, and has a significant impact on British political life.

Historically, however, the influence of the pro-Israel lobby is on the wane. It is a slow process for sure, and the lobby is certainly not be written off yet. But for those like myself who follow the activities of the lobby for a living, the general trend is plain to see.

READ: Why is a right-wing Israeli group coming to London to advocate destroying Palestinian lives?

Witness, for example, 2017's documentary The Lobby by Al Jazeera. In this superb undercover investigation, we saw plainly that the lobby is still a force to reckon with. Most infamously, Israeli Embassy agent Shai Masot told ex-Labour, and now ex-MP, Joan Ryan — she was the chairperson of Labour Friends of Israel at the time — that she could partake in the "more than £1 million" worth of funding for junkets to Israel. Ryan stated that her group had put names forward for the embassy to consider.

At the time the film was made, these names seemed most likely to have been MPs, since LFI is quite well known for taking lawmakers on propaganda trips to Israel. Earlier this year, though – more than two years after the film aired — LFI denied this, stating that the funding was for trips for "young people" to go to Israel; the lobby group was probably hoping to influence future MPs. Either way, the money represented blatant interference in the British political system by a state which is extremely hostile to the opposition Labour Party, which was at the time Ryan's own party, remember.

However, the Al Jazeera film contained another key scene. Shai Masot, its main antagonist, admitted to Al Jazeera's undercover reporter that the pro-Israel lobby is in stark decline in Britain. Unlike in previous years, when almost every Labour MP would join Labour Friends of Israel, they are no longer doing that, he lamented. Conservative Friends of Israel has no such problem, apparently, but LFI seems to be in almost terminal decline. It no longer has stalls at the annual Labour Party conference, thanks mainly to the scrutiny that Al Jazeera's film brought to bear and the growing awareness among normal Labour Party members of LFI's insidious role.

And now some MPs are being to jump from the sinking LFI ship. Not enough, by any means, but it is a start.

There were also revealing comments about the declining role of the pro-Israel lobby in a second undercover Al Jazeera investigation focusing on America. The Lobby – USA was completed and cleared fully through all legal vetting, but it was censored by Al Jazeera's owner, the state of Qatar, after it came under immense pressure by the very same lobby that the film exposed.

However, The Electronic Intifada was able to obtain and publish the entire film, making it free for anybody to view online. It contains many revelations about how the pro-Israel lobby operates and what makes it tick. There were two comments in the film, though, which particular stuck with me.

The first came from Jonathan Schanzer, of the Foundation for Defence of Democracies: "Anti-Semitism as a smear is not what it used to be," he was caught admitting. The lobby constantly defames Palestinians and their supporters as motivated by racism against Jews, so it's actually refreshing to see one of the lobby admit – albeit in private – that they cynically abuse the issue as a "smear" campaign.

Secondly, and most ominously for the lobby, a former lobbyist for the American Israel Public Affairs Committee, AIPAC, said that, "The foundation that AIPAC sat on is rotting." This was a recognition by Eric Gallagher of the historical trends at play right now.

The influence of AIPAC and other pro-Israel lobby groups is on the wane because Israel itself is becoming more of a partisan party political issue, rather than the bi-partisan consensus issue that it far too often was for politicians in the past. In other words, you are far more likely to support Israel if you are a Trump voter or a Boris Johnson voter, than if you are a Bernie Sanders or a Jeremy Corbyn voter.

Our role, then, as people in support of justice for the Palestinian people, should be to accelerate these historical trends, expose the hypocrisy and never give up. If the pro-Israel, anti-Palestinian lobby is on the decline, let us all help it on its way.

READ: Israel tries to hide its crimes by shooting journalists