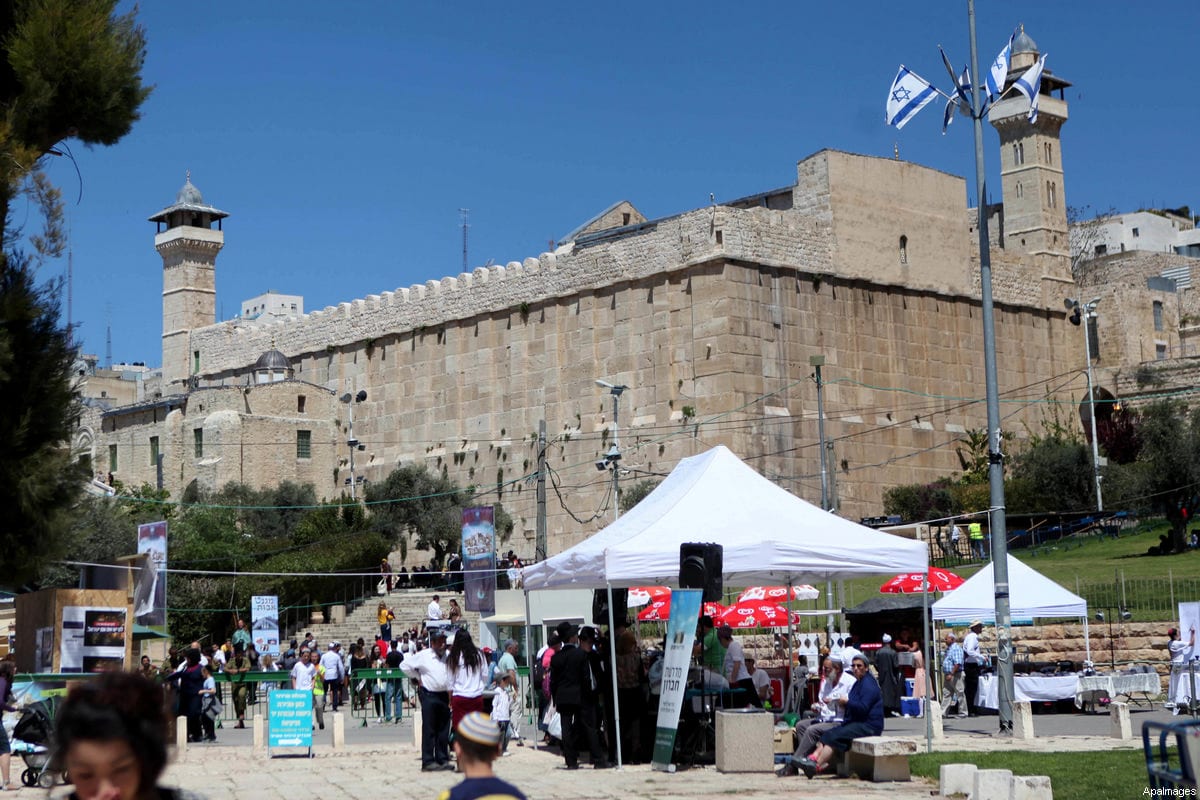 Israelis walk outside the Ibrahimi Mosque, also called the Tomb of the Patriarchs, during the Jewish Passover holiday, in the West Bank city of Hebron, April 5, 2015 [Mamoun Wazwaz / ApaImages]
December 21, 2019 at 2:20 pm

The Israeli Ministry of Public Security released to the public on 19 December the report which laid the basis for the expulsion of the Temporary International Presence in Hebron (TIPH), earlier this year.

The original document was issued by the Israeli police on 17 January, at the request of the minister of public security, Gilad Erdan, to document TIPH activities. This laid the groundwork for Prime Minister Benjamin Netanyahu's decision, on 28 January, to go against an internationally signed treaty and not renew the TIPH mandate.

The dismal three-page document outlined a weak analysis of TIPH's activities, with vague and baseless claims, leading a number of activist groups to believe that the move by Netanyahu to not renew the mandate was purely politically motivated.

"It is proof that all the claims [made by] settlers in Hebron related to security [are] false," exclaimed Issa Amro, Hebron native and founder of the Palestinian-led grassroots group, Youth Against Settlements (YAS).

The Israeli activist group, Peace Now, was able to bring the police report to light through a lengthy legal battle with the Movement for Freedom of Information, and reported that the police document is nothing but "a superficial report with no real findings."

Despite years of settlers claiming TIPH harassment and violence toward them, the Peace Now report highlighted only three "exceptional events" – all of which involved settlers attacking TIPH observers. In only one event does the police report claim an observer retaliated against an attack, by slapping a child.

"The prime minister took… this dramatic decision [of expelling TIPH] when the basis for it was actually nothing," Peace Now member, Hagit Ofran, expressed to MEMO. "You would imagine – like what settlers said, what soldiers said – that the observers are harassing the settlers, harassing the army, creating 'friction'… and then you read the report and there's nothing."

The police document ended with vague "insights" which the Peace Now analysis found baseless. For example, the document claimed that "frictions" were reported daily, yet this was not forwarded to the Israeli police, so they didn't have any details on them. The document also claimed that observers were "highly paid" thus "highly motivated" to issue a large number for reports, and that Palestinians "exploited" TIPH and gave them "false complaints".

"There is not much into the decision [to expel TIPH] except for the pressure of the settlers and, maybe, that they don't like the reports," Ofran speculated, adding that the TIPH reports were classified, so it would be impossible for the reports alone to cause any indicated "friction" in Hebron.

To Amro, the released police document is "evidence that everything is happening according to a political agenda" in Hebron which includes, but is not limited to, "the quiet transfer" of Palestinians from their homes, the annexation of Hebron to Israel and the hushing of criticisms against Israel for any human rights violations.

Hebron is a city that witnesses a lot of "friction" as the only West Bank city that is itself occupied and settled in. Since the 1997 Hebron Protocol was signed between Israel and the Palestine Liberation Organisation (PLO), the city was divided into two areas: H1 being Palestinian-controlled and H2 being Israeli military controlled.

H2 constitutes a great portion of the Old City, and is home to roughly 34,000 Palestinians and 700 Israeli settlers, according to the human rights group, B'Tselem. Nearly 7,000 Palestinians live in close proximity to settler enclaves in H2, which creates a lot of tension.

A primary function of TIPH, along with the various monitoring groups also present in Hebron, is to help alleviate tensions merely with their presence.

Christian Peacemaker Teams (CPT) is one group that has been operating in Hebron since 1995, and remains until today, albeit with a lot more difficulty now with the absence of TIPH. "What we have traditionally always done is accompany children to school. That's the biggest thing," one CPT volunteer informed MEMO, who served three months in Hebron earlier this year and wished to remain anonymous. He explained how Palestinian children were escorted to school to thwart settler attacks or soldier harassment, which is commonplace in H2.

The CPT volunteer expressed that since the expulsion of TIPH, other monitoring groups or international volunteers are being targeted. "There has been a drastic increase in the number of passport checks that we've had to go through," which causes great fear in volunteers, he explained, who are routinely denied re-entry into the country if their work in Hebron is discovered. "It seems like all they want us to do is become afraid of them. It's an intimidation tactic," he expressed.

YAS stepped in as local volunteer observers and escorts, shortly after the expulsion of TIPH, but were met with violence from both settlers and soldiers, with some volunteers being detained. "The space on the ground is shrinking for local or international observers to operate," YAS leader Amro expressed to MEMO. "We don't have any institution or body to call when we are harassed, attacked or detained" now with TIPH gone, he exclaimed.

TIPH was officially established as a part of the 1997 Hebron Protocol, as a team of international observers from Norway, Italy, Sweden, Denmark, Turkey and Switzerland, who would oversee violations of human rights in the city and ensure the implementation of the agreement. Every six months, both parties were required to renew the TIPH mandate.

In a damning report published by Haaretz exactly one year ago, the confidential TIPH reports – which only the Israeli, Palestinian and cooperating countries' authorities have access to – indicated at least 40,000 incidents against Israel's actions in Hebron, over the last 20 years of monitoring.

"Ultimately, the result of the removal of observers from Hebron, which violates an international agreement signed by Israel," the Peace Now report indicated, "in fact harmed Israel's image and now serves as proof that Israel has something to hide in its conduct in Hebron."

My life in Hebron: 'I dream of a day when there are no settlements'