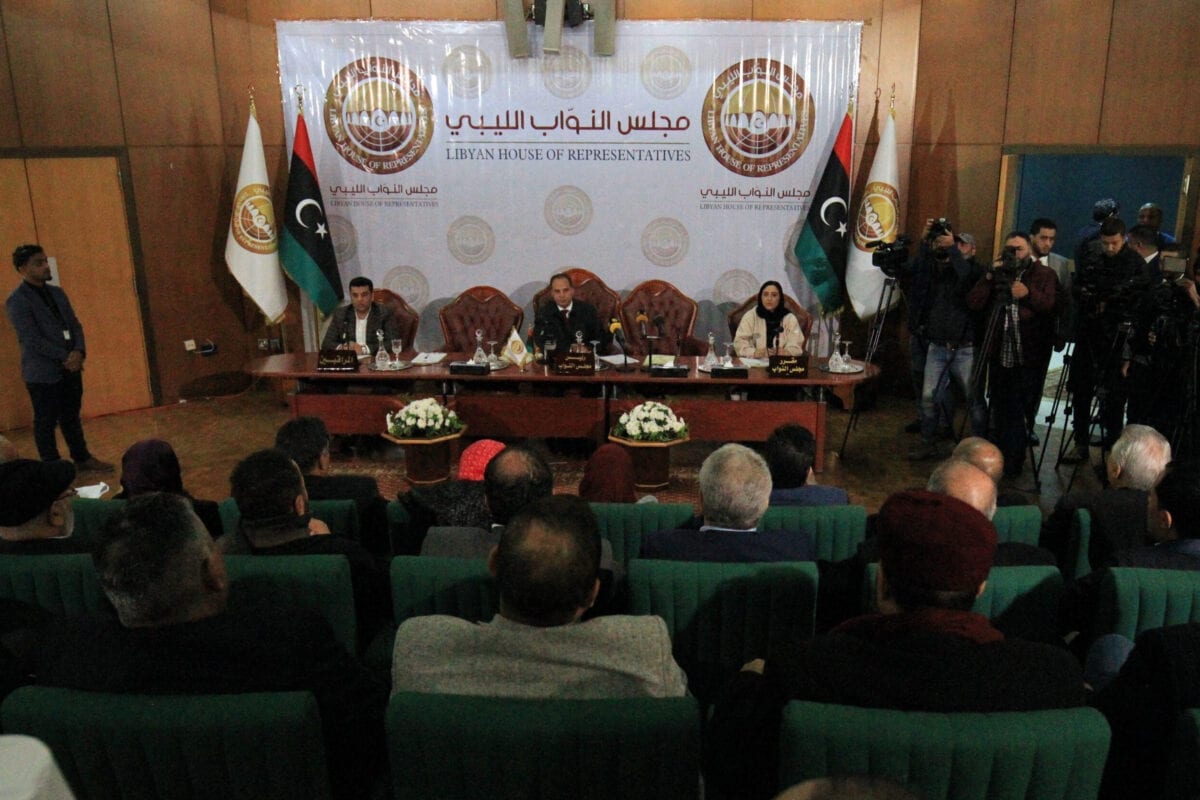 The Libyan House of Representatives (HOR) holds an emergency session in the eastern Libyan city of Benghazi on January 4, 2020 to discuss Turkey's prospective military intervention in support of the UN-recognised Tripoli-based government . - Libya's elected parliament in the east is allied with military strongman Khalifa Haftar, who is at war with the Tripoli-based GNA, headed by Fayez al-Sarraj. (Photo by Abdullah DOMA / AFP) (Photo by ABDULLAH DOMA/AFP via Getty Images)
June 21, 2020 at 3:01 pm

The Libyan parliament called on the government to be at full readiness against "aggression" from Egypt, denouncing recent comments by Egyptian President Abdel-Fattah Al-Sisi that his army could intervene in the war-torn country, Anadolu Agency reports.

In a recent statement, Libyan lawmakers asked authorities to take seriously recent threats by al-Sisi and to review all possible courses of action to respond in the "suitable time and place."

The statement on Saturday said al-Sisi's comments, which alluded to the possibility of sending an external military mission to Libya, amounted to "a direct threat of use of force against our state."

"Libya didn't pose a threat to Egypt's security, but rather the Egyptian regime contributed to the aggression on Libya's sovereignty and interfered with its safety and integrity of its territories," its said.

It also condemned al-Sisi for saying the Libyan army was a "terrorist militia," underlining that the country's military fought against terrorism under the internationally-recognized Libyan government.

Al-Sisi's threat is violation to the international law, as well as Libya's sovereignty, it added.

In a TV speech in the Egyptian city of Matrouh near the Libyan border on Saturday, al-Sisi suggested that Cairo could launch "external military missions" into Libya "if required," saying that "any direct intervention in Libya has already become legitimate internationally."

Al-Sisi told his army to "be prepared to carry out any mission here within our borders, or if necessary outside our borders."

The UN recognises the Libyan government headed by Fayez al-Sarraj as the country's legitimate authority as Tripoli battles the militias of renegade general Khalifa Haftar.

The government launched Operation Peace Storm against Haftar in March to counter attacks on the capital, Tripoli, and recently regained strategic locations, including Tarhuna, Haftar's final stronghold in western Libya.

It has severely condemned military backing by Egypt, the UAE, France and Russia to Haftar's attacks on Tripoli, which began on April 4, 2019.