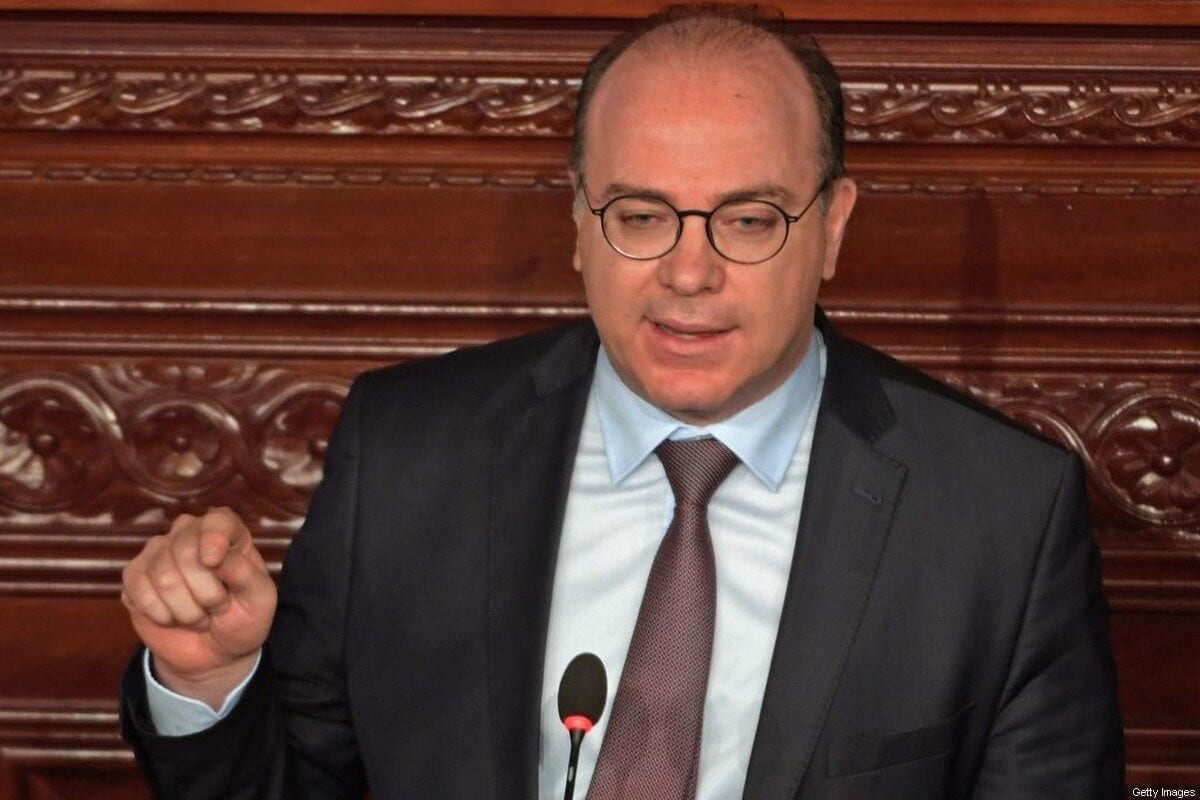 Tunisian Prime Minister Elyes Fakhfakh speaks during a parliament session with his ministers on June 25, 2020 in Tunis [FETHI BELAID/AFP via Getty Images]
July 17, 2020 at 1:02 am

The Tunisian Ennahda movement considers that the decision taken by the resigning Prime Minister Elyes Fakhfakh to dismiss the party's ministers "tampers with the stability of state institutions" and described this step as an "angry reaction" to the censure motion filed against him in parliament.

The dismissal of the aforementioned ministers was part of an escalating crisis between Fakhfakh and the Ennahda party (54 seats), especially since the movement decided to start consultations to form a new government, in light of the "suspicion of conflicts of interests" surrounding the former PM, which Ennahda believes negatively affected the image of the ruling coalition.

Ennahda denounced in a statement on Thursday: "The exemption of the movement's ministers from their duties, as the decision taken by the former prime minister is motivated by a convulsive reaction that will disrupt the work of state institutions and harm the interests of citizens and the country, in addition to tampering with public facilities, especially the health sector, in light of the coronavirus pandemic."

In a statement on Wednesday evening, the government announced that: "Ahmed Qaloul (minister of youth and sports), Moncef Al-Sliti (minister of equipment), Lotfi Zaitoun (minister of local affairs), Anwar Marouf (minister of transportation), Abdellatif Mekki (minister of health) and Salim Shoura (minister of higher education) are relieved of their duties."

Six other ministers were assigned to take over the responsibilities of the dismissed government members.

The decision to dismiss Ennahda ministers came after the Tunisian presidency announced on the same day that President Kais Saied received Fakhfakh's resignation, without detailing whether it was accepted or not.

On Wednesday, a petition demanding the withdrawal of confidence from Fakhfakh's government was presented to parliament. The bill was signed by 105 deputies including MPs from Ennahda, the Heart of Tunisia (27 seats) and Al-Karama Coalition (19 seats), local media reported.

Passing the petition to the parliament office requires 73 signatures, followed by voting in the plenary session by an absolute majority (109 out of 217), according to the constitution.

Ennahda stressed that: "This new stage requires maintaining dialogue and consultations between the various political and social parties to form a government of national unity that is capable of facing the ongoing crisis."

Tunisia: Sit-in moves to outside oilfield in Tataouine

The statement confirmed that: "The caretaker government must not overwhelm the administration with useless recruitments or dismissals with the intention of settling political scores."

The statement also requested the president to: "Assume his full responsibility to ensure the stability and neutrality of public facilities from political agendas."

Ennahda called on the Tunisian people to manifest: "Synergy and solidarity to overcome all obstacles and challenges facing the country, and to support the legitimate institutions of the state, and pride in the country's leading democratic experience that will contribute to reducing corruption and achieving wealth and development."

Following the dismissal of Ennahda ministers, the coalition, chaired by Fakhfakh since 27 February, will only include the Democratic Current (22 deputies), the People's Movement (14 deputies), Tahya Tounes (11 deputies) and the National Reform bloc (16 deputies).