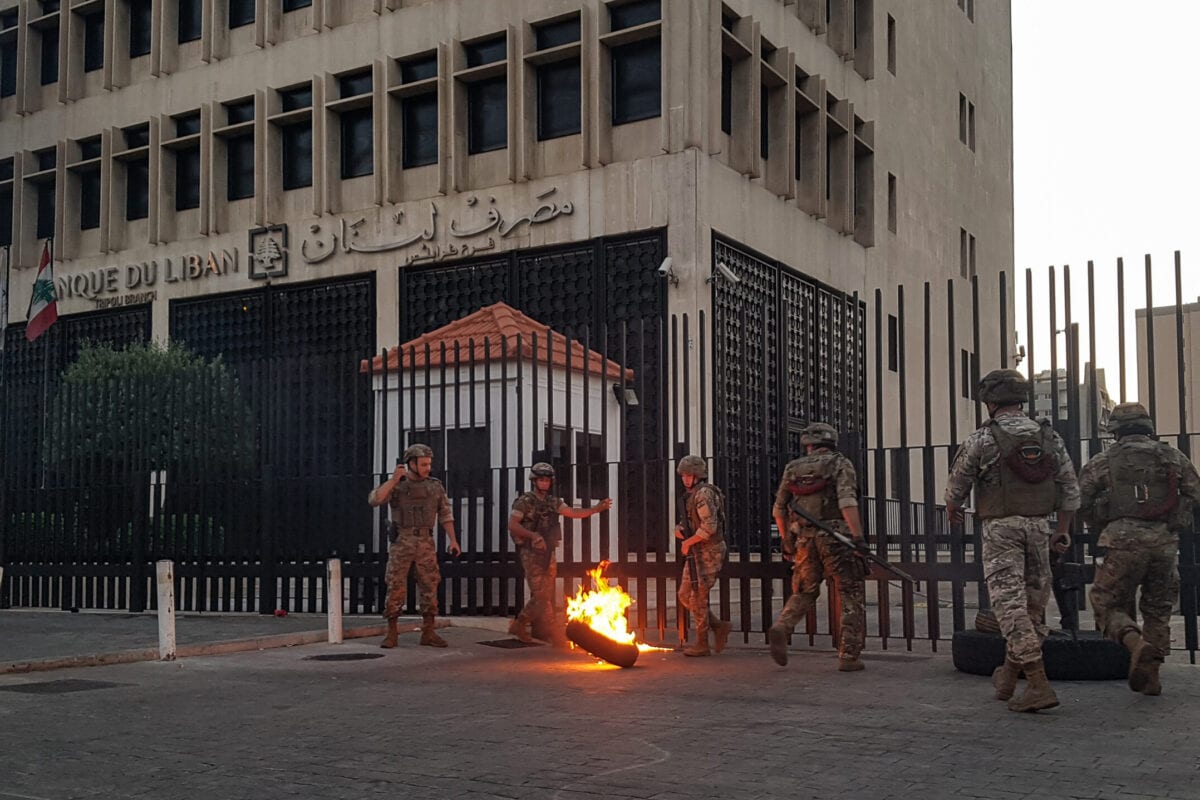 Lebanese Army soldiers roll away a flaming tire from the fence surrounding the local branch of the Banque du Liban (Lebanese Central Bank) as protesters gather to demonstrate against dire economic conditions in the northern city of Tripoli on June 11, 2020. - The Lebanese pound sank to a record low on the black market on June 11 despite the authorities' attempts to halt the plunge of the crisis-hit country's currency, money changers said. Lebanon is in the grips of its worst economic turmoil in decades, and holding talks with the International Monetary Fund towards securing billions in aid to help overcome it. (Photo by Fathi AL-MASRI / AFP) (Photo by FATHI AL-MASRI/AFP via Getty Images)
July 22, 2020 at 4:11 am

Lebanon's government agreed on Tuesday to hire turnaround specialist Alvarez & Marsal to conduct a forensic audit of the central bank as it grapples with a financial meltdown, reports Reuters.

Prime Minister Hassan Diab told cabinet the audit would "represent a drastic transformation on the path to uncovering what happened at the financial level in terms of waste and theft".

Ministers also agreed on KPMG and Oliver Wyman for a financial audit, the presidential palace said after the cabinet met there.

Lebanon needs foreign aid badly to claw its way out of a financial crisis that has slashed the value of its currency since late last year. Banks have shut savers out of their dollar deposits as already critical foreign reserves dwindle and the greenback grows ever more scarce.

Talks with the IMF have been bogged down by a row over the scale of financial losses that have embroiled the government, the central bank, commercial banks and MPs from the dominant political parties.

Foreign donors who once helped Lebanon have made it clear that any more help hinges on Beirut enacting reforms.

"Among the measures that need to be taken…, we are thinking of a complete and transparent audit of the Lebanese central bank, which is a necessity to establish the debt and losses of Lebanon and to build a reform plan for the real needs of Lebanon," a European diplomat told Reuters.

After the state defaulted on its hefty foreign currency debt and launched restructuring talks with creditors in March, Diab said there would be an audit of central bank accounts in a bid to show transparency.

In an attack on central bank governor Riad Salameh's performance in April, Diab cast him as responsible for the currency crash, mounting losses in the banking sector and lack of transparency.

Salameh defended the central bank's practices and said it did not hide information. He has deflected the blame back towards successive Lebanese governments for failing to launch reforms or sort out public finances.

Ex-Lebanon politician: Only 6 people own the country's wealth