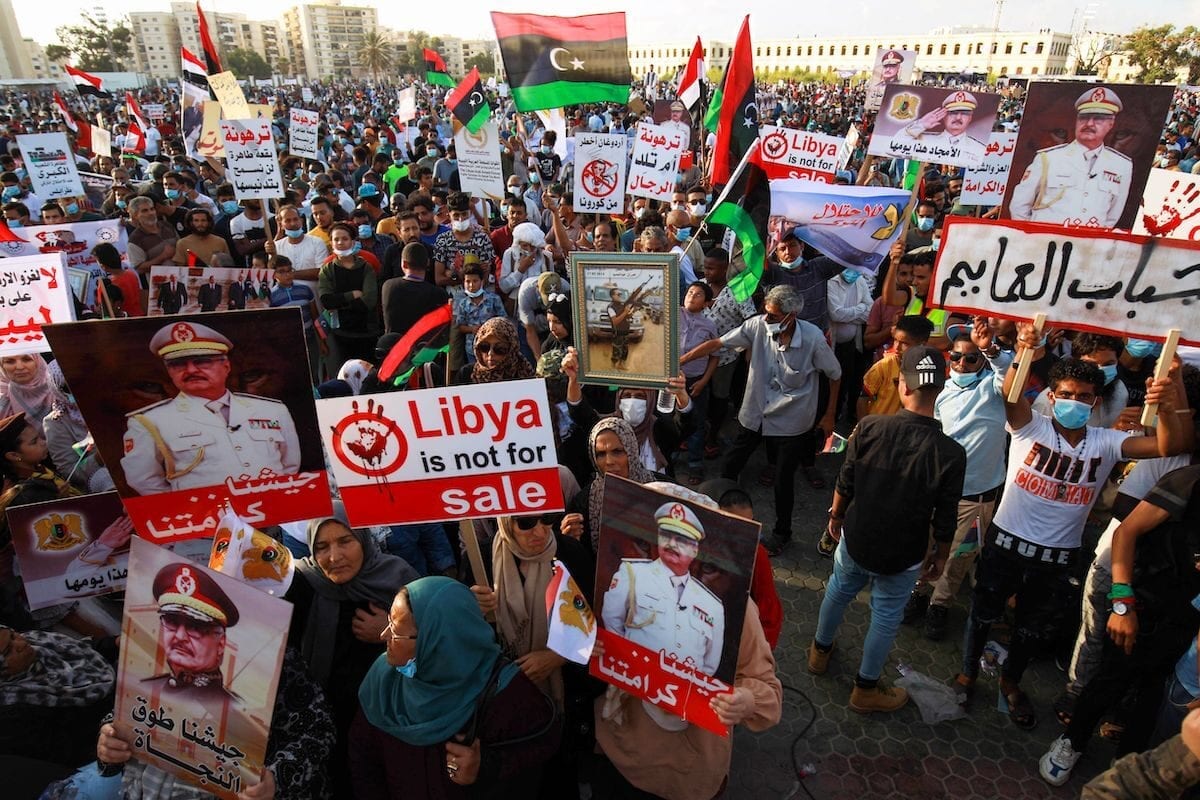 Supporters of Libyan military strongman Khalifa Haftar take part in a gathering in the eastern Libyan port city of Benghazi on July 5, 2020 [ABDULLAH DOMA/AFP via Getty Images]
August 24, 2020 at 1:10 pm

According to the news channel, Ahmed Mismari, spokesman for Haftar's Libyan National Army (LNA), said rival forces from the war-torn country's west were mobilising around front lines in the centre of the country.

"The eastern-based forces were ready to respond to any attempted attack on its positions around the coastal city of Sirte and Jufra, further inland," he said in a media briefing.

Earlier Friday, the Libyan government announced an immediate ceasefire across the country, calling for presidential and parliamentary elections next March.

This statement came from the LNA after the announcement of a ceasefire and a call for the resumption of oil production by the Tripoli-based Government of National Accord (GNA), headed by Prime Minister Fayez Al-Sarraj.

On the other hand, the speaker of the Tobruk Parliament in Libya, Aguila Saleh, called in a statement for an immediate armistice and for Sirte to be the temporary headquarters of the new Presidential Council.

Also, Libya's Turkish origin politician and the chairman of the High Council of State, Khalid Al-Mishri, announced on Wednesday his eagerness to meet with Saleh in Morocco, as part of the efforts made by Rabat to resolve the Libyan crisis.

The developments two months after the conflict in the governorates of Sirte and Jufra. The US and Germany called for the area to be transformed into a demilitarised zone with the opening of oil fields and ports.

Last June, the Libyan army liberated most of the western region from the militias of General Khalifa Haftar and foreign mercenaries.

Haftar's militia, supported by Arab and European countries, launched an attack against Tripoli on 4 April 2019, which resulted in civilian injuries and deaths as well as massive destruction. However, Western forces incurred extensive losses after the national army intervened amid widespread calls for dialogue and a political solution to the worsening crisis.

For years, Libya has witnessed armed conflict, as Haftar's forces, supported by Arab and Western countries, contested the internationally recognised Libyan government over legitimacy and authority in the oil-rich country.