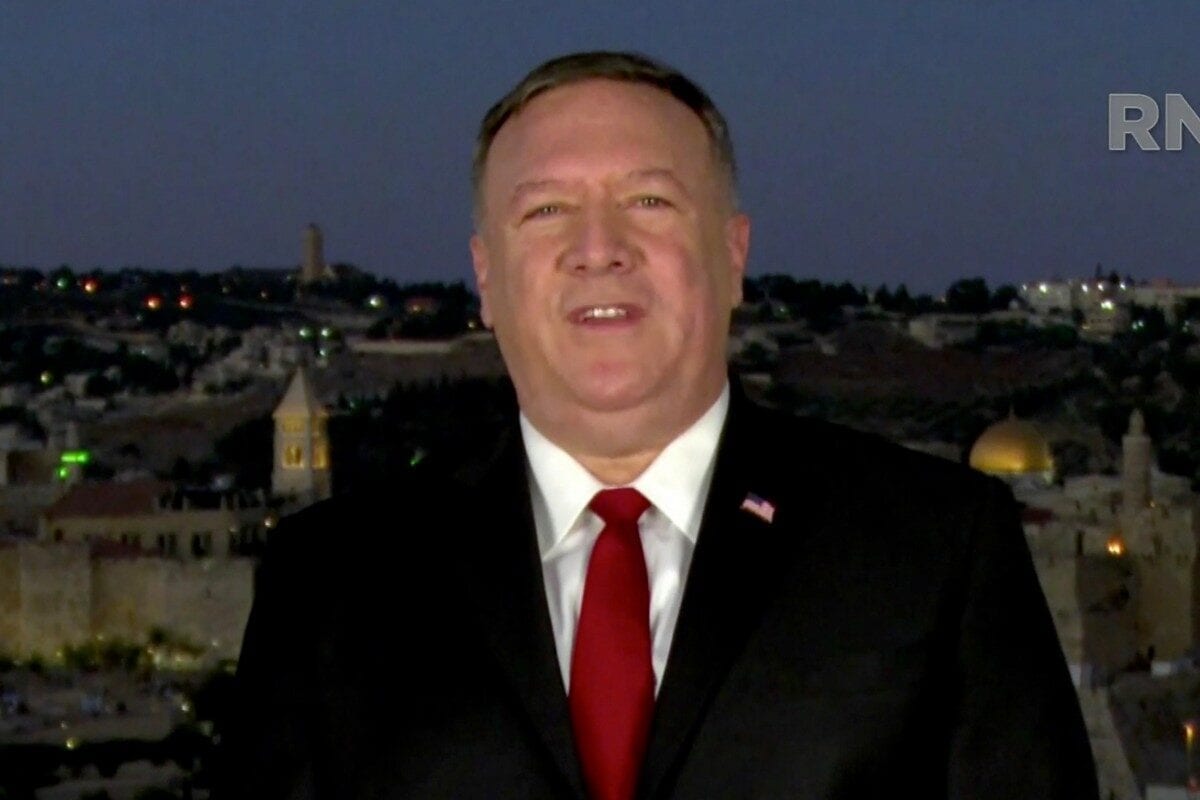 US Secretary of State Mike Pompeo in Jerusalem on 25 August 2020 [Committee on Arrangements for the 2020 Republican National Committee/Getty Images]
August 26, 2020 at 3:22 pm

US Secretary of State Mike Pompeo has come under fire for making a speech yesterday from Israeli occupied Jerusalem addressed to the Republican National Convention back in America, the Washington Post has reported. An evangelical Christian himself, Pompeo's speech was aimed at millions of Christian Zionist voters, triggering accusations of a breach of ethical norms. It will now be the subject of an official investigation.

"Pompeo speaking from Jerusalem breaks multiple traditions and norms," explained Wendy Sherman, who served as Undersecretary of State for Political Affairs in the Obama administration. "Secretaries of State, as far as I can find, have never appeared at a political convention. They, like the Secretary of Defence, have been above politics because they stand for America in the world."

The speech, which was recorded in Israel and aired yesterday, is now under investigation by the House Foreign Affairs Committee's subpanel on oversight. The subcommittee's chairman, Representative Joaquin Castro (Democrat, Texas) called the speech "highly unusual and likely unprecedented", and suggested that "it may also be illegal."

Former diplomats and foreign policy experts have also lambasted Pompeo, accusing him of mixing personal beliefs with US interests. Such accusations have been levelled against him before. A New York Times article last year suggested that the 57 year old, who is a member of the right-wing Tea Party movement, had a tendency to blend his religious beliefs with politics.

White evangelical Christians are a powerful force in the Republican Party. Vice President Mike Pence is a staunch believer and former President George W Bush is said to be one as well. Many evangelicals are also staunch Zionists, outnumbering Jewish Zionists by a considerable margin.

A survey by the Washington Post found that half of evangelical Christians support Israel because they believe it is important for fulfilling end times prophecy. Jerusalem is the lynchpin of their eschatology, their understanding of the end times which maintains that the second coming of Christ will follow a rebirth of Jewish culture in historic Palestine and control over the holy land.

In an interview, Pompeo has suggested that it was possible that Trump's recognition of occupied Jerusalem as Israel's capital in 2018 was divinely ordained. Trump himself has admitted that his controversial move of the US Embassy to Jerusalem was for large sections of his electoral base made up of evangelical Christians. The US President said that his Bible-thumping supporters were "more excited by that than Jewish people."

Pompeo's visit to Israel is part of a mission to build on the newly announced normalisation of ties between Israel and the United Arab Emirates by persuading more Arab countries to do the same.