Nine years after NATO reshaped their country, Libyans are embracing a ceasefire 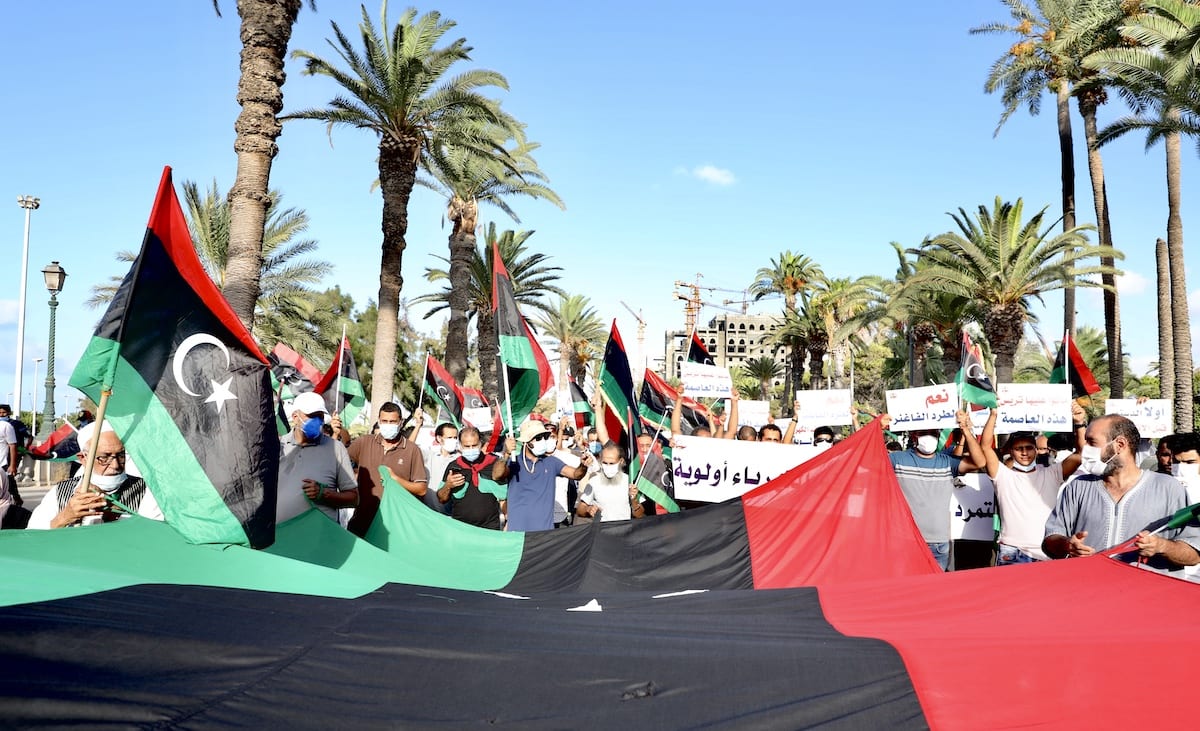 Hundreds of people gather at Martyr's Square during a demonstration to protest against hard living conditions and the leader of the illegitimate armed forces Khalifa Haftar's oil blockage, on 25 August 2020 in Tripoli, Libya. [Hazem Turkia - Anadolu Agency]

Almost simultaneously last Friday, Libya's rival authorities published statements calling for an immediate ceasefire, a return to talks and a host of other encouraging proposals which seem almost too good to be true. In a statement on Facebook, the head of the Government of National Accord (GNA), Fayez Al-Sarraj, said that he has ordered the armed forces to halt fighting across Libya. A few hours later, Aquila Saleh of the Tobruk-based parliament, and a supporter of Field Marshal Khalifa Haftar, followed with his own statement also calling for a ceasefire. Saleh's statement requested "everyone" to abide by a ceasefire across Libya.

Despite being the supreme commander of the Libyan National Army (LNA), led by Haftar, Saleh did not mention either by name, which was a clear sign of a disagreement with the nominally retired senior officer. This was confirmed two days later by Haftar's spokesman, Ahmed Mismari, who dismissed the GNA's ceasefire call as "a marketing stunt". In his televised remarks, Mismari accused the GNA of mobilising forces near Sirte to launch an "attack" on LNA positions. He neither mentioned Saleh's call for a ceasefire nor referred to him in any way. This was another confirmation of differences within the Haftar camp.

Strikingly, both Al-Sarraj and Saleh made the statements in their own names and not on behalf of the institutions they lead. This casts doubts on how serious the ceasefire calls are and how effective they will be. The GNA itself does not appear to be in agreement with Al-Sarraj.

On the ground, though, there has been no fighting since the LNA was forced in June to withdraw to its current positions in Sirte on the coast, and Jufra oasis further south. Thus, the ceasefire calls merely emphasise what is already a fact. Other than that, both statements disagree on almost everything else.

The curse of the tent: Gaddafi warned us, but we didn't listen

Since the devil is in the detail, in Libya's case there are always two devils instead of one in every little detail. What prompted this change of heart on both sides remains a mystery, but many factors can be said to have contributed.

After making their intentions clear they have to market this U-turn to their respective constituencies and political backers. Ordinary Libyans are exhausted and squeezed so badly that they would welcome any truce which gives them some breathing space to deal with their daily difficulties during the Covid-19 pandemic.

Politically, supporters of the GNA and some from within its ranks were, just couple of weeks ago, rejecting any talks before the total, humiliating defeat of Haftar's LNA. They contend that they did not defend the capital, Tripoli, only to accept a truce while LNA troops still control large swathes of the country, including the vital oil fields and export terminals. Among the hawks are the military field commanders, particularly from Misrata, who fought the LNA with Turkish help; people like Ibrahim Bayt Al-Mal, for example. Among the politicians there is Khaled El-Mishri, who gave up his Muslim Brotherhood membership and is the chairman of the Higher Council of State, the very body that is supposed to negotiate any new agreement. He is opposed to any talks that might include Haftar.

However, foreign backers hold the real power on both sides and seem to understand that a comprehensive military victory is impossible and a political solution is the only way forward. Moreover, the involvement of Turkey behind the GNA and Russia's Wagner group fighters alongside Haftar has pushed the US and the EU to step up their diplomatic efforts to at least freeze the conflict until after the US presidential election scheduled for 3 November.

In the past two months diplomatic and political moves have seen the German Foreign Minister visiting Libya and meeting with GNA and Haftar representatives. Germany hosted the international conference on Libya in January and is seeking a more active mediation role. The US, meanwhile, senses the danger of Russia's presence in Libya and wants to impose a truce until the election is over. Washington's Ambassador in Libya, Richard Norland, has been very active talking to both the GNA and the Haftar camp, calling for a ceasefire and a return to the political process.

Egypt, the UAE, Turkey, the EU, the US and Russia may support different sides, but all have welcomed the ceasefire calls and expressed support for political dialogue between the Libyan adversaries.

READ: Is France isolated by EU countries due to its Libya-Turkey policy?

Recent developments in Libya, though, cast doubt on how an agreement could be reached under the current corrupt political elite. Unusually, thousands of young people took to the streets in half a dozen Libyan cities, including the capital and Benghazi, demanding better living conditions. They defied the suffocating heat in order to take part in the protests. The social media-organised and leaderless "23/8 Hirak movement" started in Tripoli on 23 August and spread quickly. The protesters rallied behind one issue: the improvement of government services and living conditions in the country. Two days later, the protesters called for both authorities in Libya to step down immediately.

Life in Libya is a daily struggle, with almost everything in short supply: the banks lack cash; electricity cuts occur daily, sometimes for 9 hours at a time; prices are rocketing; and there is a shortage of drinking water. In Tripoli, where the demonstrations started, drinking water has been on and off for over two months in temperatures averaging 40 degrees centigrade.

Fayez Al-Sarraj has attempted to reassure the people by announcing an imminent cabinet reshuffle and saying that corrupt officials will be held to account. He became an immediate target of scathing jokes and mockery.

While the military and political situations remain uncertain, ordinary people in Libya are fed up but agree on one thing: all politicians should go, and all should go now. They want a ceasefire, and reject what new Libya has become nine years after it was reshaped by a NATO bombing campaign.