Labour is slipping back into Zionist hegemony 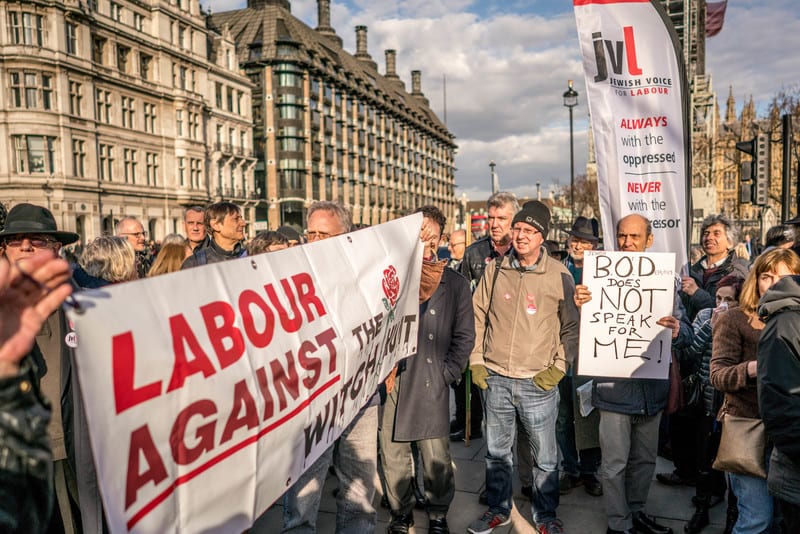 Jewish Voice for Labour supporters demonstrating against false claims of anti-Semitism, in London on 26 March 2018 [Twitter]

The Trades Union Congress (TUC) this week agreed a motion proposed by the general union Unite, opposing Israel's plan to annex much of the West Bank, and calling for sanctions against the occupation state.

The motion was historic in more ways than one. Significantly, it twice used the word "apartheid" to describe the situation in the West Bank.

I am told by a source that the TUC faced immense pressure from the Israelis to scrap or water-down the motion in some fashion. The source wouldn't go into details, but they did confirm that the Israeli embassy had been pressing hard against the motion.

It should not have to be this difficult to call things as they really are. It is quite simply a fact that Israel is an apartheid state – through and through.

As only one example: the settlements that Israel builds in the West Bank are built for Jewish Israelis on confiscated Palestinian land, from which Palestinian homes have been bulldozed and Palestinians expelled.

Palestinians are frequently prohibited from the road network that connects these settlements, to favour and privilege the Jewish Israeli settlers. Due to Israel's apartheid regime, there are even entirely separate legal systems for Palestinians and Jews in the West Bank.

Israeli settlers have access to lawyers and civilian courts, while the indigenous Palestinians are confined to the farce of "military justice" courts entirely run by Israeli army officers.

Unsurprisingly, they have a 99.7 per cent conviction rate.

This is why Palestinians insist that every single Palestinian prisoner in Israeli jails is a political prisoner.

The TUC motion was an encouraging sign, which provided a much-needed boost to Palestine solidarity campaigners and grassroots left-wing Labour Party members this week.

Since left-winger Jeremy Corbyn stepped down as Labour leader in April, the grassroots membership of the party has been demoralised, dispirited and divided.

Corbyn's right-wing successor Keir Starmer long ago declared himself a supporter of "Zionism without qualification".

Stop and think for one minute how appalling that is. The leader of the supposedly "left-wing opposition" party in the UK supports "without qualification" a colonial movement for the replacement of Palestine's indigenous people with Jewish settlers from Europe and all over the world.

In the summer, Starmer triumphantly declared that "the Labour Party is under new management" and set about trying to prove it by genuflecting to the pro-Israel lobby, and agreeing to their every demand.

Despite the fact that the membership of Labour (and now the leadership of the TUC) almost unanimously supports sanctions against Israel, Starmer in July held a meeting with Labour Friends of Israel in which he hinted at overturning Labour's policy (established during the Corbyn years, thanks to grassroots pressure) of ending the arms trade with Israel, and boycotting settlement goods.

The advances of the grassroots in Labour on the issue of Palestine in recent years were hard-fought – but they are now in dire peril of being reversed.

Corbyn's personal failure to fight back against the years-long fabricated "Labour anti-Semitism" smear campaign has had terrible results – and not just for Labour.

It led not only to Corbyn's political assassination (although it meant that, too), but it had a malign knock-on effect for the entire Palestine solidarity movement and for the right to free speech in this country in general.

The Starmer regime's top-down edicts that ban constituency Labour Parties from even discussing these issues, are a sign of that.

The legitimacy that Labour gave to the entirely bogus "working definition" of anti-Semitism long flogged by Israel and its propaganda cut-outs around the globe, has also been a disaster.

A group of leading Palestinian citizens of Britain on Friday issued a warning that they are being squeezed out of the Labour Party and banned from expressing their natural right to oppose Zionism – the very same ideology that expel, kills and oppresses them.

It demanded the right "to openly criticise the ideology of Zionism," and warned of a shrinking space in Labour for their rights and narrative.

But disgustingly, not a single Labour movement publication would touch the letter with a barge pole.

The leading figures of the Labour movement have been so thoroughly co-opted or intimidated into submission by the triumphant Zionist movement – for fear of being tarred with the smear of anti-Semitism – that, as of this writing, not a single one of them has had anything to say about the letter, not even Corbyn.

That the right-wing, anti-Corbyn Labour publications LabourList and the New Statesman would refuse to publish the letter, is no surprise.

But the "socialist" magazine Tribune did not even bother replying to the signatories' requests to publish, despite being offered the letter as long ago as July, and in spite of repeated attempts to follow up.

This is a sign of the hopeless state of affairs in the Labour Party today when it comes to criticising Israel and its official ideology, Zionism.

It seems Labour is slipping back into the Zionist hegemony which held sway in the party in the 1940s, as part of its wider commitment to British imperialism.