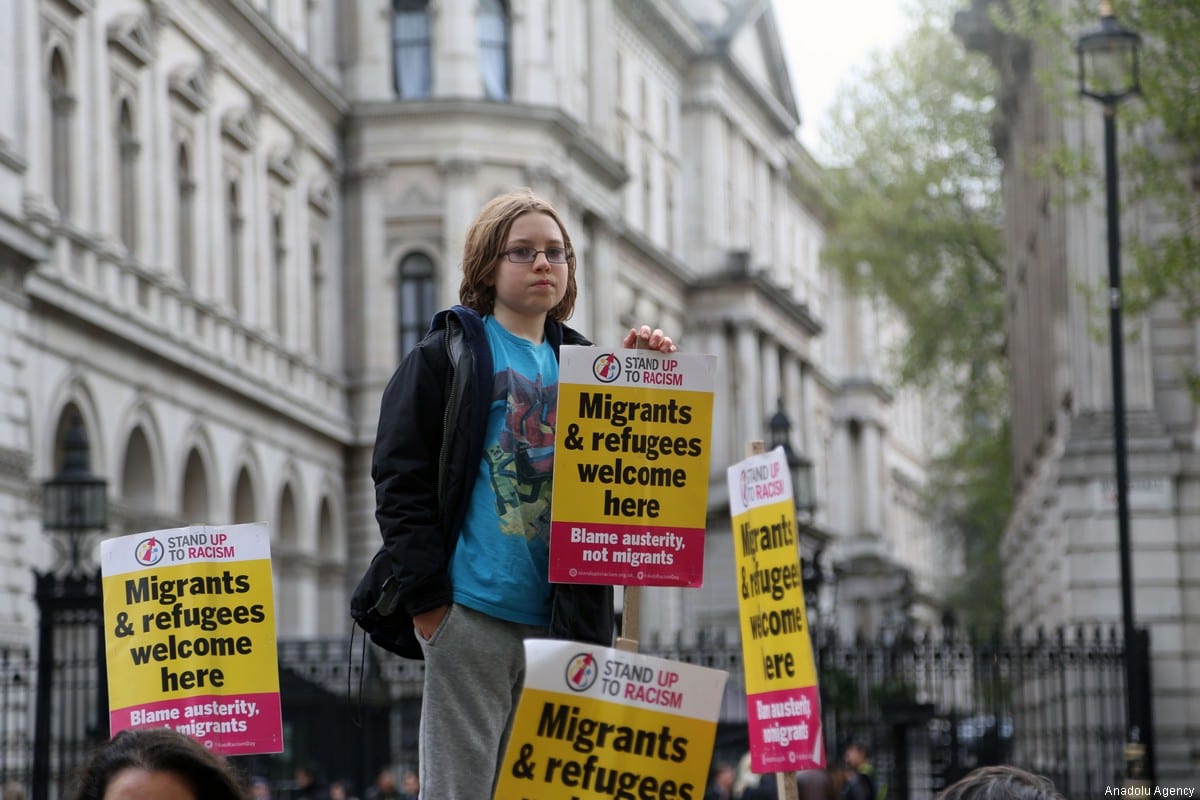 People stage an anti-racism protest, demanding that immigrants who have been waiting at Dunkirk refugee camp to enter England on 13 April, 2017 [Tayfun Salcı/Anadolu Agency]
August 28, 2020 at 4:04 pm

The UK Home Office has come under sharp criticism over the release of a video attacking lawyers representing migrants. The short clip, posted on the Home Office Twitter account on Wednesday, has since been taken down following condemnation from legal bodies, politicians and academics, amidst the ongoing row over the British government's policy towards migrants.

The "divisive" video, denounced for its disparaging characterisation of British lawyers, featured an animated image of planes deporting migrants from the UK with the caption: "We are working to remove migrants with no right to remain in the UK, but currently return regulations are rigid and open to abuse… allowing activist lawyers to delay and disrupt returns." Despite being taken down the clip has been viewed 1.5 million times.

The video triggered widespread condemnation. Labour MP Kate Osamor is reported by Sky News saying that it was "dishing out racism, xenophobia and persecution" while Joanna Cherry QC, an SNP MP, called it a "disgraceful" piece of "propaganda" against the justice system.

Nazir Afal, a former chief prosecutor, added that it was "scandalous" as "activist lawyers ensure humans have rights" and that "our laws are followed".

The Law Society also condemned the reference to immigration lawyers who provide legal advice to migrants as "activist lawyers" in a press release. "Attacks on the integrity of the legal profession undermine the rule of law," said Law Society President Simon Davis.

"Solicitors advise their clients on their rights under the laws created by parliament," the statement said, adding: "To describe lawyers who are upholding the law as 'activist lawyers' is misleading and dangerous."

The Bar Council, which represents all barristers in England and Wales, is also reported by the BBC condemning the video, saying lawyers were "merely doing their jobs" and were not "activists".

Jonathan Portes, a lawyer at King's College London, lodged a formal complaint to which the Home Office admitted that the phrase "should not have been used on an official government channel" and added that it had "made clear to the team this post should not be used again from Home Office accounts or anywhere else by civil servants."

Following the death of a Sudanese migrant, Abdulfatah Hamdallah, who was found on French shores earlier this month, drowned after trying to make it to Britain, the Tory government's policy towards migrants has been widely condemned. Writing in the Guardian, commentator Nesrine Malik said that "British hypocrisy is to blame for the deadly plight of migrants."