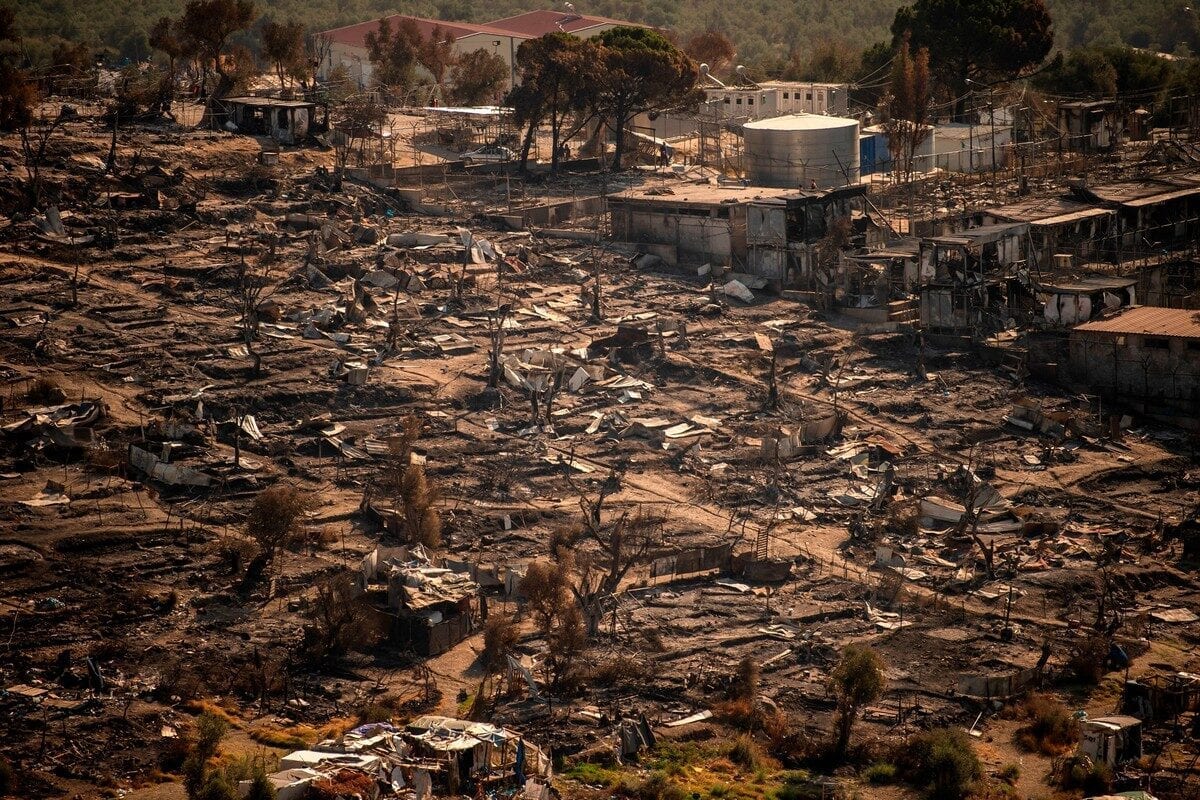 Greece’s Moria refugee camp in Lesbos was burnt to the ground after fires broke out, 16 September 2020 [ANGELOS TZORTZINIS/AFP/Getty Images]
October 23, 2020 at 4:29 pm

Thousands of migrants who fled from Moria Camp in Greece when it burned down in September are now facing the winter in even worse conditions, Oxfam and the Greek Council for Refugees have warned. The conditions in the new Kara Tepe Camp, where nearly 7,500 of Moria's 13,000 former residents have been sheltering for the past six weeks, "are abysmal".

Thousands of refugees moved to the temporary camp last month after they were made homeless when a series of fires razed Moria camp on 8 September. Aid workers have said Moria, which had a capacity for less than 3,000 people but housed an estimated 13,000, was a "time bomb that finally exploded."

However, Oxfam and the Greek Council for Refugees have now said that the Kara Tepe Camp has "inadequate shelter, hardly any running water, limited healthcare services, and no access to legal aid." Oxfam's EU migration expert, Raphael Shilhav, has condemned the Greek authorities' decision to build a temporary camp on the island of Lesbos, calling their response to the Moria fires "pitiful".

The authorities, said Shilhav, have "opted for another dismal camp at the external borders, trapping people in a spiral of destitution and misery. When Moria burnt down, we heard strong statements from EU decision-makers saying, 'No more Morias'. But the new camp is rightly dubbed Moria 2.0."

Both organisations are calling for residents of Kara Tepe, which is built on the site of a former coastal military firing range, to be relocated to proper accommodation on the Greek mainland and in other EU countries.

Oxfam officials visited the camp at the end of the September to assess the suitability of the place. At Kara Tepe, they found "numerous risks", including "limited access to food and healthcare, insufficient measures against Covid-19, as well as no drainage or sewerage system on site."

The lack of proper sanitation and running water, Oxfam said, meant that the camp's residents have been washing in the sea, potentially risking drowning or infection from wastewater, which is also drained untreated into the sea.

Women are also at risk in Kara Tepe, with a lack of proper lighting, toilets and showers. This could leave female residents vulnerable to sexual and gender-based violence.

Meanwhile, many of the resident's tents lack solid foundations, meaning that the people have little protection against harsh winter weather, such as strong winds, heavy rain and storms.