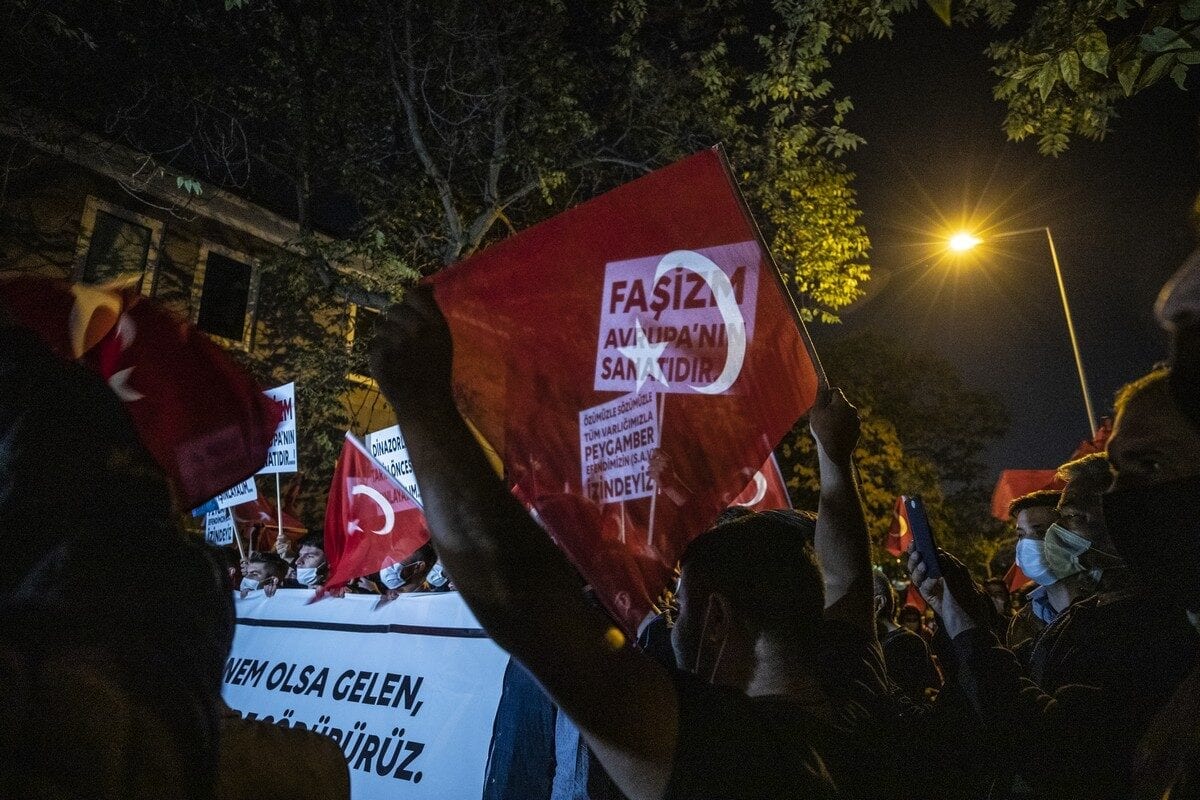 Protest against the publication of cartoons of Prophet Muhammad in France and against President of France Emmanuel Macron over his anti-Islam remarks in Ankara, Turkey on 28 October 2020 [Esra Hacioğlu/Anadolu Agency]
October 29, 2020 at 1:17 pm

France has been accused of spreading "cultural racism and hatred" by Turkish officials who have vowed to take legal action against the French satirical magazine Charlie Hebdo, in the latest round of the bitter row between Paris and Ankara.

State media said Turkish prosecutors have launched an official investigation into Charlie Hebdo after it followed up its re-publication of highly offensive cartoons of the Prophet Muhammed (peace be upon him) with a caricature of the Turkish President, Recep Tayyip Erdogan, on the latest front cover of its magazine. The cartoon depicts him as a sexually depraved person while also displaying an apparent mocking reference to the Prophet Muhammed (PBUH).

Erdogan is reported saying that he was upset and angry "not because of the disgusting attack on me" but because of the "vulgarity against our prophet whom we consider dearer than our own lives".

The Turkish president, who said he had deliberately avoided looking at the cartoon, added: "We know that the target is not me, but the values that we are defending . . . It is our honour to take a sincere stand against attacks on our prophet."

Turkey's Minister of Justice, Abdulhamit Gul, informed reporters that Turkey will respond through legal means saying that Turkish law contained measures for imposing sanctions on people that attack "our country and our values" and that "necessary steps" had been taken.

In response, presidential communications Director Fahrettin Altun said: "Charlie Hebdo just published a series of so-called cartoons full of despicable images purportedly of our president. We condemn this most disgusting effort by this publication to spread its cultural racism and hatred."

Vice-President Fuat Oktay called on the international community to raise its voice against "this disgrace" adding "you cannot fool anyone by hiding behind freedom of thought."

Relations between Paris and Ankara are the lowest in recent memory. The two countries have also locked horns over gas exploration in Eastern Mediterranean and in the conflict in Libya where they support opposing sides.