Sentencing of 20-year-old Sergeant Elor Azaria will be handed down at a later date
January 4, 2017 at 10:54 am | Published in: Israel, Middle East, News, Palestine, Videos & Photo Stories

An Israeli soldier who killed a wounded Palestinian was convicted of manslaughter by a three-judge panel at a Tel Aviv military court today.

According to reports, Justice Maya Heller rejected arguments made by Elor Azaria's legal defence team, namely "that the Palestinian assailant was already dead and that Azaria felt threatened at the time of the shooting", saying: "You can't have it both ways." 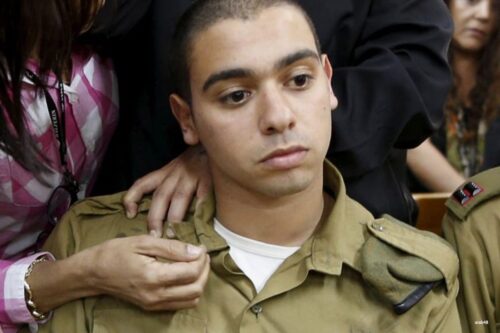 Twenty-one-year-old Palestinian Abdul Fatah Al-Sharif was lying wounded and motionless on the ground when Azaria shot him in the head.

Sentencing of 20-year-old Sergeant Elor Azaria will be handed down at a later date.

The scenes in Hebron were captured on video by a Palestinian human rights activist, and the footage drew attention to the use of lethal violence by Israeli occupation forces against Palestinian alleged assailants. Azaria was subsequently charged with manslaughter.

Though convicted, questions remain as to whether Azaria will have his sentence commuted or whether he might even be pardoned. Israeli Minister Miri Regev, even before the verdict was confirmed, vowed to pardon the solider.

Read: 'We carried out many executions, but have not been tried,' Israeli officer tells court

Outside the court, noisy supporters of Azaria abused passing Palestinian workers with chants like "Mohammad is dead", while others were pictured holding a banner in support of US President-elect Donald Trump.

Meanwhile, hundreds of protesters also blocked traffic and clashed with police outside the army headquarters in Tel Aviv, angry at the prospect of Azaria's conviction.

Ahead of day's verdict, Human Rights Watch issued a new statement, documenting instances where senior Israeli officials "have been encouraging Israeli soldiers and police to kill Palestinians they suspect of attacking Israelis even when they are no longer a threat."

Read: Israel files charges in under 2% of fatal shooting case