You have Trump's promise and we have Ahed Tamimi 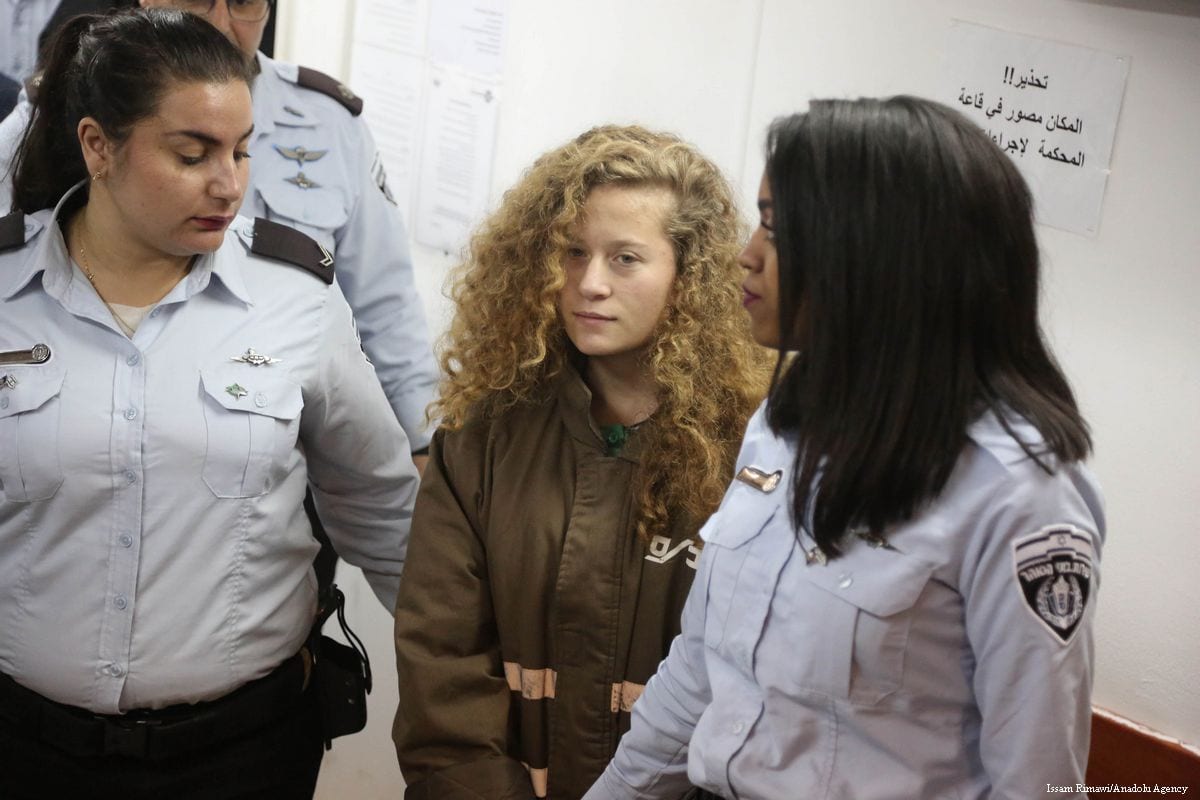 17-year-old Palestinian Ahed Al-Tamimi, appears in court after she was taken into custody by Israeli soldiers, in Ramallah, West Bank on 28th December 2017 [Issam Rimawi/Anadolu Agency]

Those who are outraged by the logo of any Qatari channel are not at all angered by Hebrew letters on the bag of a Zionist sneaking into the Prophet's Mosque in Medina on a Saudi visa.

Among them, too, are those who look at the image of the fierce resister, the young girl Ahed Tamimi, and only see her as an insolent girl with her uncovered hair.

It is very logical that those who found comfort in Trump's era are not very enthusiastic about Ahed Tamimi, with her uncovered hair, which is purer than the beards of a thousand sheikhs and priests who falsify and sell texts and fatwas under the feet of a Zionist ruler.

With regards to the selling of fatwas, given the preoccupation with the anger over Jerusalem, there are calls seeping through for travel to the occupied city under the pretext of supporting the Arab identity of Jerusalem and protecting it from the attacks of Judaisation and Israelisation.

What has changed for this tone to return and try to open channels of normalisation which the people of Jerusalem themselves do not want?

The campaign for Ahed Tamimi's release should reflect her stance

Jerusalem is still occupied and its occupation has intensified, and therefore the reasons for not visiting it remain valid, i.e. the occupation is still existent. These reasons have been considered and discussed to death by jurisprudential and political circles. They all concluded that visiting Jerusalem with an Israeli visa and according to the will and supervision of the occupation falls under the category of free normalisation.

In Egypt, the eternal saying of the former patriarch, Pope Shenouda III of Alexandria, is still valued and appreciated by all those concerned with the issue of resisting the occupation and rejecting normalisation with Israel. The patriarch persevered in the face of blackmail in the name of religion in order for him to grant his approval for Christians to make pilgrimage to the Church of the Holy Sepulchre.

In the winter of 2001, in an interview with the audience of the Cairo International Book Fair, Pope Shenouda reiterated his firm position when he said: "My visit to Jerusalem now, under the Israeli occupation, is useless. In addition to this, Israel will say to us you can visit and we will rule. Our visit to Jerusalem now will lead to economic viability for the Jews, and the Jewish media will portray this visit as it pleases."

He added: "I will only enter Jerusalem with a Palestinian visa on my passport, with my friend, Al-Azhar Sheikh Dr Mohamed Sayed Tantawi, and my Arab brothers. This will not happen until the occupation is removed from Jerusalem and Al-Aqsa Mosque is under the control of the Palestinian Authority."

This clear and honourable Arab position coincided with the positions of four Al-Azhar Sheikhs over the past 40 years, starting with Dr Abdel Halim Mahmoud, who refused to accompany Sadat in his visit to occupied Jerusalem in 1977. This was followed by the position of Sheikh Gad Al-Haq Ali Gad Al-Haq, who refused to give in to the storms of the Oslo Accords and announced that Muslims who go to Jerusalem are sinners, and that Muslims should not visit Jerusalem until it is cleansed of the desecration of the Israeli invaders and is restored to its rightful owners and the word of God and the call of prayer is raised. He also believed that every Muslim must do everything in their power to liberate the occupied city of Jerusalem and its captive mosque.

Despite his leniency in meeting with Zionist rabbis in his office, Al-Azhar Sheikh Mohammed Sayed Tantawi did not dare to deviate from the positions of his predecessors. He emphasised that he refuses to visit Jerusalem while it remains chained by the Israeli occupation forces, because any Muslim visiting at this time "is considered a recognition of the legitimacy of the Israeli occupation and a blessing of its brutal authority".

Ahed Tamimi: The symbol of the new defiant Palestinian generation

Finally, the current Al-Azhar Sheikh Ahmed Al-Tayeb, also adopts the same position on visiting Jerusalem, saying that it does not benefit Muslims because it is under Israeli occupation and is with the permission of the occupation authorities.

In contrast to these steadfast positions, we find conflicting positions by the "moderate Arabs" or the "Arabs of Trump and Ivanka" who use highly inflammatory and shallow justifications. An example of this is the statement made by the Secretary-General of the OIC in 2015, Iyad Madani, and then Saudi researcher Anwar Eshki, as well as the visit of a delegation sent by the Bahraini government at the height of the Arab anger against US President Donald Trump's decision.

The facts on the ground tell us that these free normalisation visits have not reined in the American Zionist efforts towards the Judaisation efforts, on the contrary, they accelerated their path and increased Israel's appetite for the Holy City. This is occurring amid blatant Arab collusion, expressed by Bahrain's foreign minister when he said that Trump's announcement is a marginal and secondary issue that should not distract from major issues. Of course he is referring to escalating hostility against Qatar and engaging in major historical battles against any microphone with the logo of Qatari television stations.