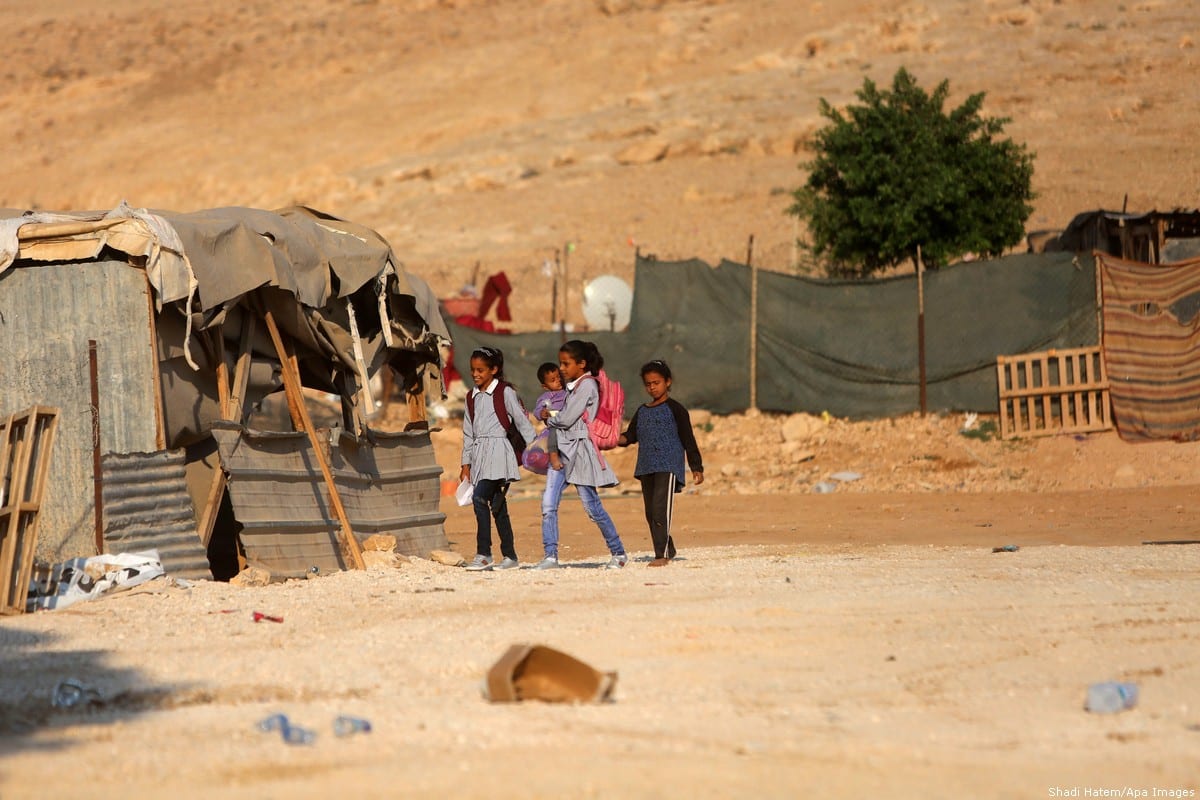 Palestinian schoolchildren and make shift tents can be seen at Bedouin village of Khan Al-Ahmar, east of Jerusalem in the occupied West Bank on 16 July 2018 [Shadi Hatem/Apa Images]
August 20, 2018 at 12:02 pm

The legal representative for Khan Al-Ahmar, Tawfiq Jabareen, yesterday presented evidence that the Bedouin village slated for demolition is not illegal because the erection of tents in the area is legal.

The evidence consisted of a map dating from 1942, during the British Mandate era, which showed that Khan Al-Ahmar is located in an area called the Judean Desert Zone. Jabareen explained that "in this area the law says that you are not [prohibited] from building tents and it is still valid today," the Jerusalem Post reported.

This evidence means that Khan Al-Ahmar is not located in an agricultural zone declared Israeli "state land," the key argument put forward by the State in an attempt to declare the village illegal and justify its efforts to demolish the homes of the village's 180 inhabitants. Jabareen, who has submitted three petitions to Israel's Supreme Court in an attempt to prevent the demolition of the village, presented the map during a committee meeting of the Civil Administration near the illegal Israeli Beit-El settlement north of Ramallah.

Many efforts have been made by Jabareen and other lawyers to save Khan Al-Ahmar since it was slated for demolition earlier this year. Israeli occupation forces visited the site on 2 July, taking measurements, inspecting the village's school made of tyres and counting livestock in preparation for the demolition. Residents of Khan Al-Ahmar were then told to leave after the area was declared a closed military zone, and mobile homes were installed in nearby Al-Azariya to relocate them. On 5 July, following international outcry, Israel's Supreme Court delayed the planned demolition.

In July it emerged that Israel had planned the demolition of Khan Al-Ahmar 40 years ago to make way for a "Jewish corridor" of illegal settlements cutting through the occupied West Bank. The demolition of this and several other Palestinian villages would make way for Ma'ale Adumim and Kfar Adumim, two illegal Jewish-only settlements situated on the Jerusalem-Jericho road.

Khan Al-Ahmar is home to Al-Jahhalin Bedouins, who are refugees from the Negev desert and have lived in the area since their displacement by the Israeli army in 1967. Israel has refused to recognise Al-Jahhalin Bedouin communities or grant them building permits, a strategy often used by Israel to term any Bedouin home illegal.

Land Law in the occupied Palestinian territories is derived from a mix of older legal systems, including that of the Ottoman empire which collapsed in 1917 and that of the British Mandate which governed Palestine from 1923 to the 1948 Nakba. Israel often utilises these overlapping laws to declare private Palestinian land "state land", thus enabling the State to forcibly transfer its Palestinian inhabitants. Israeli human rights organisation B'Tselem estimates that "by employing these tactics, between 1979 and 2002, Israel declared more than 900,000 dunums [222,349 acres] as state land. This figure represents a 170% increase in the amount of state land in the West Bank prior to the Israeli occupation."