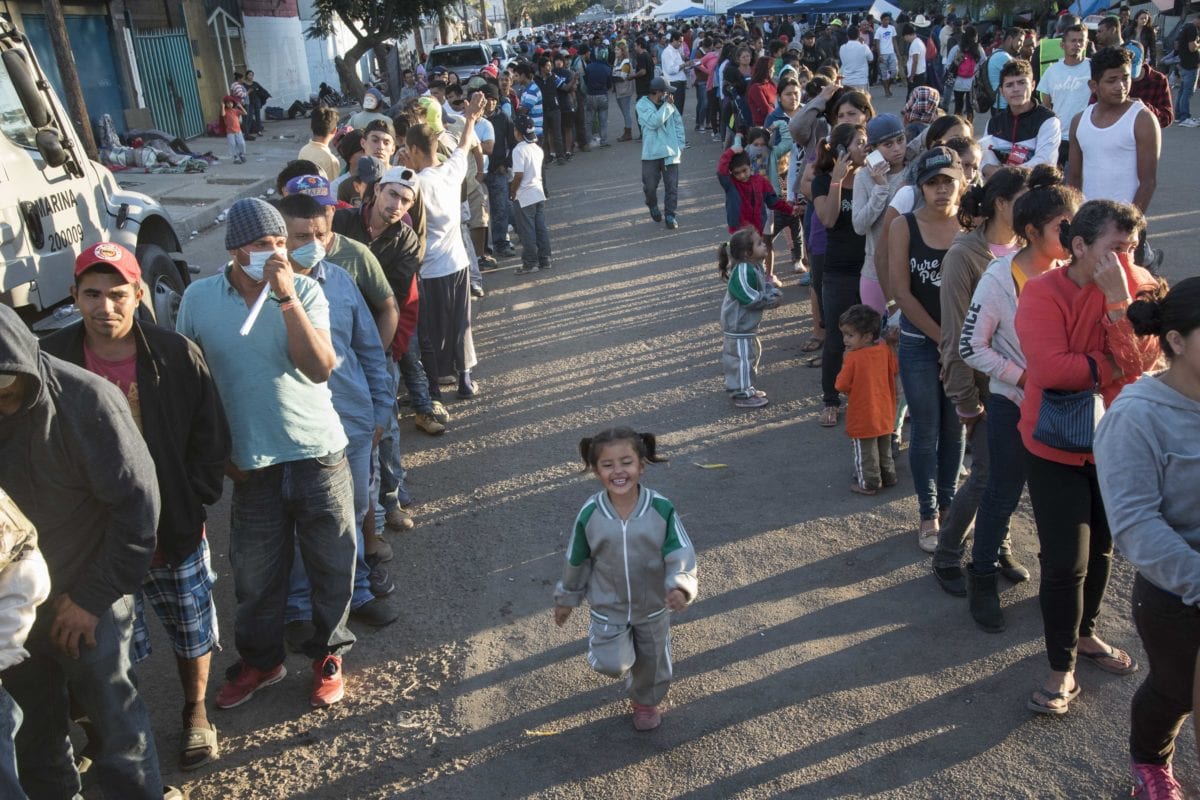 Hundreds of migrants wait in queue for dinner at the Benito Juarez Sports unit where thousands of migrants demand better conditions and push to enter the U.S. in Tijuana, Mexico on November 26, 2018. ( Bruno Gallardo - Anadolu Agency )

This week, two protests by refugees at international borders made major headlines in the news. One group was treated with overwhelming sympathy from politicians and the news media, while the other was brushed aside with widespread disdain.

At the San Ysidro Land Port on the border between Mexico and the United States, more than 500 migrants protested as they sought to force their way into the USA. Many of the protestors included asylum seekers from a caravan of migrants originating in Guatemala, Central America, who claim that the US should open its borders to welcome them too. The migrants were protesting against US President Donald Trump's immigration policies restricting the number of people who can enter the country.

The confrontation at the Mexico-US border became so intense that armed border guards and soldiers on the American side fired tear gas to disperse the migrants, who witnesses said threw rocks and other objects at the guards. The use of tear gas provoked outrage from Democrats and Republicans in the US Congress who said that this was no way to treat people who were seeking to enter the country. There was also sympathetic coverage in the mainstream US news media.

More than 7,600 miles away, a similar protest has been taking place at the nominal border between Israel and the Gaza Strip, but the reactions from US politicians and news media were very different. While border guards along the US border with Mexico restricted their response to the use of tear gas, Israel's reaction was deadly.

READ: 'I did nothing to harm Israel,' says child shot by sniper. 'I only raised the flag'

On 30 March, Palestinians in Gaza launched the Great March of Return protests to commemorate "Land Day", a national programme honouring the six Israeli-Palestinian civilians shot and killed by Israeli police on 30 March, 1976 as they were protesting against government plans to confiscate Arab-owned lands for the sole use of Jews.

Hundreds of Palestinians have gathered at the Gaza-Israel border at various locations every Friday since 30 March this year demanding that Israel should allow them to return to their homes from which they were expelled during the Nakba (Catastrophe) of 1947-1948 and the June 1967 Six Day War. However, instead of using tear gas to disperse the Palestinian protestors, Israeli soldiers have used live ammunition, killing at least 214 Palestinians, mostly civilians, and wounding more than 18,000 others, men, women and children alike.

Most of the protestors were more than 300 yards away from the barbed wire that lines the border when they were shot. Israeli spokespersons asserted that the Palestinians were throwing fire bombs and rocks, although not even a professional American football quarterback could throw a football let alone a heavy rock the distance of three football fields to injure heavily armed Israelis across the border. Nevertheless, Israel continues to claim that protestors are a threat and every Friday kills and wounds more of them. 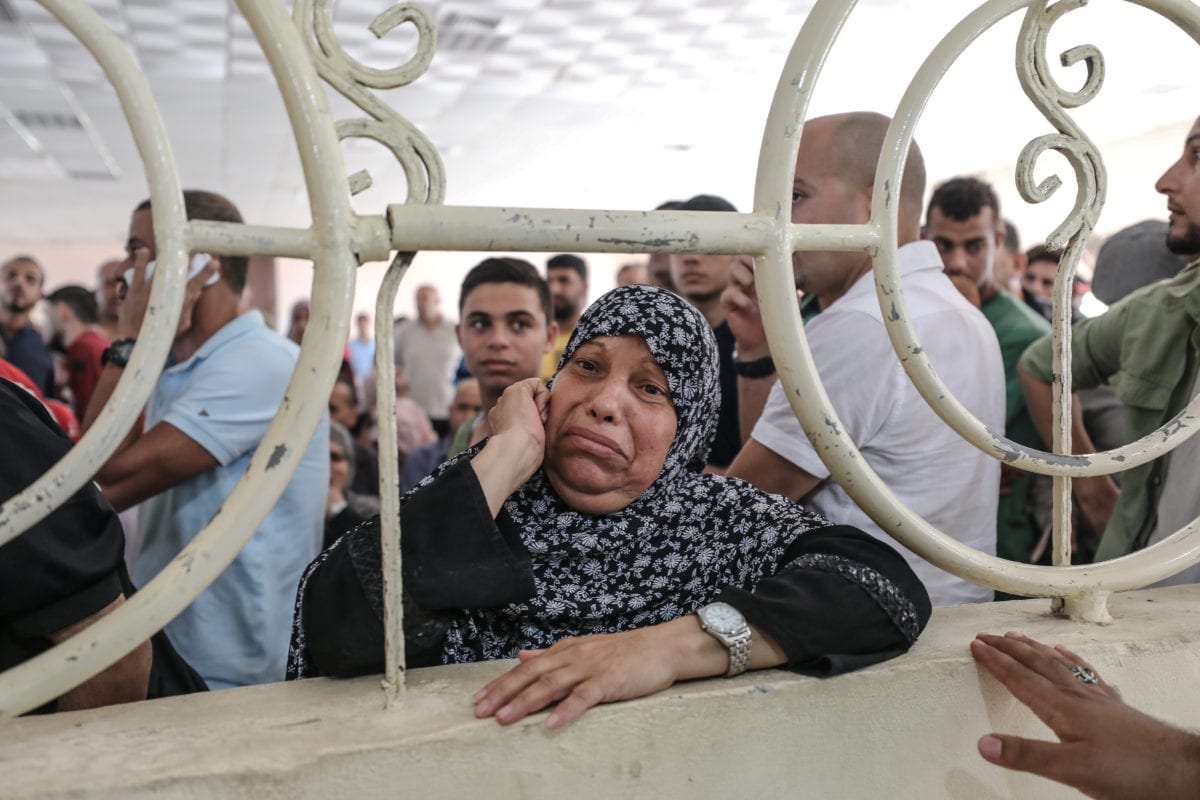 The reactions to the confrontations at the Mexico-US and the Gaza-Israel borders couldn't be more different. When US Senator Brian Shatz, a Democrat from Hawaii, asked if the use of tear gas against the Mexican border protests was "illegal" or "excessive", the Chief of the US Border Patrol, Carla L Provost, defended its use, claiming that the protestors had turned to violence and had thrown rocks at the border guards. None of the Mexico-US protestors were killed, though several were injured. Police arrested 42 of them who managed to cross the border into America.

In response to the killings of Palestinian protestors by Israeli soldiers, the US Ambassador to the United Nations, Nikki Haley, defended the killers and denounced the Palestinians in a debate at the UN Security Council on 15 May. "Who among us would accept this type of activity on your border?" Haley asked. "No one would. No country in this chamber would act with more restraint than Israel has. In fact, the records of several countries here today suggest they would be much less restrained." When Palestinian Ambassador Riyad Mansour responded, Haley joined the Israeli ambassador in leaving the chamber.

Many of the victims of the Israeli snipers in Gaza are journalists, but few of the professional journalist associations in the West have spoken out against Israel's use of deadly force. Silence has been the watchword of the Society of Professional Journalists, the PEW Research Centre, the National Association of Black Journalists and the National Press Club in Washington DC..

READ: 'I thought I knew about Palestine, until I saw the occupation first hand'

On the last occasion that the Society of Professional Journalists stood up to protest against Israel's killing of journalists, in 2002, it was criticised harshly by many pro-Israel members. The society had no qualms, though, about publishing a first-person story about a journalist based in Israel who feared Hamas rockets raining down on their Jerusalem home, or condemning the killing of journalists in every other country from Mexico to Russia (2010).

America's mainstream news media is the first to champion the right of journalists in nearly every country, but cowers in the face of bullying from the American Israel Public Affairs Committee (AIPAC) and Israel's powerful US advocates, and thus avoids any condemnation of Israel's frequent murder of Palestinian journalists in the occupied West Bank and Gaza Strip. The Committee to Protect Journalists reports that between 1992 and 2018, 18 Arab and Palestinian journalists were killed while covering the Israeli-occupied territories.

I really do expect Western and American journalists who claim to be objective, fair and just, to report on and condemn the brutal Israeli violence against Palestinians as loudly as they report on and condemn the relatively superficial violence against migrants at the Mexico-US border. Their failure to do so is a black mark against their professionalism, one that is glaring and obvious.

If the mainstream media did cover the violence against Palestinian in Gaza in the same way that they cover violence against everyone else, maybe more American politicians would find the kind of courage displayed by Senator Rand Paul in standing-up to Israel's human rights violations and abuses.