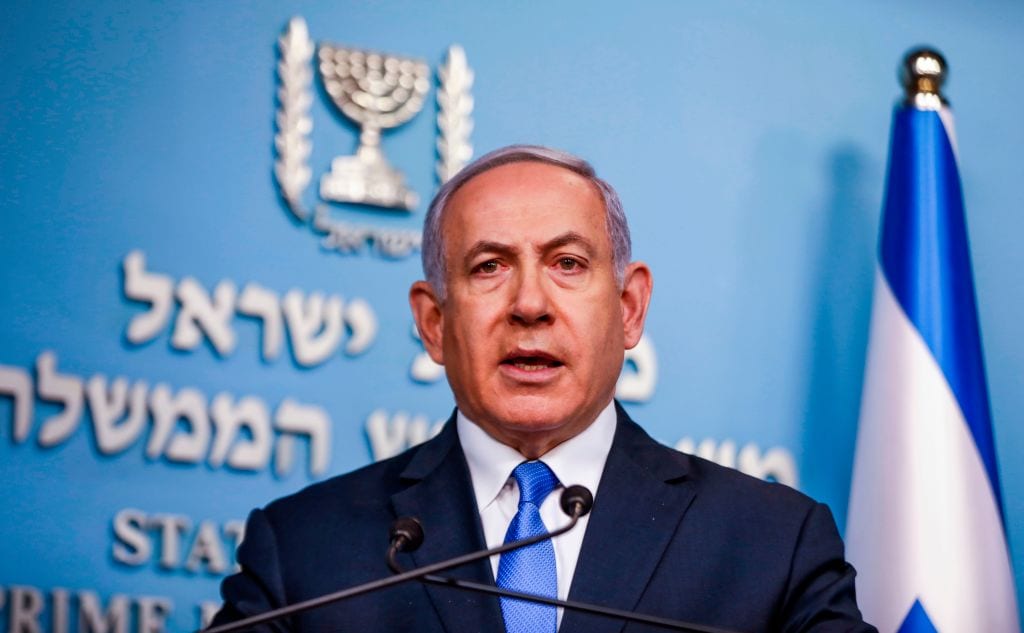 Israeli Prime Minister Benjamin Netanyahu said on Saturday that he would annex Israeli settlements in the occupied West Bank if he wins another term in office, a last-minute pre-election promise likely to enrage Palestinians and the Arab world.

In an interview with Israeli Channel 12 News three days ahead of the 9 April poll, Netanyahu was asked why he had not extended sovereignty to large West Bank settlements, as Israel did without international recognition in east Jerusalem and the Golan Heights, both captured in the 1967 Middle East war.

"Who says that we won't do it? We are on the way and we are discussing it," Netanyahu said.

"You are asking whether we are moving on to the next stage – the answer is yes, we will move to the next stage. I am going to extend (Israeli) sovereignty and I don't distinguish between settlement blocs and the isolated settlements."

The veteran right-wing Israeli leader, who has dominated Israeli politics for a generation, is fighting for his political survival against former top general Benny Gantz, a political novice campaigning on a centrist platform.

Netanyahu has cast Gantz as a weak leftist who would endanger Israel's security by giving territorial concessions to the Palestinians.

But Netanyahu, who has fought the election campaign under the shadow of corruption allegations, is also competing for votes with far-right parties who advocate annexation. His comments are likely to appeal to hardline voters, who oppose ceding lands.

Saeb Erekat, the chief Palestinian negotiator and a close aide to Palestinian President Mahmoud Abbas, said: "Israel will continue to brazenly violate international law for as long as the international community will continue to reward Israel with impunity, particularly with the Trump Administration's support and endorsement of Israel's violation of the national and human rights of the people of Palestine."

"Netanyahu's dreams of annexing the West Bank will never be achieved and we will not allow that to happen," he said.

"It is time for (the PA) to stop security coordination with the occupation, and to get united in the face of the challenges."

Settlements are one of the most heated issues in efforts to restart Israeli-Palestinian peace talks, frozen since 2014.

After decades of settlement-building, more than 400,000 Israelis now live in the West Bank, according to Israeli figures, among about 2.9 million Palestinians according to the Palestinian Statistics Bureau.

A further 212,000 Israeli settlers live in East Jerusalem, according to the United Nations Office for the Coordination of Humanitarian Affairs.

The Palestinians and many countries consider settlements to be illegal under the Geneva conventions that bar settling on land captured in war. Israel disputes this, citing security needs and biblical, historical and political connections to the land.

Netanyahu's remarks follow a series of announcements and policy changes by US President Donald Trump that were seen to favour Israel.

In March, Trump broke with decades of international consensus by recognising Israeli sovereignty over the Golan Heights, territory Israel captured from Syria.

That followed his December 2017 decision to recognise Jerusalem as the capital of Israel and to move the US embassy there. Both moves delighted Israel, infuriated Palestinian and Arab leaders, and were opposed by most US allies.

With Trump's moves on Jerusalem and The Golan, the Israeli leader may feel emboldened to advocate for annexation.

US officials have said they would unveil a long-awaited Trump administration Middle East peace plan after the Israeli election, but prospects to restart negotiations appear dim.

The Palestinians have been boycotting the Trump administration over its Jerusalem moves and other recent decisions they view as pro-Israel bias.

Ya'alon: Israel is weak in the face of Hamas

The US State Department declined to comment about Netanyahu's remarks, which were viewed in the Israeli media as an attempt to draw right-wing votes rather than an immediate change of policy.

Netanyahu has been plagued by corruption allegations throughout the election campaign after Israel's attorney general publicly announced in February that he intends to indict Netanyahu.

Netanyahu has denied any wrongdoing in three cases of alleged bribery and fraud, but the allegations could cloud his political future and that of any government he might head, possibly leading to a new election.

His main election rival, Gantz, has vowed to pursue peace with the Palestinians, but he has also stopped short at embracing their quest for statehood.

A spokeswoman for Gantz declined to comment on Netanyahu's remarks.

On Friday, the last day polling is allowed, Gantz's centrist Blue and White party was projected to take 30 seats, more than the 26 forecast for Netanyahu's right-wing Likud, according to a poll in Yedioth Ahronoth newspaper.

But this and other polls also projected a majority of the Knesset's 120 seats will go to the parties in Netanyahu's right-wing bloc, giving Netanyahu a slim but workable majority.

A few days before the previous Israeli election in 2015, Netanyahu vowed there would never be a Palestinian state under his watch but then backtracked on that statement after a rebuke from Trump's predecessor, Barack Obama.

Last year, however, Netanyahu told members of his right-wing Likud party that Israel and the United States were discussing the possibility of Israel annexing settlements. The White House swiftly denied that.

While vowing that he would not evacuate settlers from their homes, Netanyahu has also said in the past that the future of the settlements should be determined in peace talks with the Palestinians.