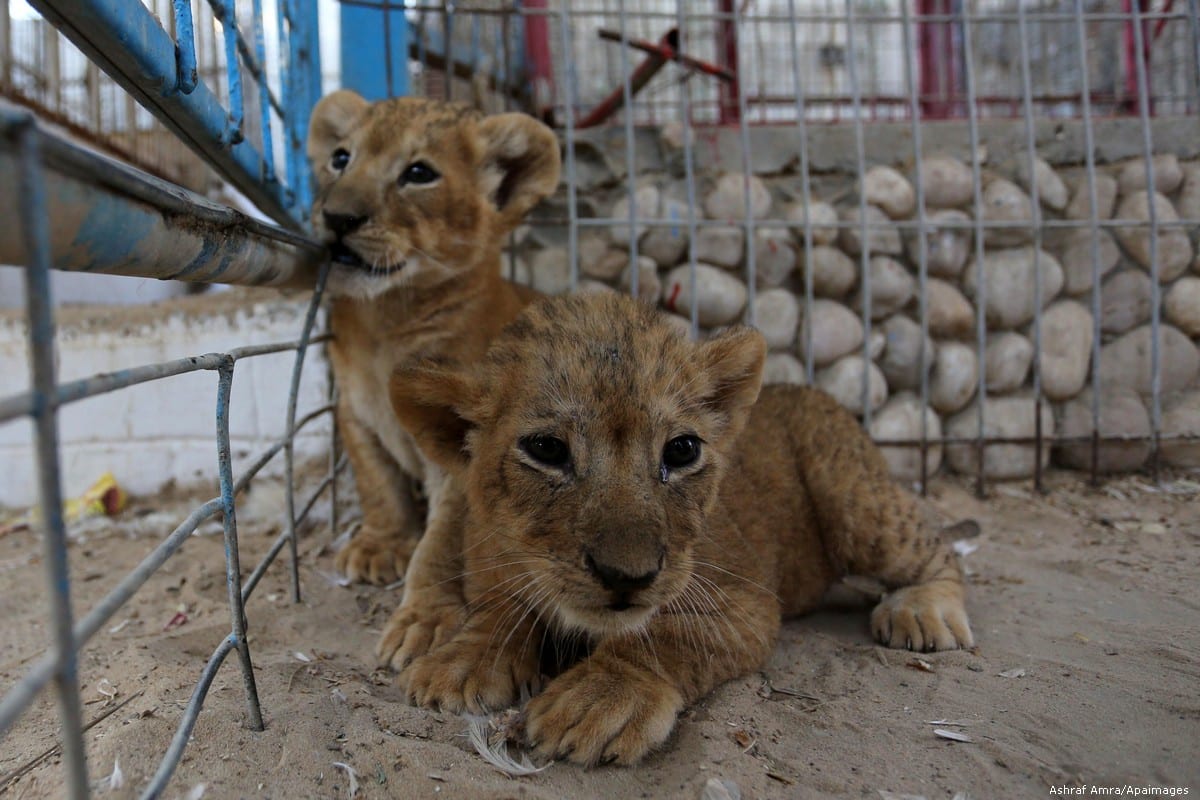 Animal rights activists are furious that a zoo in the Gaza Strip which was shut down earlier this year because of the poor conditions has reopened with lions billed as the main attraction. The big cats were apparently smuggled into the tiny Palestinian enclave via tunnels from Egypt recently.

Personally, I think all zoos should be closed down, but this particular story in Britain's Times newspaper — headlined "'Cruel' Gaza zoo reopens with smuggled lions as star attraction" — exposes the rank hypocrisy of the Western media and the value placed on Palestinian lives. The fact that more than two million Palestinians are crammed in to what is often described as the largest open-air prison in the world is not mentioned in the story.

Nor is the brutal siege imposed by Israel on the Gaza Strip, even though the blockade covers land, air and sea, and keeps nearly 40 per cent of the population in dire poverty. And is, no doubt, responsible for the poor condition of zoo animals.

Israel is denying Palestinians their basic human rights in contravention of international law, which amounts to collective punishment. Nevertheless, the Zionist state maintains the blockade aided and abetted by Egypt and its friends in the West, and is therefore directly responsible for the grinding poverty and misery affecting the Palestinians.

Apart from basic imports and exports, Israel also restricts all movement of people in and out of Gaza regardless of their need for life-saving medical care or if they are invited to attend academic, sporting or business events. Agricultural land is attacked regularly by Israel, with the crops destroyed in bombing raids, and Gaza's territorial waters are the only place in the Mediterranean Sea where gunboats patrol and fire on fishermen going about their lawful business. That is how Israel maintains its naval blockade of the enclave.

The Times article makes no mention of the fact that the water supply in Gaza is virtually undrinkable, nor that this is down to the Israelis destroying the water and sewage infrastructure and other vital facilities, and then preventing spare parts from being imported. Electricity supplies are sporadic, with power cuts for hours on end every day. This has catastrophic effects on hospitals, for example, where vital treatment is disrupted when the power cuts happen. Electrical generators intended for short-term emergency use are expected to take up the slack, and they too break down with increasing frequency. And, you've guessed it, Israel will not allow spare parts to be imported. 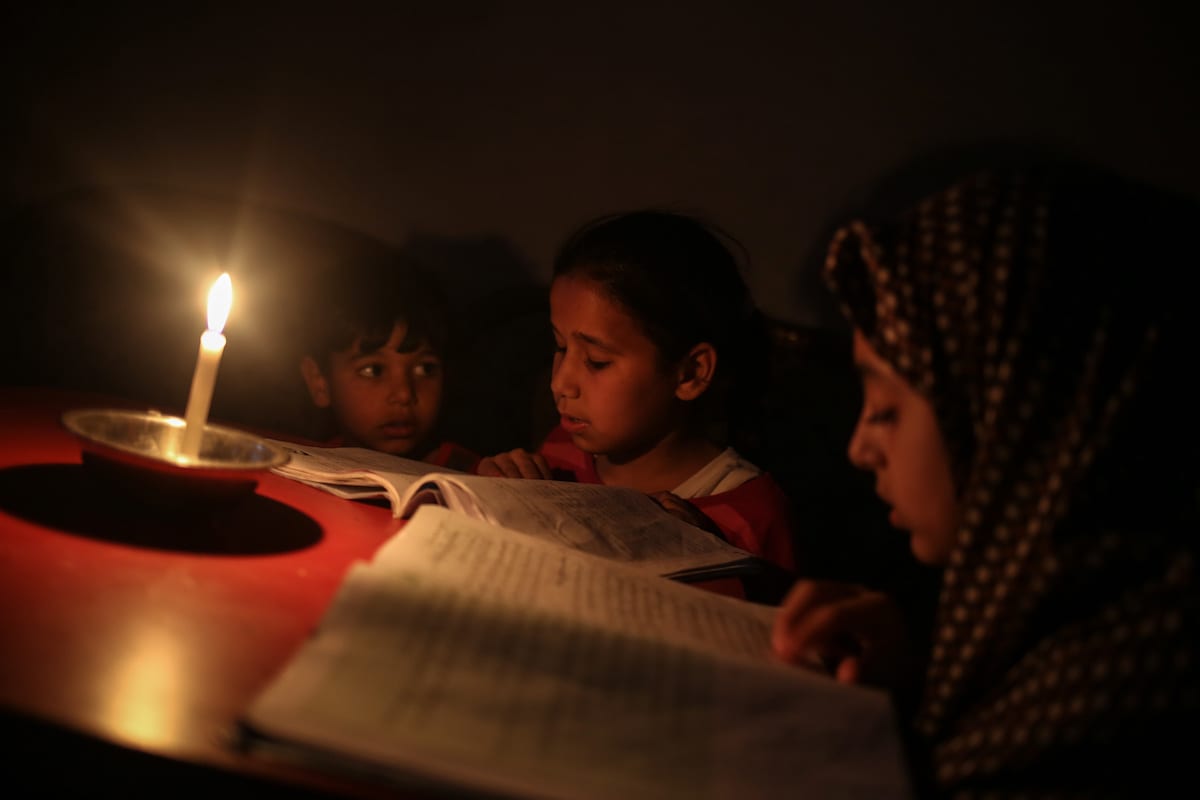 Moreover, Israel regularly violates international laws and human rights in other, more deadly, ways. Its snipers have shot and killed more than 200 men, women and children in the Gaza Strip since the start of the Great March of Return protests in March last year; tens of thousands have been wounded, many with life-changing injuries. Accusations of war crimes against civilians have been made, but Israel is allowed to act with impunity by the international community.

Thousands of people, many of them children, risk their lives daily while smuggling goods through the tunnels under the border with Egypt. Once described as "Gaza's lifeline", for many Palestinians the tunnels are the only way to take construction materials, medicines and food into the coastal territory, where thousands of families still live in makeshift shelters following three major Israeli military offensives over the past decade.

Hence, while I refuse to condone any inhumane treatment of animals anywhere, I do wish that newspapers like the Times would put the lives and treatment of the Palestinians on a par with our own; they are, after all, fellow human beings. Sadly, though, it seems that the well-being of peacocks, lions and monkeys are far more important to the editor of the Times than the welfare of Palestinian men, women and children. This says a lot about the newspaper's target audience as well.

The charity Four Paws has sent a letter to the Ministry of Agriculture in Gaza asking it to confiscate the animals from the newly reopened zoo. "The new images from Rafah zoo are very disturbing," a spokesman for the organisation, Martin Bauer, told the Times. "The new animals are being kept in conditions that are inappropriate for their species. They do not look healthy and instead seem to be urgently in need of medical help and food." I wonder where Mr Bauer expects the ministry to get the food, medicines and equipment necessary to keep the confiscated animals in better conditions. Perhaps he should have addressed his letter to the Israeli government instead. 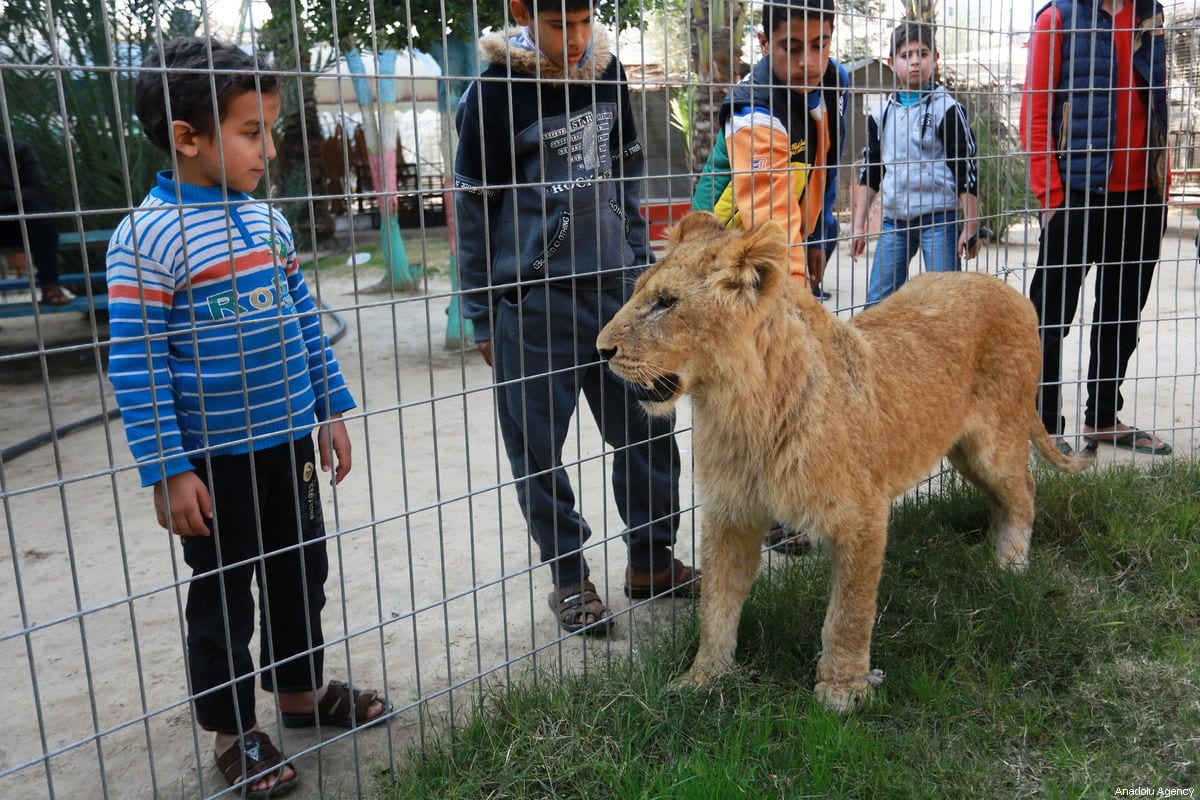 Palestinian children look through the fence of a lion cage at the Rafah Zoo in Gaza City, Gaza on 13 February 2019 [Abed Rahim Khatib/Anadolu Agency]

Furthermore, wouldn't it be wonderful if there were charities in the world today that attracted as much positive media attention after focusing on the wellbeing of the good citizens of Gaza who are also being kept by the brutal Israeli siege in conditions that are inhumane? They too are "urgently in need of medical help and food", with children suffering from malnutrition and basic food and medicines in desperately short supply. Instead, charities which seek to help the Palestinians are targeted with sanctions and accused of "supporting terrorism". This disparity in the way that such organisations are treated really is a disgrace.

There are two million Palestinians in the Gaza Strip staring into the abyss of a humanitarian catastrophe which is set to make this tiny scrap of Palestine "unliveable" by next year, so why doesn't the Times take an interest in that appalling reality? Animal cruelty should never be trivialised, but the critics of the conditions in that small zoo in the Gaza Strip really have exposed the value that is placed on Palestinian lives. We should be ashamed of ourselves for allowing this to happen to men, women and children, as well as animals.